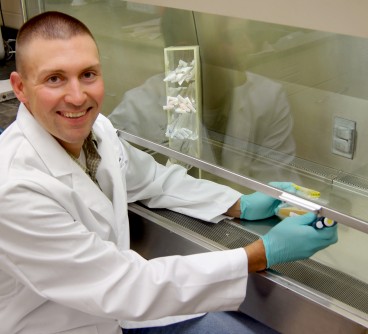 Newswise — MANHATTAN, Kansas — He calls himself the bug hunter, but the target of his work consists of viruses that can only be found and identified with special methods and instruments. Benjamin Hause, an assistant research professor at the Kansas State Veterinary Diagnostic Laboratory at Kansas State University, recently published an article about one of his discoveries, porcine enterovirus G, which is an important find in the United States.

"We had isolated a virus in cells, but didn't know what it was," Hause said. "We used next-generation sequencing to identify it, and it turned out to be porcine enterovirus G, which had been described before but had never previously been found in North America."

The virus is thought to be benign and is not known to cause disease, but it had only been reported before in Europe and Asia.

"Fortunately porcine enterovirus G doesn't do much in pigs, but it raises concerns about other viruses getting through the border," Hause said. "We're not sure if this has been here for some time undetected or is a recent introduction. Coincidentally, the virus was most similar to 2012 Chinese isolates and was detected around the same time as a couple of other viruses: porcine epidemic diarrhea virus and porcine deltacoronavirus, both of which were detected in China in the same time frame prior to the U.S."

Both porcine epidemic diarrhea virus and porcine deltacoronavirus have caused major economic losses to hog producers in North America and are impacting several other aspects of the swine industry. Hause has mapped these viruses at the Kansas State Veterinary Diagnostic Laboratory as a way to ensure the reliability of the next-generation sequencing methods he uses to identify and characterize pathogens. The technique will soon be offered at the laboratory.

"As we isolate viruses, we can completely sequence their genomes," Hause said. "We can get a good understanding of what makes those viruses tick. Next-generation sequencing goes farther and allows us to perform metagenomic sequencing where we don't isolate the virus. Instead, we can sequence all DNA contained in a sample, which includes the host DNA, plus it reads all of the viruses in the sample too. It's a universal method to detect viruses that we have adapted and applied to veterinary diagnostics."

Hause's most recent work has led to the discovery of an influenza virus in cattle.

"A swine sample came in that we thought was influenza, but all other tests were negative," Hause said. "We found instead that this was an entirely new type of influenza. Subsequent research has shown that it is widespread in cattle, not just pigs. Now we're studying the association of this strain of bovine influenza with respiratory disease in feedlots."

Before joining Kansas State University in May, Hause was the diagnostic lab director at Newport Labs in Worthington, Minnesota. He worked on his porcine enterovirus G paper with Richard Hesse, a diagnostic virologist at the Kansas State Veterinary Diagnostic Laboratory, who helped recruit Hause to the university to further develop his next-generation sequencing methodology, which has other benefits from identifying and characterizing pathogens.

"As a virus mutates and changes, next-generation sequencing can be used to help update vaccines so they are still effective," Hause said. "Through this technology we can build a database with a collection of viruses based on where they came from and what kind of clinical presentation was seen. Then we can mine that dataset to match the vaccines or to get additional information on the pathogen. Some diseases such as flu mutate and change rapidly, and can jump from humans to pigs and back to humans, so it's important for both animal health and human health that we monitor and understand these viruses as much as possible."

The article on porcine enterovirus G, "First Identification and Characterization of Porcine Enterovirus G in the United States," was published in the journal PLOS ONE, http://bit.ly/1t3IfzL.