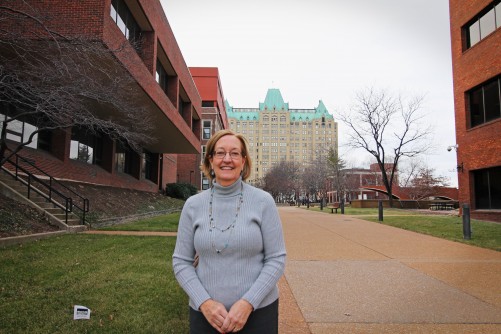 Helen Lach, Ph.D., professor of nursing at Saint Louis University, says her research about falling has helped her recover from breaking her ankle.

Newswise — Helen Lach, Ph.D., professor of nursing at Saint Louis University, has spent a quarter of a century studying the debilitating impact taking a tumble can have on the lives of senior adults.

The 61-year-old nurse who specializes in geriatrics became a victim of her own scholarship when she slipped on a wet hill in August and broke her ankle. In an instant, her life changed.

“Most older people fear breaking a hip, an injury so serious that only a third of those older than 65 fully recover,” Lach said.

“However, you don’t hear as much about other injuries For instance a broken ankle keeps you off your feet longer than a hip. It’s something I’ll be exploring in the future.”

Breaking her ankle reinforced the importance of exercise for Lach, who always has been fairly fit. She’s back to walking on a treadmill, stretching and doing strengthening exercises, thanks to help from her physical therapist.

“The better shape you’re in going into an injury, the easier it is to manage and recover. Muscle strength and exercise really are the magic bullets for life.”

Breaking her ankle has taught Lach other lessons:• Keep your cell phone nearby in case of emergency. • Tone those arms, lift those soup cans. Lach found it easier to use crutches because her arms were strong. • Plan ahead. Know who might bring you groceries or walk your dog if you are laid up. • If inclement weather is predicted, buy ice melt, bread, milk, eggs and other essentials, such as medications.• Stay put during an ice storm. Going out when it’s icy is risky for anyone, and particularly for those who aren’t moving as well as they might.• Call for carryout. You can get almost anything delivered and shop online.• Know your environment. Some places are easier to navigate for those who have disabilities. You’ll learn where to park and where elevators replace stairs. • Be patient and work hard. Getting over an injury takes time and effort. Lach was on crutches and didn’t bear any weight on her ankle for nearly three months. She is now is walking without any devices – four months after her injury.• Make sure your footwear matches the terrain you are going to be walking on. Sandals with smooth soles were not the best choice for wet grass.

Lach studies how fear of falling can perpetuate a cycle that causes poor health. A person breaks a bone and becomes afraid it could happen again, doesn’t move around, then becomes frail and more likely to fall.

That isn’t going to happen to Lach.

“I’m more aware of falling,” she said. “But I want to get back to my normal life. There are things I wouldn’t do right now, but I should be able to do them by summer because I’ll be stronger and better. It takes time.”