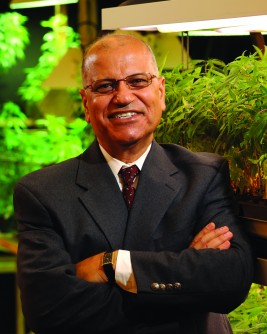 Newswise — OXFORD, Miss. – Each year nearly 50 million Americans develop an annoying skin rash after coming in contact with poison ivy. But University of Mississippi researchers are working on a pharmaceutical product to rein in the allergic reaction in people already sensitive to the plants and prevent it altogether in those who aren't.

The product contains chemical derivatives of urushiol (u-ROO-she-ol), the oily substance in poison ivy, oak and sumac that causes skin to become inflamed.

"It certainly works in guinea pigs, the closest model you can find to humans," said Mohammad K. Ashfaq, a veterinarian and senior scientist in the National Center for Natural Products Research at the UM School of Pharmacy.

The mastermind behind the product is NCNPR research professor Mahmoud A. ElSohly, who is president and director of ElSohly Laboratories Inc. of Oxford. The compounds were produced by ELI's synthetic chemist Waseem Gul, and development studies were conducted at ELI and NCNPR with more than $800,000 from the National Institutes of Health Small Business Technology Transfer Program, or STTR.

ElSohly worked on a similar product in the 1980s, when he and two other Ole Miss scientists developed an oil-based prophylactic treatment. It, too, worked in guinea pigs and was licensed to a pharmaceutical company before hitting a snag.

"The problem we ran into was that the licensee wanted to use an oral route for delivery, and the compounds didn't work well when administered orally," ElSohly said.

ElSohly recently went back to the drawing board and came up with the idea for the new urushiol derivatives, which are water-soluble, and the university filed for a new patent and licensed the technology to a company for development.

Two of the new derivatives have been selected for continued development at NCNPR, ElSohly said. They have good long-term stability in aqueous solution, and they will be administered intramuscularly, like a flu shot.

"Stability is an important factor," he said. "The material must have a long shelf life to become a marketable product. We project our product will be stable for at least two years."

The next step, he said, is to determine the minimum dose that produces desensitization in humans and, in conjunction with the company that licensed the technology, complete required preclinical studies, then move on to clinical trials.

The derivatives made at ELI were sent to NCNPR scientists, who proved their efficacy in guinea pigs. In addition to determining the drug's minimum effective dose, they are also unraveling its mechanism of action with the help of Mohamed Abdel-Bakky, a UM postdoctoral research associate.

Hypersensitivity to poison ivy develops with repeated exposure to the plants, Ashfaq said.

"The first time people are exposed, there is no reaction," he said. "The second time they are exposed, they get the flared reaction typical of poison ivy dermatitis – the redness and blistering."

"This is an exciting product," Manly said. "We hope to soon be in a clinical trial."

For more information on research programs at NCNPR, go to http://www.pharmacy.olemiss.edu/ncnpr/index.html.

For more news from the University of Mississippi, visit http://www.ezing.net/-30-