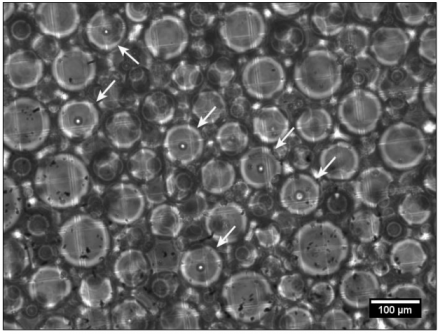 Immortalized B cells encapsulated in emulsion droplets may lead to a therapy for mono.

Newswise — LAWRENCE — A research lab at the University of Kansas School of Engineering and School of Pharmacy is analyzing the genetics of human immune responses to develop the basis of an effective vaccine or drug therapy against Epstein-Barr Virus, or EBV, the pathogen that causes mono and infects around 90-percent of adults worldwide.

The virus, which commonly spreads during teen years and young adulthood via kissing, has hit-or-miss health consequences. In some people, EBV causes infectious mononucleosis and can induce cancers like gastric carcinoma or nasopharyngeal carcinoma in later years — while in others the virus is successfully suppressed by the immune system. No EBV vaccine has been approved by the FDA, and the mechanisms of immune protection from EBV-associated diseases are still unclear.

“We are applying recently developed technologies to address an age-old problem,” said Brandon DeKosky, assistant professor of chemical and petroleum engineering and pharmaceutical chemistry at KU, who is leading the effort. “Why do some people infected with Epstein-Barr Virus have a terrible time and get infectious mononucleosis for months, while others are completely asymptomatic and don’t even know they have the virus?”

With a recent $1.8 million, five-year grant from the National Institutes of Health, DeKosky’s lab is using high-throughput techniques to analyze the behavior of B cells in the body. A vital part of our immune system, B cells are white blood cells specialized to bind to specific antigens, such as EBV, and produce antibodies that neutralize foreign agents.

“Each of us has around 100 billion B cells, and each one is playing its own unique role in protecting us from disease,” DeKosky said. “My lab looks at single B cells en masse to figure out which one is doing what — and we try to use that molecular-scale information to address larger questions of why one person is protected, why another person might feel sick, and what’s happening with the immune system in both situations.”

The KU researcher first isolates B cells that are reactive to EBV, which is a complicated task due to the sheer numbers of cells involved. DeKosky’s team has honed an innovation that mixes millions of B cells into an emulsion to pinpoint those tailored to fight EBV.

“Instead of taking single B cells and putting one per tube, which is the traditional and more time-consuming method, we put cells into emulsion droplets, which are droplets of water separated from each other by oil — just like salad dressing,” DeKosky said. “Imagine you have a million B cells isolated from a patient, and if you put them in shaken-up salad dressing you now have a million cells isolated into their own individual compartments. Then we take genetic material from each of those single cells in each of those droplets — you can call them micro-reactors. Just one person in one afternoon can screen millions of B cells at the single-cell level using this technology.”

The project will track “longitudinal samples” of B cells, meaning they follow participants’ immune systems over time to see differences across different people, and they also study how a person’s immune system changes as they progress from initial acute infection to long-term immune suppression of the virus.

“This class of viruses infects people for life, so it has an initial infectious stage and eventually goes latent but can reactivate in some cases, for example if a person is ever immunocompromised like after a transplant or similar settings,” DeKosky said.

DeKosky’s lab collaborates with Dr. Henry Balfour, Jr. at the University of Minnesota, who has performed large-scale studies drawing blood samples from college-age students undergoing primary EBV infection. This unique sample set allows project researchers to study the role of B cells and how it corresponds to the severity of disease, ranging from asymptomatic primary infection in some cases, to others where a study patient was bedridden or even hospitalized with severe mono.

Once B cells reactive to EBV are isolated, DeKosky’s lab subjects them to DNA sequencing to grasp why some patients are protected from diseases triggered by EBV while others suffer from health issues. A genetic blueprint of the critical features of B cells that defend against EBV is anticipated and could lead the way toward new strategies to combat the virus.

“We’re trying to reverse engineer the body’s own defenses,” DeKosky said. “If we identify antibody signals in patients that are really promising, that could give us the critical molecular clues needed to develop targeted vaccines or therapies.”

Other research partners at KU include David Davido, Luke Huan and Zsolt Talata. Several collaborators at the National Institutes of Health are involved in the work as well.

The researchers anticipate the technological approach used here to better understand immune protection from EBV soon will be applied to a host of other ailments.

“We started with EBV because we have this really fantastic sample set where we can look for differences in molecular features of patient immunity matched with their clinical outcomes,” said DeKosky. “We are using this first project to develop the workflow that can be applied not just to EBV but to many other human diseases.”