Rate of this relatively treatable cancer is four to five times higher among women in jails or prisons than in women who aren't incarcerated.

28-May-2014 10:00 AM EDT, by University of Kansas Cancer Center contact patient services
favorite_border 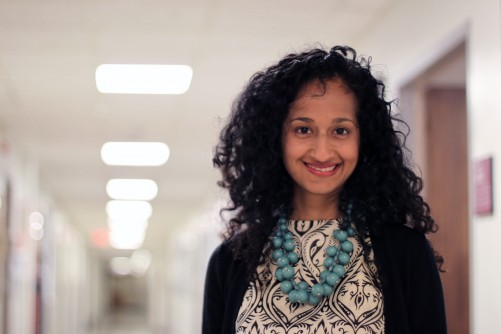 Newswise — Researchers at the University of Kansas Medical Center will use a $1.5 million grant from the National Cancer Institute to examine ways to lower the rates of cervical cancer among incarcerated women.

Megha Ramaswamy, Ph.D., M.P.H., assistant professor of preventive medicine and public health and a member of The University of Kansas Cancer Center's Cancer Control and Population Health Program, will lead the new project. Ramaswamy has done extensive research into why cervical cancer rates are four to five times higher among women in jails or prisons than in women who aren't incarcerated.

"It's pretty treatable if women get Pap screenings once every three years. Doctors can detect cancerous cells, and then women can get treated," Ramaswamy says.

Ramaswamy and her collaborators conducted an earlier research study that attempted to understand incarcerated women's experiences with Pap tests and follow-up.

"The findings of that study showed that these women indeed had incredible deficits in knowledge. They also had problems with self-efficacy and confidence navigating the system. In many cases, they also lacked money, transportation and social support," she says.

For many incarcerated women, their lives are complex already. About a third of the incarcerated women that the researchers previously surveyed lacked a high school degree, 85 percent smoked cigarettes and more than two-thirds reported substance dependence. More than 60 percent had dealt with childhood violence, and about half had experienced intimate partner violence as well.

Ramaswamy and colleagues also found that half of the women they've surveyed in previous studies were from some of the poorest areas of Kansas City, specifically in urban cores of Wyandotte County and Kansas City, Mo. These areas are characterized by high rates of poverty, racial/ethnic segregation, violence, and crime.

The new study will follow 100 incarcerated women in Wyandotte County and 100 women in Jackson County for three years. The researchers will test whether a 10-hour interactive session conducted over a weeklong period in jail will help women increase their reproductive health knowledge and lead to positive changes in health behaviors. In five two-hour interactive sessions with a facilitator, women will be able to ask questions about their situation and will receive information about risk factors, navigating health care services in Kansas City and other important information. The women will also be able to discuss their fears and beliefs about sexual health.

Ramaswamy says that while it may seem like a simple solution, she and her team will also work over three years to tease out the complex set of factors related to the women's health behaviors.

After following the study participants that long, Ramaswamy said that they will be able to help answer key questions that still remain about sexual and reproductive health care for women with criminal justice histories, which is relatively understudied in medical research, she says.

Ramaswamy was awarded the grant after participating in a career development program for junior faculty members through Frontiers: The Heartland Institute for Clinical and Translational Research.

"That program is great because it buys young investigators time," Ramaswamy says.