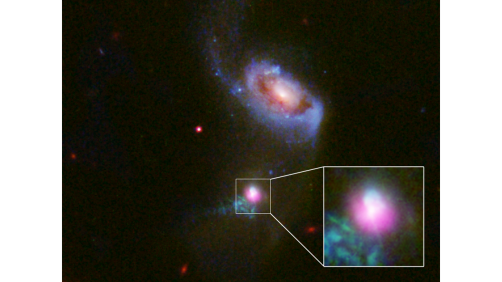 HOME OF FLICKERING BLACK HOLE. This is an image of galaxy SDSS J1354+1327 (lower center) and its companion galaxy SDSS J1354+1328 (upper right). The inset panel to the right is a four-color image that combines Hubble Space Telescope red, green, and blue filtered exposures with Chandra X-ray Observatory observations colored purple. The Hubble image shows the northern bubble of hot ionized gas in the vicinity of a supermassive black hole. The black hole appears to have blasted out jets of bright light from gas it's accreting from the companion galaxy. This happened twice in the past 100,000 years. While astronomers have predicted such objects can flicker on and off as a result of gas-feeding events, this is the first time one has convincingly been caught in the act. The galaxy pair is 800 million light-years from Earth.

Newswise — Astronomers have caught a supermassive black hole in a distant galaxy snacking on gas and then "burping" — not once, but twice.

The galaxy under study, called SDSS J1354+1327 (J1354 for short), is about 800 million light-years from Earth. The team used observations from NASA's Hubble Space Telescope, the Chandra X-ray Observatory, as well as the W.M. Keck Observatory in Mauna Kea, Hawaii, and the Apache Point Observatory (APO) near Sunspot, New Mexico.

Chandra detected a bright, point-like source of X-ray emission from J1354, a telltale sign of the presence of a supermassive black hole millions or billions of times more massive than our Sun. The X-rays are produced by gas heated to millions of degrees by the enormous gravitational and magnetic forces near the black hole. Some of this gas will fall into the black hole, while a portion will be expelled in a powerful outflow of high-energy particles.

By comparing X-ray images from Chandra and visible-light (optical) images from Hubble, the team determined that the black hole is located in the center of the galaxy, the expected address for such an object. The X-ray data also provide evidence that the supermassive black hole is embedded in a heavy veil of dust and gas.

The results indicate that in the past, the supermassive black hole in J1354 appears to have consumed, or accreted, large amounts of gas while blasting off an outflow of high-energy particles. The outflow eventually switched off then turned back on about 100,000 years later. This is strong evidence that accreting black holes can switch their power output off and on again over timescales that are short compared to the 13.8-billion-year age of the universe.

"We are seeing this object feast, burp, and nap, and then feast and burp once again, which theory had predicted," said Julie Comerford of the University of Colorado (CU) at Boulder's Department of Astrophysical and Space Science, who led the study. "Fortunately, we happened to observe this galaxy at a time when we could clearly see evidence for both events."

So why did the black hole have two separate meals? The answer lies in a companion galaxy that is linked to J1354 by streams of stars and gas produced by a collision between the two galaxies. The team concluded that clumps of material from the companion galaxy swirled toward the center of J1354 and then were eaten by the supermassive black hole.

The team used optical data from Hubble, Keck, and APO to show that electrons had been stripped from atoms in a cone of gas extending some 30,000 light-years south from the galaxy’s center. This stripping was likely caused by a burst of radiation from the vicinity of the black hole, indicating that a feasting event had occurred. To the north they found evidence for a shock wave, similar to a sonic boom, located about 3,000 light-years from the black hole. This suggests that a burp occurred after a different clump of gas had been consumed roughly 100,000 years later.

"This galaxy really caught us off guard," said CU Boulder doctoral student Rebecca Nevin, a study co-author who used data from APO to look at the velocities and intensities of light from the gas and stars in J1354. "We were able to show that the gas from the northern part of the galaxy was consistent with an advancing edge of a shock wave, and the gas from the south was consistent with an older outflow from the black hole."

Our Milky Way galaxy's supermassive black hole has had at least one burp. In 2010, another research team discovered a Milky Way belch using observations from the orbiting Fermi Gamma-ray Observatory to look at the galaxy edge on. Astronomers saw gas outflows dubbed "Fermi bubbles" that shine in the gamma-ray, X-ray, and radio wave portion of the electromagnetic spectrum.

"These are the kinds of bubbles we see after a black hole feeding event," said CU postdoctoral fellow Scott Barrows. "Our galaxy's supermassive black hole is now napping after a big meal, just like J1354’s black hole has in the past. So we also expect our massive black hole to feast again, just as J1354's has."

Other co-authors on the new study include postdoctoral fellow Francisco Muller-Sanchez of CU Boulder, Jenny Greene of Princeton University, David Pooley from Trinity University, Daniel Stern from NASA's Jet Propulsion Laboratory in Pasadena, California, and Fiona Harrison from the California Institute of Technology.

A paper on the subject was published in a recent issue of The Astrophysical Journal and is available online. Comerford presented the team’s findings in a January 11th, 2018 press briefing at the 231st meeting of the American Astronomical Society held in Washington D.C.

For images of J1345 and more information about this study and Hubble and Chandra, visit: