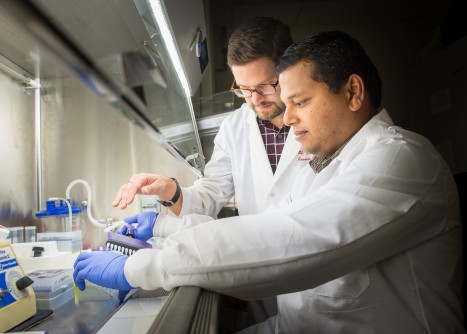 Newswise — Scientists from St. Jude Children’s Research Hospital and Fred Hutchinson Cancer Research Center have developed an algorithm that functions like a Rosetta Stone to help decipher how the immune system recognizes and binds antigens. The research, which appears today as an advance online publication in the journal Nature, should aid development of more personalized cancer immunotherapy and advance diagnosis and treatment of infectious diseases.

The immune system depends on molecules called T cell receptors on the surface of T cells to recognize and respond to foreign antigens from virus-infected cells, tumors and other threats. Genomic rearrangement means that a large number of different T cell receptors are possible. Each person can have about 100 million different receptors, referred to as their T cell repertoire, with little overlap even in identical twins. Each receptor in the repertoire is capable of recognizing a different antigen and rallying the immune response to address that threat.

“Until now, this amazing diversity has thwarted efforts to categorize T cell receptors that recognize and respond to the same antigen,” said Paul Thomas, Ph.D., an associate member of the St. Jude Department of Immunology. He and Philip Bradley, Ph.D., of Fred Hutchinson Cancer Research Center and the University of Washington in Seattle, are co-corresponding authors of the research.

“That has hampered not only understanding of immune recognition but also our ability to use the immune system more effectively to target new viruses or mutations driving tumor cells,” Thomas said. “With this algorithm we have a system to identify critical features of T cell receptors that recognize the same antigen and how they interact. That lays the groundwork for designing receptors to recognize cancer or new viruses.”

The algorithm was built using tools the researchers developed to define how T cell receptors recognize a part of the antigen called the epitope. Epitopes are displayed on the surface of circulating immune cells and are where T cells bind antigens to fuel the immune response. Multiple epitopes are produced from the same virus, tumor or other threat. Each epitope is targeted by a pool of T cells bearing different, but specific, T cell receptors to recognize and respond.

The tools included TCRdist, which researchers used to calculate the similarity and differences of key features of T cell receptors, such as amino acid sequences in important regions for antigen recognition. TCRdist allowed the scientists to identify T cell receptors that recognized the same epitope.

“These analytical tools helped us to understand the T cell repertoire against a particular antigen in a more coherent way than we have been able to do before. Grouping T cell receptors for a given epitope revealed underlying common features that characterized the bulk of the repertoire,” said first author Pradyot Dash, D.V.M., Ph.D., a staff scientist in Thomas’ laboratory.

Like the Rosetta Stone that scholars used to decode hieroglyphics, researchers trained the algorithm with more than 4,600 T cell receptors and then used it to correctly assign 81 percent of the human T cells and 78 percent of mouse T cells to one of 10 different viral epitopes. The “training data” were generated from 78 mice infected with influenza or the cytomegalovirus (CMV) and 32 humans infected with flu, CMV or the Epstein-Barr virus. The epitope of each T cell had been determined previously using a different, more labor-intensive method.

Researchers tested the algorithm on three flu-infected mice without knowledge of the epitope-receptor recognition. The algorithm was able to predict with up to 90 percent accuracy the flu epitopes recognized by these cells. “In fact, 85 percent of the T cell receptors classified correctly had not previously been identified,” Thomas said. “That demonstrates the power of this approach to classify novel antigen-specific T-cell receptors.”

Researchers also noticed that epitopes included clusters of T cell receptors that shared key similarities as well as less similar “outlier” receptors. Thomas speculated that as many as 10 percent of T cell receptors are outliers that help the immune system recognize and rapidly respond to mutations that might otherwise help virus-infected cells and other threats delay detection.

The project began in 2012 when co-author Tomer Hertz, Ph.D., of Fred Hutchinson and Ben-Gurion University of the Negev in Israel, was visiting Thomas’ laboratory. “We were looking at the amino acid sequences of T cell receptors when Tomer asked what the corresponding epitope was for a particular receptor,” Thomas said. “If you look at receptors long enough, you recognize patterns in the amino acids. By then we had looked at a lot of receptors and quickly identified it as an influenza PB1 epitope-specific receptor.

“At the time, there were no good computational tools to analyze this data. Tomer mentioned that we could teach computers to recognize the same patterns that we did and use the information to understand the rules that govern T cell recognition,” Thomas said. “That launched the collaboration.”