Researchers create framework for evaluating how fast a cancer will grow 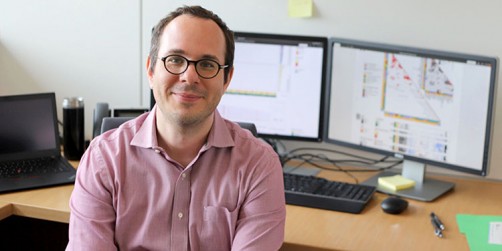 Paul Boutros, PhD,professor of urology and human genetics at the David Geffen School of Medicine at UCLA and director of cancer data science at the UCLA Jonsson Comprehensive Cancer Center.

Newswise — Cancer is a disease of evolution: cancer cells continually grow and change, and new mutations allow them to spread, even as treatments have continued to improve. Because of these constant changes, it has been notoriously difficult to fully understand the process of cancer evolution.

Now, an international team of researchers led by UCLA’s Paul Boutros, have created a new way to accurately estimate how fast an individual cancer is evolving using open-source software, which makes big data sets easily accessible to the public. A paper detailing their method is published in the journal of Nature Biotechnology.

The approach, which relies on DNA sequencing and crowdsourcing, can now be used to develop a series of new tools and biomarkers for any type of cancer, and could help improve patient outcomes. In addition to scientists from UCLA, the team comprises of researchers from the University of Toronto, the Francis Crick Institute in London and OHSU Knight Cancer Institute.

Boutros, a professor of urology and human genetics at the David Geffen School of Medicine at UCLA and director of cancer data science at the UCLA Jonsson Comprehensive Cancer Center, discusses the significance of the findings.

What was the main focus of your study?

Our question was simple: how could a cancer’s evolutionary history be accurately estimated using DNA sequencing of patient samples? Each sample is just a single snapshot in time, so we wanted to figure out what was going on before that snapshot was taken. Solving that problem would allow us to estimate how an individual’s cancer is evolving, which would tell us both where the cancer is now, but also where it is going. That could potentially allow us to create highly targeted “evolutionarily aware” treatments.

What are the new standards tools that were created in the study?

We standardized three major types of tools.  First, we created a computing standard for evolutionary analyses, including a cloud-based method for executing to standard data formats.  Second, we created a new way of evaluating the accuracy of cancer genome analyses by fully simulating them on high-performance computers. Third, and most difficult, we figured out new mathematical ways of comparing predicted and real evolutionary histories — starting a chapter in the science of cancer phylogenetic mathematics.

Why was it important to build a multi-national team for this study?

Understanding cancer evolution is a remarkably difficult problem.  It has mathematical, statistical, biological, clinical and experimental angles to it, and you need world-experts in each of those areas.  And it’s far more important to have the right people on the team than to have them in the same city. As an international team we have been having weekly hour-long video conferences for almost five years now, learning how to work together to solve the problems of cancer evolution.

How accurately can you estimate how fast a cancer is growing and changing and evolving?

From a single sample of a patient’s tumor, we can estimate many features of cancer evolution with 80% to 90% accuracy. Some parts of our estimation are more accurate than others, and we can now quantify which parts are more likely to be incorrect. The more samples of a tumor we have – for example, from different times during a patient’s treatment – the more accurately we can make estimations.

Can you give an example how this might work?

This type of evolutionary information could be informative for any cancer type, but let's consider one example. In prostate cancer, many patients are diagnosed with a tumor that is relatively slow-growing and is unlikely to be lethal. However, today clinicians struggle to accurately distinguish slow- from fast-growing tumors.  If a tumor is larger in size, is that because it is a slow-growing tumor that was not diagnosed right away (and had a long time to grow), or is that because it is a fast-growing tumor? Because of the difficulties in answering these questions, many patients with low-risk tumors are over-treated and suffer unnecessary personal and financial costs from it. By contrast some other patients are under-treated, and end up having metastatic disease that might have been better-managed. By accurately estimating evolutionary information at initial diagnosis, we can more accurately distinguish these two scenarios. Biomarkers that do exactly this are now in active and rapid development here at UCLA through the Institute of Urologic Oncology.

How will the study results affect your field?

These results will transform the way evolutionary analyses are done in cancer research. They provide a new standard for researchers around the world, and give very specific tools to the computational biologists developing new and improved algorithms. More broadly, this is the type of study that ultimately underpins key biological discoveries, giving us the tools to accurately, cheaply and quickly discover cancer's vulnerabilities.

What is the next stage of research?

Now that we know how to measure the accuracy of tumor evolution  — we have used crowd-sourcing to compare every method available in the world today  —  we are working to help researchers globally figure out where their current techniques can be improved, and what features make individual cancers most difficult to accurately understand.

Boutros is also the associate director of cancer informatics at the UCLA Institute for Precision Health and a member of Eli and Edythe Broad Center of Regenerative Medicine and Stem Cell Research.