A University of Wyoming researcher is part of a team that has demonstrated geologically how North America was once connected to Asia. Geologist Kevin Chamberlain and other researchers used a technique to test reconstructions of ancient continents to show how rocks or crust now exposed in southern Siberia were once connected to northern North America. Chamberlain says the finding offers future economic implications for mining companies. 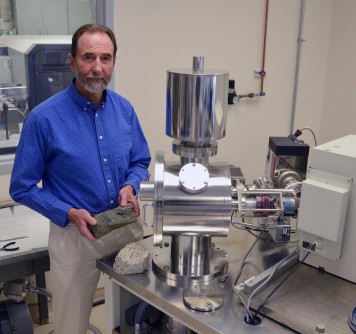 Kevin Chamberlain, a research professor in the UW Department of Geology and Geophysics, is co-author of a paper that appears online in Nature Geoscience today (April 11). The paper highlights a technique that he helped develop to test pre-Pangea continental reconstructions. Here, Chamberlain poses with a mass spectrometer and holds a piece of a mafic dike, or black rock, which cuts through white, or granitic, rock (also pictured) that represents continental crust.

Newswise — A University of Wyoming researcher contributed to a paper that has apparently solved an age-old riddle of how constituent continents were arranged in two Precambrian supercontinents -- then known as Nuna-Columbia and Rodinia. It's a finding that may have future economic implications for mining companies.

Specifically, the article describes a technique Kevin Chamberlain, a UW research professor in the Department of Geology and Geophysics, and other researchers used to test reconstructions of ancient continents. The paper argues that the rocks or crust now exposed in southern Siberia were once connected to northern North America for nearly a quarter of the Earth's history. Those two continental blocks now form the cores of the modern continents of Asia and North America.

Chamberlain was co-author of the paper, titled "Long-Lived Connection between Southern Siberia and Northern Laurentia in the Proterozoic," that appeared in today's (April 11) online issue of Nature Geoscience. The monthly multi-disciplinary journal focuses on bringing together top-quality research across the entire spectrum of the Earth sciences, along with relevant work in related areas. The journal's content reflects all the disciplines within the geosciences, encompassing field work, modeling and theoretical studies.

"The article highlights a technique that our project has been using to test pre-Pangea or ancient continental reconstructions," Chamberlain says. "We have been using the ages, orientations and paleo-magnetic characteristics of short-lived (1 million to 10 million years in duration) igneous, mafic dike swarms as piercing points to determine nearest-neighbor continents in the past."

Mafic dikes are dark-colored rocks or minerals that are in a dike formation, which is a sheet of rock that formed in a fracture in a pre-existing rock body. Chamberlain says mafic dikes, like those studied in the paper, can be found in Wyoming. Mafic dikes in the state include the black vein that can be seen in Mount Moran in the Teton Range; the black, horizontal band on the east face of Medicine Bow Peak; and those that crisscross the Granitic Mountains in central Wyoming.

Using labs at UW and UCLA, Chamberlain says his role in the project was to determine the magmatic ages of numerous mafic dikes through uranium-lead radiometric dating. He was one of four geochronology labs on the team and the only one based in the United States.

The linear dikes from these igneous events (large igneous provinces, or LIPs) are relatively narrow, roughly 100 meters or less, but can be 1,000 to 1,500 kilometers in length. They erupt in a radial pattern.

During later rifting, the continents broke into fragments, which later combined into subsequent new continents, such as our modern-day seven continents.

"There may have been four or five cycles of supercontinent formation," Chamberlain says.

Each continental fragment preserves a dike swarm record, he explains. By comparing the temporal records called bar codes (since a plot of dike date vs. time looks like a bar code) of older fragments known as cratons (the cores of modern continents), Chamberlain says he was able to test whether the cratons were close enough to share LIP dike swarms. He adds the research team also can determine when the two cratons joined, as well as when they split apart.

"In this new study, we believe that northern Laurentia (North America) and southern Siberia were joined for nearly 1.2 billion years from 1.9 billion years ago to 700 million years ago," he says. "Geologists are like detectives. It seems like we come to the crime scene after the fact and put together the pieces."

This finding disproves previous constructions of Nuna-Columbia and Rodinia, and establishes new arrangements of the continental blocks within them, he says.

The project determined the ages of nearly 250 mafic dikes worldwide, a number Chamberlain says is large enough to build a database comparison between all of the older continental fragments from roughly 500 million years ago to 2,700 million years ago. The research group also worked on more recent LIPs -- about 400 million to 100 million years ago -- which have importance for oil and gas exploration, and hydrocarbon maturation models.

A consortium of mining companies funded the research project for five years. Their reasoning: That the continental reconstructions for times when major, known metal deposits formed would be useful for prospecting new finds on the conjugate continents, Chamberlain says. These new deposits may be buried under hundreds of meters of younger rock. So, by establishing which continents were next to the known deposits when they formed, the hope is that additional minerals may be found in the future.

"A lot of the major metal deposits in the earth formed in the early part of Earth's history," Chamberlain says.

A print version of the paper is scheduled to appear in the May issue of Nature Geoscience.