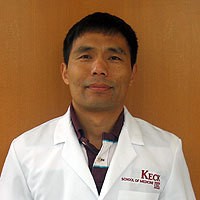 Qi-Long Ying, Ph.D., assistant professor of Cell and Neurobiology at the Keck School of Medicine of USC, researcher at the Eli and Edythe Broad Center for Regenerative Medicine and Stem Cell Research at USC

Newswise — Researchers at the University of Southern California (USC) have, for the first time in history, derived authentic embryonic stem (ES) cells from rats. This breakthrough finding will enable scientists to create far more effective animal models for the study of a range of human diseases.

The research will be published in the Dec. 26 issue of the journal Cell.

"This is a major development in stem cell research because we know that rats are much more closely related to humans than mice in many aspects of biology. The research direction of many labs around the world will change because of the availability of rat ES cells," says Qi-Long Ying, Ph.D., assistant professor of Cell and Neurobiology at the Keck School of Medicine of USC, researcher at the Eli and Edythe Broad Center for Regenerative Medicine and Stem Cell Research at USC, and the study's principal investigator.

The finding brings scientists much closer to creating "knockout" rats—animals that are genetically modified to lack one or more genes—for biomedical research. By observing what happens to animals when specific genes are removed, researchers can identify the function of the gene and whether it is linked to a specific disease.

"Without ES cells it is impossible to perform precise genetic modifications for the creation of the disease model we want," he says. "The availability of rat ES cells will greatly facilitate the creation of rat models for the study of different human diseases, such as cancer, diabetes, high blood pressure, addiction and autoimmune diseases."

Ying, a native of China, notes that this breakthrough research occurred during 2008, the Chinese year of the rat.

Embryonic stem cells are derived from a group of cells called the inner cell mass in a very early stage embryo. ES cells provide researchers with a valuable tool to address fundamental biological questions, because they enable scientists to study how genes function, and to develop animals with conditions that mimic important human diseases.

The first ES cell lines were established from mice in 1981 by Martin Evans of Cardiff University, UK, who was last year awarded the Nobel Prize in Medicine or Physiology. Researchers have long been working on establishing rat ES cells, but faced technical hurdles because the conventional methods developed for the derivation of mouse cells did not work in rats.

Building on recent research into how ES cells are maintained, the USC researchers found that rat ES cells can be efficiently derived and grown in the presence of the "3i medium," which consists of molecules that inhibit three specific gene signaling components (GSK3, MEK and FGF receptor kinase). This approach insulates the stem cell from signals that would normally cause it to differentiate, or turn into specialized types of body cells. By blocking these signals, Ying and colleagues found that stem cells from rats, which have previously failed to propagate at all, could be grown indefinitely in the laboratory in the primitive embryonic state.

An accompanying study led by researchers at the University of Cambridge, U.K., reported similar findings, independently verifying that authentic ES cells can be established from rats. Both papers will be published in the upcoming issue of Cell.

"The development of rat embryonic stem cells, long sought by researchers around the world, is a major advance in biomedical science," says Martin Pera, Ph.D., director of the Eli and Edythe Broad Center for Regenerative Medicine and Stem Cell Research at USC. "These new stem cell lines will make a huge contribution to basic and applied research and drug development, by providing a technology platform for facile genetic manipulation of a mammalian species that is widely used in academic and industrial labs studying physiology, pathology and pharmacology."

Until now, authentic ES cells have never been established from humans or animals other than mice. This new key understanding into how ES cells are maintained in culture may eventually enable scientists to establish real ES cell lines from a number of other mammals, which could have significant implications for organ transplantations and the development of drug therapies, Ying says. Researchers at USC are currently working on generating the first gene knockout rat through ES cell-based technologies.

"If our work is feasible it is likely that many labs will follow up to generate different types of gene knockout rat models," he says. "This will have a major impact on the future of biomedical research."