Researchers Determine Why Robots Get Stuck in the Sand

This video shows that by optimizing the rotational motion of the robotâ€™s limbs, SandBot is able to walk quickly across the granular media. 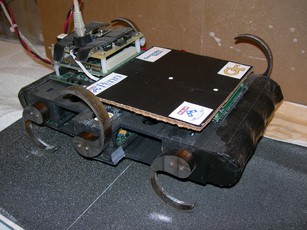 In this trackway filled with poppy seeds, Georgia Tech researchers conducted controlled experiments to study why robots have difficulty traversing sand and other granular media like dirt, rubble or slippery piles of leaves. 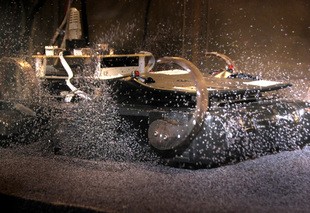 By studying the physics of movement on granular media, Georgia Tech researchers revealed that robots attempting to move across sandy terrain should move their legs more slowly, especially if the sand is loosely packed.

Newswise — Today's advanced mobile robots explore complex terrains across the globe and even on Mars, but have difficulty traversing sand and other granular media like dirt, rubble or slippery piles of leaves.

A new study published February 10 in the journal Proceedings of the National Academy of Sciences takes what may be the first detailed look at the problem of robot locomotion on granular surfaces. Among the study's recommendations: robots attempting to move across sandy terrain should move their legs more slowly, especially if the sand is loosely packed.

"We have discovered that when a robot rotates its legs too fast or the sand is packed loosely enough, the robot transitions from a rapid walking motion to a much slower swimming motion," said Daniel Goldman, an assistant professor in the School of Physics at the Georgia Institute of Technology. This project was funded by the Burroughs Wellcome Fund and the U.S. Army Research Laboratory.

The physics of movement on granular media has been largely unexplored systematically, so Goldman and his team set out to systematically investigate the performance of a small six-legged device called SandBot. The robot was designed by Haldun Komsuoglu and Daniel Koditschek at the University of Pennsylvania.

"This is new territory because researchers have not examined the interaction between an animal's foot and sand like they have a whale or duck's flipper and water," said Goldman. "Sand is a uniquely challenging terrain because it can shift quite easily from solid to fluid to solid and requires different locomotion strategies."

To conduct controlled experiments, Georgia Tech physics graduate student Chen Li built a trackway for SandBot to run along. The trackway consists of an eight-foot-long poppy seed-filled container with tiny holes in the bottom through which air can be blown. The air pulses elevate the granules and cause them to settle into a loosely packed solid state, allowing the researchers to closely control the density of the material.

"We used poppy seeds as the granular material because they were large enough not to get into the SandBot motors but light enough to be manipulated with our air blowers," explained Goldman. "We have done experiments with small glass beads, which more closely approximate desert sand, and found no qualitative change in the results."

In the desert, typical volume fractions for granular media range from 55 to 64 percent. For the study's initial experiments, the researchers packed the poppy seeds to a volume fraction of 63 percent, placed SandBot onto the surface and set its c-shaped legs to rotate five times per second. The little robot, which could bounce quickly across hard ground, became completely stuck in the granular material after just a few steps.

The researchers discovered that the problem was the rotational motion of the robot's limbs. The SandBot moves its limbs in an alternating tripod gait and during a rotation, each limb moves fast while it is in the air and slow while it is in the ground. The researchers found that the robot could walk across the sand quickly " at a speed of one body length per second " if the rotation frequency was fixed and three parameters were adjusted: the durations of the slow and fast phases and the angle at which the limb changed from slow to fast.

"A systematic study of the motion then revealed that changes in volume fraction of less than one percent resulted in either rapid motion or slower swimming," added Goldman. "We saw similar sensitivity when we changed the limb rotation frequency." To study this phenomenon further, Goldman and Paul Umbanhowar of Northwestern University developed a simple kinematic model of penetration and slip of a curved limb on granular media. The model results showed that the relationship of the speed to the volume fraction and frequency of leg rotation was largely controlled by the degree to which the robot limbs penetrated into the sand with each step. The higher the limb frequency and the looser the granular material, the deeper the robot sank into the granular material. Thus the length of the step the robot could take was shortened and when the step size became too short, the robot took its next step into ground disturbed by the previous step. This triggered a catastrophic loss of speed and a shift from walking to continuous paddling through the poppy seeds.

Goldman believes that this study's experiments and model describing the basic behavior of motion on granular media will help biologists understand how animals appear to move effortlessly across a diversity of complex substrates.

He also plans to use the information to help roboticists design devices with the appropriate feet and limb motion to move well in complex terrain " including sand. Future robots may have the ability to sense the type of material they are walking across, allowing them to adjust their limb motion accordingly. Such smart robots would advance the exploration of other planets, as well as search-and-rescue missions in disaster settings.

This material is based on research sponsored by the Army Research Laboratory and was accomplished under Cooperative Agreement Number W911NF-08-2-0004. The views and conclusions contained in this document are those of the authors and should not be interpreted as representing the official policies, either expressed or implied, of the Army Research Laboratory or U.S. Government.