University of Maryland mathematicians provide a mathematical explanation for a previously uncertain law of physics, revealing when the law applies and when it doesn't 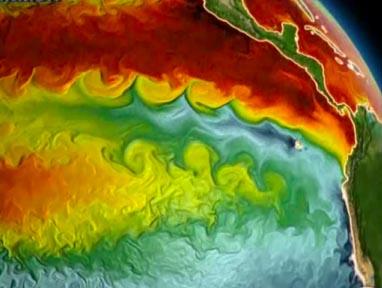 Mathematicians from UMD have developed the first rigorous proof for a fundamental law of turbulence. Batchelor's law, which helps explain how chemical concentrations and temperature variations distribute themselves in a fluid, can be seen at work in the variously sized swirls of mixing warm and cold ocean water.

Newswise — What if engineers could design a better jet with mathematical equations that drastically reduce the need for experimental testing? Or what if weather prediction models could predict details in the movement of heat from the ocean into a hurricane? These things are impossible now, but could be possible in the future with a more complete mathematical understanding of the laws of turbulence.

University of Maryland mathematicians Jacob Bedrossian, Samuel Punshon-Smith and Alex Blumenthal have developed the first rigorous mathematical proof explaining a fundamental law of turbulence. The proof of Batchelor's law will be presented at a meeting of the Society for Industrial and Applied Mathematics on December 12, 2019.

Although all laws of physics can be described using mathematical equations, many are not supported by detailed mathematical proofs that explain their underlying principles. One area of physics that has been considered too challenging to explain with rigorous mathematics is turbulence. Seen in ocean surf, billowing clouds and the wake behind a speeding vehicle, turbulence is the chaotic movement of fluids (including air and water) that includes seemingly random changes in pressure and velocity.

Turbulence is the reason the Navier-Stokes equations, which describe how fluids flow, are so hard to solve that there is a million-dollar reward for anyone who can prove them mathematically. To understand fluid flow, scientists must first understand turbulence.

"It should be possible to look at a physical system and understand mathematically if a given physical law is true," said Jacob Bedrossian, a professor of mathematics at UMD and a co-author of the proof. "We believe our proof provides the foundation for understanding why Batchelor's law, a key law of turbulence, is true in a way that no theoretical physics work has done so far. This work could help clarify some of the variations seen in turbulence experiments and predict the settings where Batchelor's law applies as well as where it doesn't."

Since its introduction in 1959, physicists have debated the validity and scope of Batchelor's law, which helps explain how chemical concentrations and temperature variations distribute themselves in a fluid. For example, stirring cream into coffee creates a large swirl with small swirls branching off of it and even smaller ones branching off of those. As the cream mixes, the swirls grow smaller and the level of detail changes at each scale. Batchelor's law predicts the detail of those swirls at different scales.

The law plays a role in such things as chemicals mixing in a solution, river water blending with saltwater as it flows into the ocean and warm Gulfstream water combining with cooler water as it flows north. Over the years, many important contributions have been made to help understand this law, including work at UMD by Distinguished University Professors Thomas Antonsen and Edward Ott. However, a complete mathematical proof of Batchelor's law has remained elusive.

"Before the work of Professor Bedrossian and his co-authors, Batchelor's law was a conjecture," said Vladimir Sverak, a professor of mathematics at the University of Minnesota who was not involved in the work. "The conjecture was supported by some data from experiments, and one could speculate as to why such a law should hold. A mathematical proof of the law can be considered as an ideal consistency check. It also gives us a better understanding of what is really going on in the fluid, and this may lead to further progress."

"We weren't sure if this could be done," said Bedrossian, who also has a joint appointment in UMD's Center for Scientific Computation and Mathematical Modeling. "The universal laws of turbulence were thought to be too complex to address mathematically. But we were able to crack the problem by combining expertise from multiple fields."

An expert in partial differential equations, Bedrossian brought in two UMD postdoctoral researchers who are experts in three other areas to help him solve the problem. Samuel Punshon-Smith (Ph.D. '17, applied mathematics and statistics, and scientific computation), now the Prager Assistant Professor at Brown University, is an expert in probability. Alex Blumenthal is an expert in dynamical systems and ergodic theory, a branch of mathematics that includes what is commonly known as chaos theory. The team represented four distinct areas of mathematical expertise that rarely interact to this degree. All were essential to solving the problem.

"The way the problem has been approached is indeed creative and innovative," Sverak said. "Sometimes the method of proof can be even more important than the proof itself. It is likely that ideas from the papers by Professor Bedrossian and his co-authors will be very useful in future research."

The new level of collaboration that the team brought to this issue sets the stage for developing mathematical proofs to explain other unproven laws of turbulence.

"If this proof is all we achieve, I think we've accomplished something," Bedrossian said. "But I'm hopeful that this is a warmup and that this opens a door to saying 'Yes, we can prove universality laws of turbulence and they are not beyond the realm of mathematics.' Now that we are equipped with a much clearer understanding of how to use mathematics to study these questions, we are working to build the mathematical tools required to study more of these laws."

Understanding the underlying physical principles behind more laws of turbulence could eventually help engineers and physicists in designing better vehicles, wind turbines and similar technologies or in making better weather and climate predictions.

The proof of Batchelor's law comprises four papers presented in scientific talks at the Society for Industrial and Applied Mathematics Conference on Analysis of Partial Differential Equations (PD19) on December 12, 2019. The papers are: Almost-sure exponential mixing of passive scalars by the stochastic Navier-Stokes equations and Almost-sure enhanced dissipation and uniform-in-diffusivity exponential mixing for advection-diffusion by stochastic Navier-Stokes, presented by Jacob Bedrossian; Lagrangian chaos and scalar advection in stochastic fluid mechanics, presented by Alex Blumenthal; and The Batchelor spectrum of passive scalar turbulence in stochastic fluid mechanics, presented by Samuel Punshon-Smith.

This work was supported by the National Science Foundation (Award Nos. DMS-1552826, DMS-1604805 and DMS-1803481). The content of this article does not necessarily reflect the views of this organization.

The College of Computer, Mathematical, and Natural Sciences at the University of Maryland educates more than 9,000 future scientific leaders in its undergraduate and graduate programs each year. The college's 10 departments and more than a dozen interdisciplinary research centers foster scientific discovery with annual sponsored research funding exceeding $175 million.