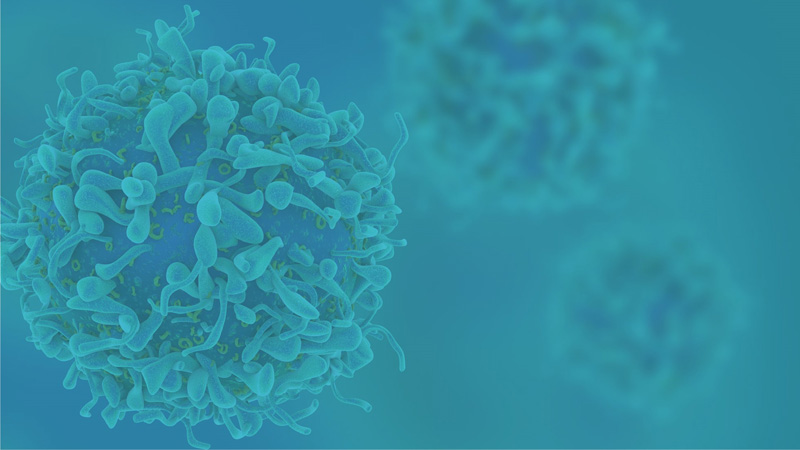 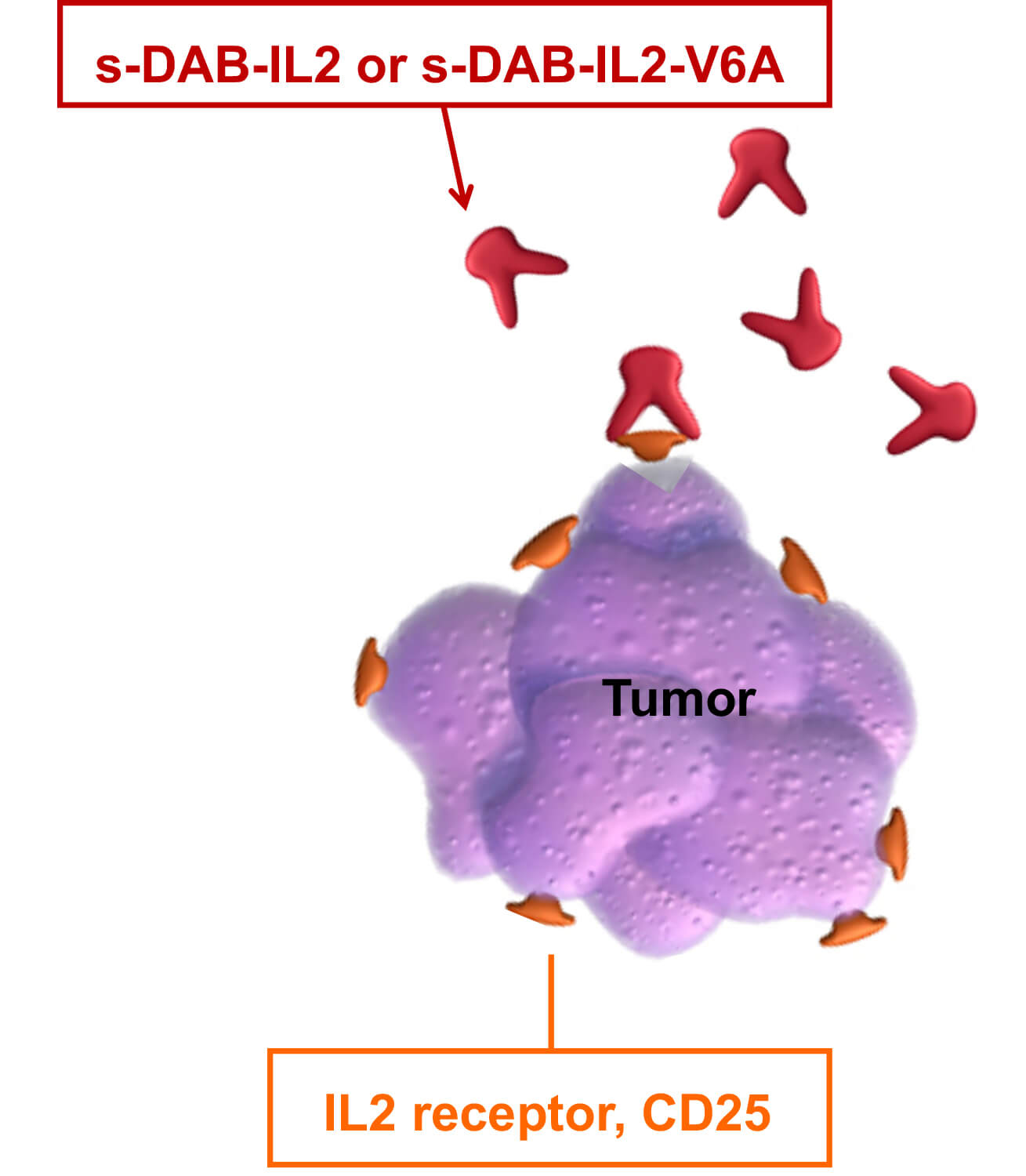 Many T cell lymphomas have a high density of the IL2 receptor (CD25). The targeted toxin therapies bind to the IL2 receptor, and then the diphtheria toxin portion of the molecule delivers a lethal enzyme to the targeted cell which results in cell death within hours 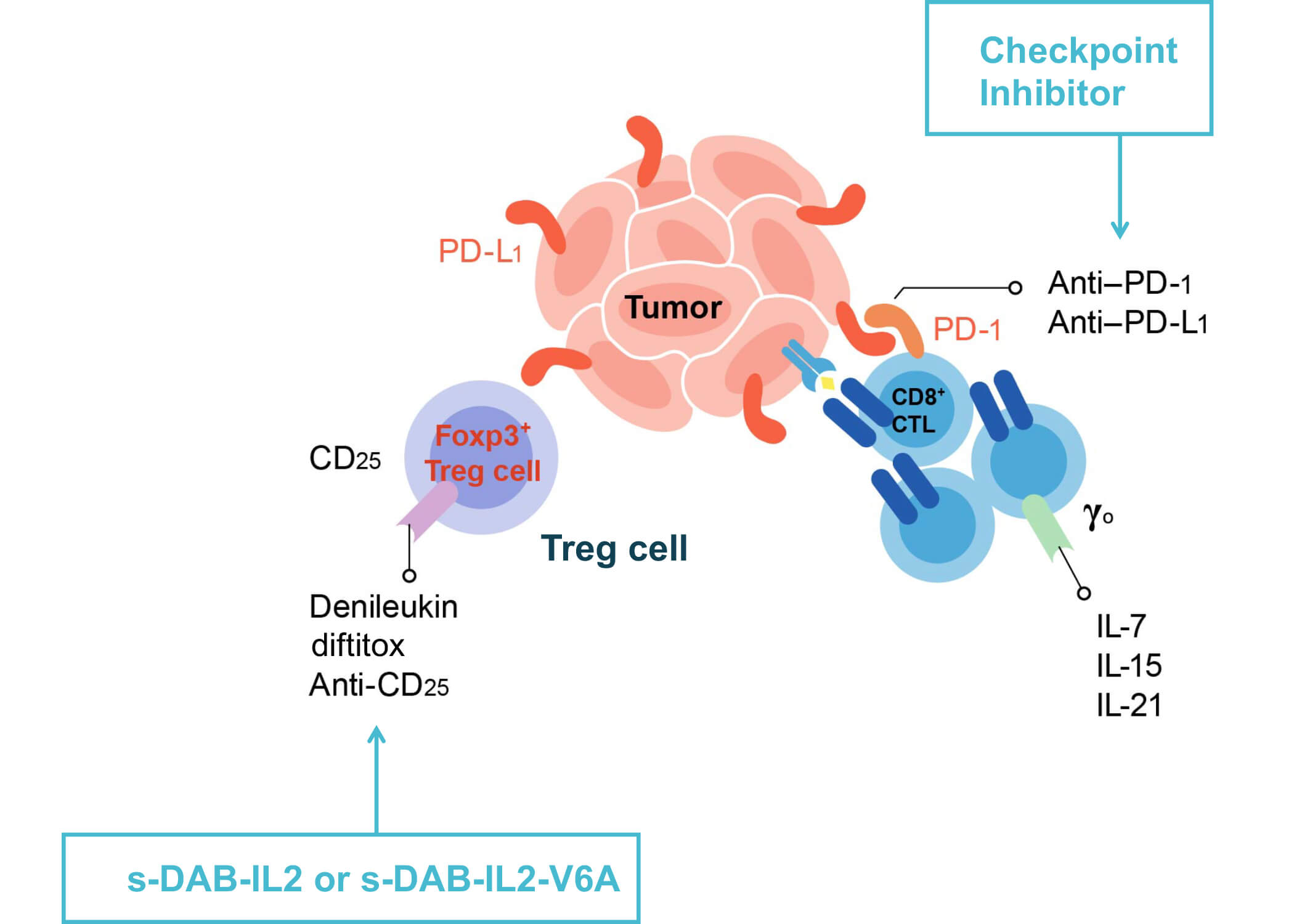 In a mouse model of melanoma, the two agents, when given together, depleted so-called T regulatory cells that infiltrate tumors and hinder the immune system’s ability to fight cancer, according to the researchers, whose published report on the experiments appears in the February issue of Proceedings of the National Academy of Sciences.

The investigators said each of the compounds individually depleted the regulatory cells in the mice, but increased the depletion rate when used before an immunotherapy treatment known as checkpoint blockade, providing a one-two punch against cancer.

“Our study demonstrates that these proteins show good potential as an immunotherapy option,” says senior study author William Bishai, M.D., Ph.D., professor of medicine. “When paired with checkpoint inhibitor therapy, they allow the immune system to develop a much more robust, one-two punch, anti-tumor response leading to an almost complete knockout of tumor.”

Bishai says more animal research, along with safety and effectiveness studies in humans, must be done before the proteins can be prescribed for people with melanoma, a skin cancer that although relatively rare, kills about 7,300 Americans each year.

The novel proteins used in the mouse experiments are re-engineered forms of denileukin diftitox (DAB-IL-2), a diphtheria toxin-based fusion protein that was approved by the U.S. Food and Drug Administration in 1999 and marketed under the name Ontak for the treatment of persistent or recurrent cutaneous T-cell lymphoma, a cancer of the immune system. Ontak was prescribed for 11 years for other conditions as well, including peripheral T-cell lymphoma, graft versus host disease and psoriasis. Then, in 2011, the FDA put the drug on clinical hold, in part because up to 25 percent of patients who received it developed vascular leak syndrome, a condition marked by fluid retention, or lung or heart failure.

Ontak was developed by study co-author John “Jack” Murphy, Ph.D., professor of medicine at Johns Hopkins, when he worked at Harvard Medical School. Bishai was one of his graduate students in the 1980s.

DAB-IL-2 sprouted from an interest in diphtheria toxin, which was long recognized as a potent biological poison, Murphy says. He worked for years to engineer a form of the toxin that would attach only to cells that had specific receptors they wanted to target.

One study Murphy and Bishai worked on, published in 1986, targeted the biologic activity of diphtheria toxin specifically to melanoma cells.

“That was the first indication that we could deliberately change the target cell specificity of DT from a generalized poison to a poison that would only go to cells we wanted to eliminate,” says Murphy.

At the time it was put on hold, DAB-IL-2 was considered a potential immunotherapy to deplete T regulatory cells in patients with advanced, malignant melanoma that could no longer be treated with surgery. Phase 2 clinical studies demonstrated it was at least as effective in stopping tumor progression or possibly more effective than checkpoint inhibitors alone, Murphy says.

Murphy came to Johns Hopkins in 2015 to work with Bishai again, with the mentor choosing to work with the mentee, and in a bid to solve the vascular leakage and other toxicity problems associated with DAB-IL-2, they partnered with Drew Pardoll, M.D., Ph.D., director of the Bloomberg~Kimmel Institute for Cancer Immunotherapy.

“The current study demonstrates what we believe is the continuing potential of this agent as a molecule able to re-establish the balance of the immune system in the treatment of solid tumors such as melanoma,” says Murphy. In their paper, Bishai, Murphy, Pardoll and colleagues describe their production of two second-generation forms of the engineered toxins, DAB-IL-2: s-DAB-IL-2 and s-DAB-IL-2(V6A). The V6A form substitutes an amino acid associated with vascular leak syndrome, resulting in a 50-fold reduction of the syndrome in test tube studies.

For the mouse experiments, the team first injected the animals with either regular s-DAB-IL-2 or the V6A form seven and 10 days after being injected with tumor cells.

Both drugs depleted T regulatory cells in the lymph nodes by 50 percent and inhibited tumor growth by 75 percent when evaluated 24 days after the first tumor cell injection. Then, they tried using these proteins followed by an anti-PD-1 checkpoint inhibitor. Mice with melanoma tumors were treated 10 days after tumor initiation with either a control drug, the checkpoint inhibitor, s-DAB-IL-2 or s-DAB-IL-2(V6A) as solo therapies.

In additional studies, the team has created an alternate form of the protein that removes IL-2 and substitutes other targeting proteins. This compound has shown some promise in laboratory studies of breast cancer in mice, Bishai says.

Murphy, Pardoll and Bishai hold positions in Sonoval, LLC, which holds rights to develop s-DAB-IL-2(V6A). These relationships are being managed by The Johns Hopkins University in accordance with its conflict of interest policies.

Caption: Many T cell lymphomas have a high density of the IL2 receptor (CD25). The targeted toxin therapies bind to the IL2 receptor, and then the diphtheria toxin portion of the molecule delivers a lethal enzyme to the targeted cell which results in cell death within hours