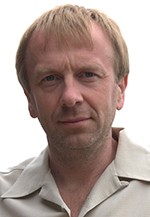 Peter Kuhn, PhD, is an associate professor at The Scripps Research Institute.

Newswise — LA JOLLA, CA – A new “fluid biopsy” technique that could identify patients at high risk of a heart attack by identifying specific cells as markers in the bloodstream has been developed by a group of researchers at The Scripps Research Institute (TSRI).

The technique, which is described in the latest edition of IOP Publishing’s journal Physical Biology, works by identifying circulating endothelial cells (CECs) and has been successful in distinguishing patients undergoing treatment for a recent heart attack with a healthy control group.

The researchers believe the technique can now be tested on patients who exhibit symptoms but are yet to experience a heart attack. Currently, there is no predictive test for a heart attack—at least not of satisfying accuracy.

“The goal of this paper was to establish evidence that these circulating endothelial cells can be detected reliably in patients following a heart attack and do not exist in healthy controls—which we have achieved,” said TSRI Associate Professor Peter Kuhn, who led the study. “Our results were so significant relative to the healthy controls that the obvious next step is to assess the usefulness of the test in identifying patients during the early stages of a heart attack.”

Endothelial cells, which line the walls of the arteries, have been strongly linked to ongoing heart attacks when circulating in the bloodstream; they are thought to arrive there when diseased plaque builds up, ruptures and ulcerates, causing inflammation in the arteries. This damage can cause blood clots to form that prevent blood from flowing through the arteries and ultimately results in a heart attack.

As such, the researchers developed a procedure called the High-Definition Circulating Endothelial Cell (HD-CEC) assay to detect and characterise CECs in the blood samples of 79 patients who had experienced a heart attack at the time of sampling.

For comparison, they also used the assay on two control groups, which consisted of 25 healthy patients and seven patients undergoing treatment for vascular disease.

The assay was able to identify CECs by their morphological features and their reactions with specific antibodies. The cells were shown to be significantly elevated in the heart attack patients compared to the healthy controls and were detected with high sensitivity and high specificity.

The researchers also compared their results with a commercially available test, called CellSearch®, which has previously been approved by the U.S. Food and Drug Administration (FDA) to enumerate circulating tumour cells in cancer patients.

The HD-CEC test showed a higher specificity for CECs compared to CellSearch® because it used a direct analysis method and was free of bias from an enrichment stage. “Our assay effectively analyzes millions of cells, which is more work but guarantees that you are analysing all of the potential cells,” said Kuhn.

The first authors of the paper, “Fluid phase biopsy for detection and characterization of circulating endothelial cells in myocardial infarction,” are Kelly Bethel of Scripps Clinic and Madelyn S Luttgen of TSRI. In addition to Kuhn, Bethel and Luttgen, authors include Samir Damani and Sarah Topol of TSRI and Scripps Translational Science Institute; Anand Kolatkar, Rachelle Lamy and Mohsen Sabouri-Ghomi of TSRI; and Eric J Topol of Scripps Clinic, TSRI and Scripps Translational Science Institute. After January 10, this paper can be downloaded from http://iopscience.iop.org/1478-3975/11/1/016002/article.