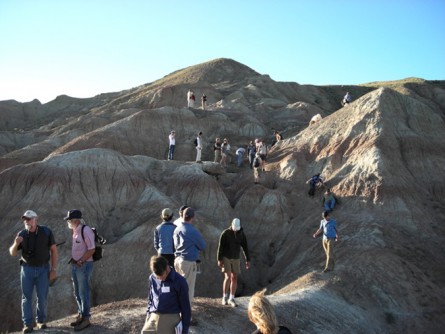 Geologists associated with the UNH-led research project that will drill sediment cores to investigate past global warming events on a field trip during a planning workshop in the Bighorn Basin, Wyoming. 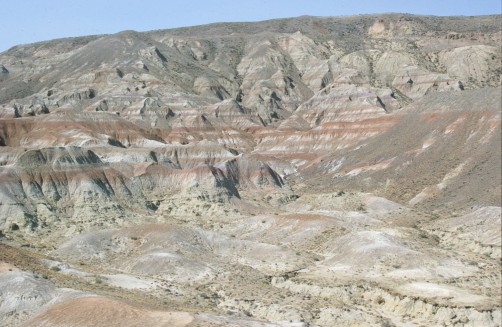 Geological deposits in the Bighorn Basin of Wyoming that will be cored to investigate past global warming events.

Newswise — DURHAM, N.H. -- About 55 million years ago, the Earth burped up a massive release of carbon dioxide into the atmosphere – an amount equivalent to burning all the petroleum and other fossil fuels that exist today. “And we don’t know where it came from,” says University of New Hampshire’s Will Clyde, associate professor of geology. “This is a big part of the carbon cycle that affected the climate system, and we don’t understand it.”

This month, Clyde is leading a pioneering National Science Foundation-funded geological study in the Bighorn Basin of Wyoming to search for clues to this event, which occurred during a period of extreme warming called the Paleocene-Eocene Thermal Maximum (PETM). A team of 27 scientists from 11 institutions will drill a series of cores into the basin’s stratified layers of rocks that they hope will yield better understanding of this mystery and – perhaps – of current and future global climate change.

This field work, in an area just east of Yellowstone National Park near Cody, Wyo., will be the first time scientists have drilled continental cores in an attempt to better understand this release of carbon and the warming, an environmental anomaly called a hyperthermal event, that surrounded it. Previous research has utilized ocean cores or more weathered rock outcroppings.

The sedimentary deposits in the semi-arid, 100-mile-wide Bighorn Basin created ideal conditions for studying the PETM. Drilling two-and-a-half-inch diameter cores about 150 meters into the sediment, says Clyde, will advance research by providing pristine sediments on which scientists can do more precise geocehmical analyses.

“It will help us better understand the long-term carbon cycle of the Earth,” says Clyde, who chairs the Earth sciences department in UNH’s College of Engineering and Physical Sciences (CEPS). It’s not just ancient history Clyde and his colleagues are interested in. Researchers suspect that the carbon release may have been a result of an initial rise in temperature during the PETM and they wonder whether current warming, due to global climate change, could launch a similar event. Further, the PETM provides insights into the carbon cycle, climate system, and how living organisms respond to environmental change.

“Could our dependence on carbon-based energy sources trigger one or more causes of prehistoric global warming and, as a result, make our struggle with a warming earth far worse than currently predicted? ” asks Clyde.

Between July 13 and Aug. 11, 2011, the scientists will drill pairs of cores at three sites – Polecat Bench, Gilmore Hill, and Basin Substation – around the Bighorn Basin. In partnership with a professional drilling team, scientists will work around the clock for a week at each site; each core, says Clyde, could take three days to drill.

“The nature of these rocks makes them particularly hard to core,” he says, adding that because this type of scientific drilling has never been conducted on these kinds of deposits, the team will be pioneering some of this work.

Once collected, the cores will be shipped in refrigerated containers to the University of Bremen in Germany. Clyde and the team will visit that laboratory in January 2012 to continue studying the cores, measuring the isotopic signature of carbon residue in the rocks to determine the amount of carbon released into the atmosphere during hyperthermals.

Clyde is optimistic about the project’s ability to shed light on previous and potential global warming. “Hopefully, by looking at the past, we will better understand prospects for the long-term climate cycle that may or may not become our future.”

The research team is posting news and photos from the field on a Facebook page, . For more information on the project, go to http://earth.unh.edu/clyde/BBCP.shtml.

Photographs available to download: www.ceps.unh.edu/images/Dig1.jpg Caption: Geologists associated with the UNH-led research project that will drill sediment cores to investigate past global warming events on a field trip during a planning workshop in the Bighorn Basin, Wyoming. Credit: Thomas Westerhold

www.ceps.unh.edu/images/Dig2_original.jpg Caption: Geological deposits in the Bighorn Basin of Wyoming that will be cored to investigate past global warming events. Credit: Aaron Diefendorf 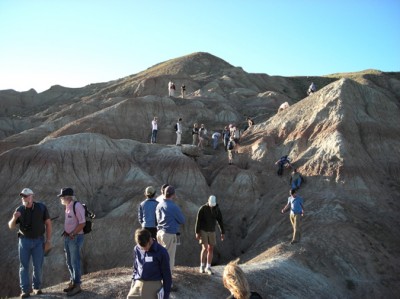 Caption: Geologists associated with the UNH-led research project that will drill sediment cores to investigate past global warming events on a field trip during a planning workshop in the Bighorn Basin, Wyoming. 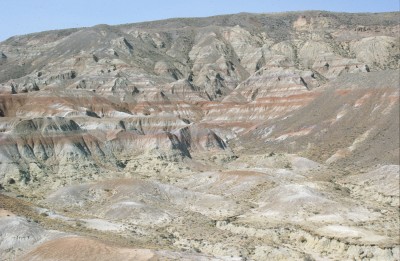 Caption: Geological deposits in the Bighorn Basin of Wyoming that will be cored to investigate past global warming events.