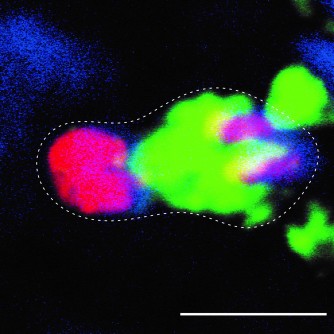 Asymmetric stem cell division in a planarian flatworm showing a smaller cell with DNA (labeled in red) and a larger cell with a stem cell marker (smedwi-1 RNA, labeled in green). Scale bar is 10 micrometers.

Newswise — Kansas City, MO. — Many living creatures possess exceptional abilities that set them apart from other species. Cheetahs can run up to 60 miles per hour; ants can lift 100 times their body weight; flatworms can regrow amputated body parts. Scientists have spent decades studying the mechanisms that drive such remarkable feats, with the hopes that any secrets they uncover might lead to new perspectives in human biology and new ways to enhance health and ameliorate disease.

Now, researchers at the Stowers Institute have identified a key molecule that directs stem cells in the planarian flatworm to make copies of themselves. The molecule, called EGFR-3, is part of a cascade of signals that seem to control the way these cells divide and differentiate in response to near-lethal levels of radiation.

The finding, which appears online August 11, 2016, in the journal Developmental Cell, has important implications for advancing regenerative medicine and for developing more effective cancer therapies.

“All the genes in this signaling cascade are conserved, from planaria on up to humans. A similar process could also be taking place within our very own cells, we just don’t know it,” says Alejandro Sánchez Alvarado, Ph.D., an investigator at the Stowers Institute and Howard Hughes Medical Institute, who is the senior author of the study. “In fact, anything that perturbs our body – aging, injury, even a spicy meal – can affect our stem cell functions. If we understand better how planarians regulate the population dynamics of their stem cells, it may provide a clue for addressing our own pathologies.”

Planarians are world-renowned for their regenerative properties. Split one down the middle, and two identical organisms will appear in its place. Cut a fragment 1/279th the size of the original animal and it will regenerate a complete animal. This ability originates in a special group of adult stem cells called neoblasts that are spread throughout the bodies of these freshwater worms. Several years ago, researchers tested the limits of these resilient creatures by subjecting them to near-lethal doses of radiation. They found that even if just a single neoblast remained, it was enough to replenish the entire population of planarian stem cells.

In this study, Sánchez Alvarado wanted to pinpoint the exact signals that shaped these dramatic population dynamics. Kai Lei, Ph.D., a postdoctoral scientist in his lab, decided to go after the usual suspects – namely, the EGF, FGF, Insulin, VEGF, TGF-beta, Wnt/beta-catenin, Hedgehog, and Notch signaling pathways - that have been associated with stem cells and thus might play a role in this process. First, Lei and colleagues used an advanced molecular technique called RNA interference to silence different genes in the suspected signaling pathways. Next, he subjected planaria to a dose of radiation that would kill most, but not all, of their resident neoblasts. Then, he waited to see how each silenced gene affected the ability of the neoblasts to recover, repopulate, and restore the survival of the irradiated animals.

The researchers discovered that the egfr-3 gene was required for neoblast repopulation. This gene codes for a protein that sits on the surface of cells and binds another protein - called epidermal growth factor – known to stimulate growth, proliferation, and differentiation in other cell types. When they confirmed their findings by using a fluorescent staining to illuminate the EGFR-3 protein on the neoblasts, they stumbled upon something curious. The proteins sat on the top of the cell, like the researchers had expected, but rather than being randomly distributed across the entire surface, they were clumped together on one side, like an unruly head of hair.

“Asymmetric cell division may be a way of getting rid of the bad apples. We don’t have proof yet, but we think that this signaling pathway helps to shuffle along the cells that carry defects, giving them different fates so they no longer make more stem cells (neoblasts). The prediction would be that only the cells with the best DNA get to stick around and serve as the template for future generations — something we need to test next,” said Sánchez Alvarado.

Like a magician, the freshwater flatworm known as planaria can survive decapitation or even being cut into many pieces. But the flatworm does not need to rely on trickery. Its remarkable ability to fully regenerate from tiny remnants of tissue is due to a special population of adult stem cells known as neoblasts. In an article in the journal Developmental Cell, Stowers Institute scientists explore the precise mechanisms shaping the population dynamics of neoblasts. Postdoctoral research associate Kai Lei, Ph.D., and his advisor Alejandro Sánchez Alvarado, Ph.D., have discovered that a molecule called EGFR-3 is necessary for neoblasts to regenerate, and might control the way these cells divide and differentiate in response to otherwise lethal doses of radiation. The finding has important implications for advancing regenerative medicine and for developing more effective cancer therapies.

The Stowers Institute for Medical Research is a non-profit, basic biomedical research organization dedicated to improving human health by studying the fundamental processes of life. Jim Stowers, founder of American Century Investments, and his wife, Virginia, opened the Institute in 2000. Currently, the Institute is home to about 500 researchers and support personnel, over 20 independent research programs, and more than a dozen technology development and core facilities. Learn more about the Institute at www.stowers.org and about its graduate program at http://www.stowers.org/gradschool.