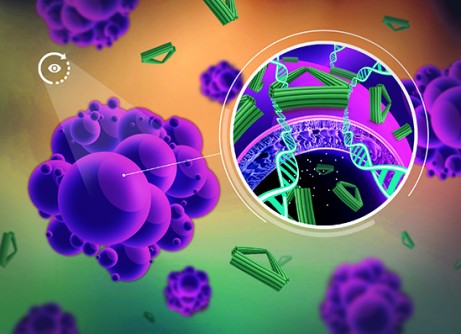 ROLLA, Mo. – A promising discovery for advanced cancer therapy reveals that the efficiency of drug delivery in DNA nanostructures depends on their shapes, say researchers at Missouri University of Science and Technology and the University of Kansas in a scientific paper published today (March 21, 2018).

“For the first time, a time-lapse live cell imaging system was used to observe the absorption and controlled release of the drug doxorubicin (DOX) in live breast cancer cells,” says Dr. Risheng Wang, assistant professor of chemistry at Missouri S&T.

Wang and her colleagues packed the drug into three different DNA “origami”—“the shapes we deliberately create by assembling strands of DNA molecules into target structures,” she says.

Wang is the lead investigator and author of the study, “Time-lapse live cell imaging to monitor doxorubicin release from DNA origami nanostructures,” published by the Royal Society of Chemistry in the March 21, 2018, Journal of Materials Chemistry B, and featured on the cover of this issue.

“Shapes matter,” says Wang. “The optimization of the shape and size of self-assembled DNA nanostructures loaded with anti-cancer drugs may allow them to carry a greater quantity of the drugs, rendering them more effective.”

Although DOX is one of the most effective and widely used cytotoxic drugs in chemotherapy, its current synthetic delivery modes present challenges, including drug resistance by cancer cells, lack of selective delivery to the right cells and adverse side effects, the authors write.

To overcome these challenges, new materials, such as self-assembled DNA, are being explored to improve DOX’s delivery and reduce side effects.

“We have developed a new cancer drug delivery carrier from non-toxic DNA nanostructures that predicts therapeutic improvements,” says Wang. “These self-assembled DNA nanostructures could serve as a ‘cloak of invisibility’ to sneak drugs into cancer cells without being detected and pumped out by cells that have already created drug resistance. Compared with synthetic materials for drug delivery, DNA nanostructures are biodegradable and biocompatible, and their size, shape and rigidity can be easily manipulated, which are the features nanocarriers need.”

“This study not only provides guidance for the design of efficient DNA-based drug delivery carriers, but also shines a light on the development of safe, multifunctional bio-tools for the next generation of the diagnosis and treatment of disease,” says Wang. “With proper modification, this system may also be suitable for delivery of non-drug systems, such as bioprobes for imaging and small interfering RNA (siRNA) molecules for gene therapy.”

Co-authors of the study include Dr. Yun Zeng, Dr. Wenyan Liu and Shuo Yang from Missouri S&T and collaborator Dr. Liang Xu and his group member Jiajun Liu from the University of Kansas, Lawrence. The study was supported by University of Missouri Research Board, Missouri S&T’s Materials Research Center and Center for Biomedical Research, the National Institutes of Health, and the Department of Defense Breast Cancer Research Program Breakthrough Level II.

Journal of Materials Chemistry B