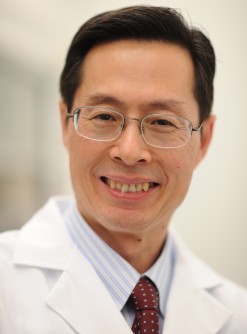 Newswise — ATLANTA—Roflumilast, a drug recently approved in the United States to treat severe chronic obstructive pulmonary disease (COPD), increases the production of a protein that causes inflammation, which possibly results in patients developing a tolerance to the drug after repeated use and makes the drug less effective, according to researchers at Georgia State University, Kumamoto University and the University of Rochester Medical Center.

The findings, published on March 23 in the Proceedings of the National Academy of Sciences USA, may help explain the development of tolerance to roflumilast and may assist with developing new therapeutics to improve the efficacy of the drug.

COPD is the fourth-leading cause of death worldwide. This progressive disease causes airflow blockage and breathing-related problems, such as coughing that produces large amounts of mucus, wheezing, shortness of breath and chest tightness. Cigarette smoking is the leading cause of COPD, according to the National Heart, Lung and Blood Institute.

Roflumilast, a new drug class for the treatment of COPD, was approved by the U.S. Food and Drug Administration in 2011 to decrease the frequency of flare-ups or worsening of symptoms from severe COPD. The drug is known commercially as Daliresp.

“There is clinical evidence showing that patients could develop a tolerance if they keep taking repeated dosing of this drug, but why or how has been unknown. If we can figure out why people have a tolerance, we can probably improve the therapeutics,” said Dr. Jian-Dong Li, director of the Institute for Biomedical Sciences at Georgia State and a Georgia Research Alliance Eminent Scholar in Inflammation and Immunity.

It is important to develop new therapeutics to improve the efficacy of roflumilast because there is no effective therapeutic for severe COPD, Li said.

“We found there is some inflammatory response which cannot be suppressed by the drug because it has little to do with the enzyme activity,” Li said. “The patient keeps taking the drug and over time, you give more drug and you produce more target protein, which is even more counterproductive for suppressing inflammation. Over time, we develop a tolerance.”

The researchers also identified an important protein called PKA-Cβ, which can be targeted to reduce the unwanted production of PDE4B2.

In addition, they found roflumilast works with the major bacterial pathogen that causes symptoms to worsen in severe COPD to increase production of the unwanted protein PDE4B2 in a synergistic manner.

Li said the counterproductive activity of roflumilast is similar to using a fire extinguisher to bring down a fire, but at the same time, the fire extinguisher itself is increasing the amount of flammable material causing the fire.

This study is funded by the National Institutes of Health.

Proceedings of the National Academy of Sciences, March 2015