Researchers Find a Fast Road Out of Poverty

Revamps, such as surfacing roads and joining them to the city grid, dramatically push up land and property prices and release credit 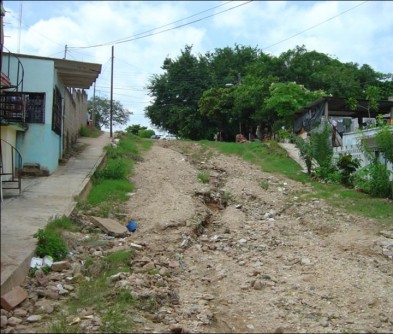 The study looked at an infrastructure scheme in the Mexican city of Acayucan. Households relied on dirt tracks before work was done to lay asphalt roads. 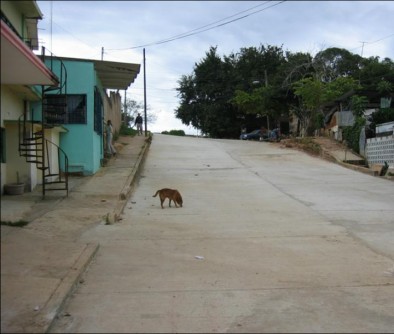 The study measured the wealth effect of having a road laid alongside the properties in Acayucan, Mexico.

Newswise — New research has measured the 'wealth effect' of upgrading the infrastructure in poorer sections of cities. Revamps, such as surfacing roads and joining them to the city grid, dramatically push up prices of the adjoining land and properties, says the study to be published in the journal, The Review of Economics and Statistics. Researchers from the University of Oxford and the University of Toronto measured how households who owned property in the upgraded roads were also allowed to spend more on credit so they could buy items for the home or cars that made them better off.

The researchers examined the effects of a publicly funded infrastructure project in the Mexican city of Acayucan where 28 out of 56 streets joined up by dirt tracks were due to be upgraded. The 28 streets selected to be resurfaced were chosen through a lottery. Surveys were carried out before worked started in 2006 and after the work, in 2009, among households lining the affected roads. The scheme was the first infrastructure randomised controlled trial, with households in streets without the upgrade acting as the control group, says the study.

The publicly funded scheme resulted in some streets receiving asphalt surfacing, designated lanes and parking spaces and, very importantly, roads that were connected to the city grid for the first time. Poor Mexican households who owned properties adjoining the new roads quickly became much wealthier than those in streets without the upgrades.

Between 2006 (when work started) and 2009 (after the roads had been laid), plots of land with 'good' roads went up by an estimated 72% based on real estate agents' appraisals compared with those next to dirt tracks. The researchers also calculated a 17% rise in property values (land and house), but this rise was found to be even higher - at 28% - when based on homeowners' valuations compared with other streets. Rental values were also 36% higher compared with rents on properties situated next to dirt tracks.

The homeowners' credit ratings also rose among those who had benefited from the rise in properly values. Surveys with residents show that those with good roads were able to undertake twice as many home improvement projects after 2009 compared with 2006. The number of households owning their own vehicle went up from one in every four to one in every three. In just two years, households with upgraded roads also owned around 12% more home appliances than they had before the work was done, says the study.

So could this increased consumption be attributed to a greater supply of financial services or does this opening up of credit result from increased property wealth? The researchers examined this question by asking households about credit access in 2006 before the scheme had started. They found those who make the most expensive purchases (such as cars or home improvements) already had some access to credit before the streets were upgraded, however, a rise in property values appears to have allowed them to take out more credit.

Study co-author Climent Quintana-Domeque, Associate Professor in Economics at the University of Oxford, said: 'This study has clear lessons for other poor districts, showing how the lives of people can be transformed relatively quickly through basic infrastructure improvements. Not only do they provide good road links, but give poorer households greater financial security. This can open up access to credit, meaning they can buy more basic items for the house or vehicles that make them more mobile, thereby bringing more job opportunities and giving them a better quality of life.'

Co-author Dr Marco Gonzalez-Navarro, from the University of Toronto, said: 'In the poverty reduction literature in recent years, there has been a push towards direct cash transfers to needy families. In developing countries this is done at the cost of infrastructure investment. For this reason, we were very excited to find the effects of street asphalting. For the first time, we showed a direct link between infrastructure investment and poverty reduction. Poor households were able to use their increased property wealth to buy more cars and goods for the home.'

Before and after images of one of the streets are available on request.

The paper, 'Paving Streets for the Poor: Experimental Analysis of Infrastructure Effects', is due to be published in the Review of Economics and Statistics in May 2016: http://www.mitpressjournals.org/page/journal/forthcoming.jsp?journalCode=rest

The municipal government of Acayucan reported that the infrastructure project cost 11,304,642 Mexican pesos (about 1,000,000 USD at that time). 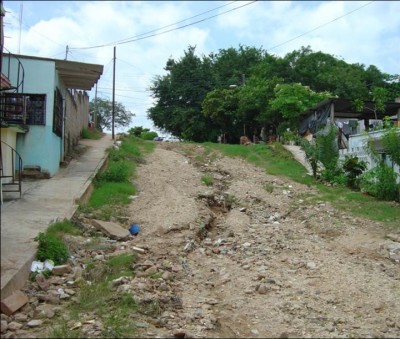 Caption: The study looked at an infrastructure scheme in the Mexican city of Acayucan. Households relied on dirt tracks before work was done to lay asphalt roads. 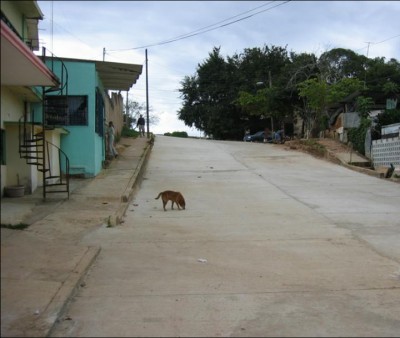 Caption: The study measured the wealth effect of having a road laid alongside the properties in Acayucan, Mexico.