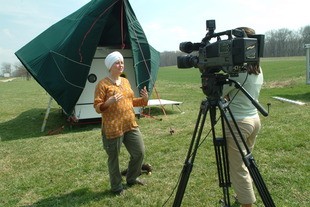 A portable laboratory with living quarters above was designed by faculty and students at Virginia Tech. Taranjit Kaur explained the arrangement during an interview before the PLUG was shipped to Africa. 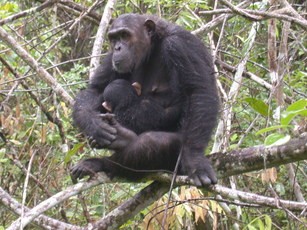 Chimpanzees living at Mahale Mountains National Park have been suffering from a respiratory disease that is likely caused by a variant of a human paramyxovirus.

Newswise — After studying chimpanzees in the wilds of Tanzania's Mahale Mountains National Park for the past year as part of a National Science Foundation (NSF) grant, Virginia Tech researcher Dr. Taranjit Kaur and her team have produced powerful scientific evidence that chimpanzees are becoming sick from viral infectious diseases they have likely contracted from humans.

In an article to be published in the August issue (available on-line in June) of the American Journal of Primatology featuring a special section on "Disease Transmission, Ecosystems Health and Great Apes Research," Dr. Kaur, an assistant professor in the Virginia-Maryland Regional College of Veterinary Medicine's Department of Biomedical Sciences and Pathobiology at Virginia Tech, will report the results of extensive field studies conducted in the jungles of Africa.

The journal article will present data from molecular, microscopic and epidemiological investigations that demonstrate how the chimpanzees living at Mahale Mountains National Park have been suffering from a respiratory disease that is likely caused by a variant of a human paramyxovirus.

The work complements and validates work published in a recent edition of Current Biology by investigators from European research institutes that describes evidence of human viruses in deceased chimpanzees found in West Africa's TaÃ¯ Forest.

"Although evidence increasingly suggests that infectious diseases may be transmitted from research teams and eco-tourists to endangered great apes, we believe that this is still a bit of a leap and more research must be conducted in order to establish a comfortable level of proof," said Kaur who has been unraveling the mystery in collaboration with scientists at the Centers for Disease Control and Prevention in Atlanta and researchers from Japan who are conducting behavioral studies on Mahale chimpanzees.

"Exactly where this virus has come from and the specific route of transmission remains unclear at this time," said Kaur, but she admits that mounting evidence suggests a linkage between visiting scientists and tourists and the viruses that are threatening the endangered chimpanzee population.

Scientific establishment of that linkage could affect the eco-tourism industry, which is an important source of economic development in the region and has been credited with protecting the animals from poachers and the dangers of shrinking habitats for chimpanzees and other species of great apes. She believes more research must be conducted in order to protect the region through science-based changes and interventions.

Contributing to the efficacy of Kaur's scientific work is her background as a veterinarian who is board-certified by the American College of Laboratory Animal Medicine and her expertise in public health. "In the past, investigators have been bringing parts of the natural world into the laboratory for scientific study," she said. "Now we can bring the expertise and rigor of the laboratory into the natural world."

The researchers can do that because of the development and deployment of an innovative, eco-friendly field laboratory called "PLUG," which is an acronym for "portable laboratory on uncommon ground." After Kaur's husband and research partner, Dr. Jatinder Singh, a research assistant professor and molecular biologist, expressed frustration over "trying to conduct space-age science with stone-age tools at geographically remote study sites," the pair collaborated with Virginia Tech's College of Architecture and Urban Studies (CAUS) to develop a prototype field laboratory.

Working with Matt Lutz of CAUS and a team of university students, using "biomimicry" as the initial design direction, and incorporating state-of-the-art environmental technology to model the adaptability found in living organisms, the PLUG was born. The field laboratory weighs much less than a ton and can be assembled and disassembled in only a few hours by as few as two people using no tools. PLUG was field-tested in March 2007 then packaged for transatlantic shipment where further 'in-situ' testing has been conducted at Mahale Mountains National Park.

The PLUG has become an integral part of the base station where Kaur, Singh, and their four-year old daughter have been living in western Tanzania on the shores of Lake Tanganyika, the second deepest lake in the world, as part of a broader research project that seeks to establish a long-term health-monitoring program for these endangered great apes.

The project is sponsored through a five-year National Science Foundation CAREER grant awarded to Dr. Kaur in 2003 so she can develop a more "holistic" approach for the integration of technology, research and education through a program called "Bush-to-Base Bioinformatics."

Kaur and Singh have been working for several years with Tanzania National Parks (TANAPA) and Tanzania Wildlife Research Institute (TAWIRI) officials on the project that seeks to protect the endangered species. The family has learned to adjust and function in the bush, where diseases such as malaria and cholera can be contracted, and dangerous creatures like black mambas, crocodiles, leopards, and others must be avoided.

Living in the wild has also encouraged their resourcefulness. A stubborn warthog kept digging up an area near the PLUG's external photo-voltaic cables and batteries. Their solution was to install an automobile alarm. The loud, piercing voice ordering the marauding warthog to "Step away from the car, step away from the car" every time it disturbed the laboratory seemed to solve the problem.

Caption: A portable laboratory with living quarters above was designed by faculty and students at Virginia Tech. Taranjit Kaur explained the arrangement during an interview before the PLUG was shipped to Africa.

Caption: Chimpanzees living at Mahale Mountains National Park have been suffering from a respiratory disease that is likely caused by a variant of a human paramyxovirus.