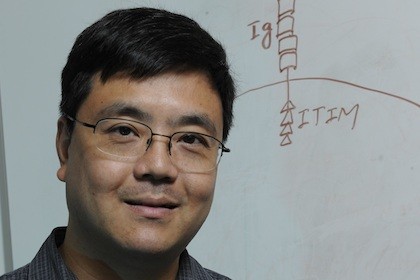 Newswise — DALLAS – Oct. 23, 2018 – UT Southwestern scientists, working with colleagues at a sister institution in Houston, have identified a new target for battling a deadly form of leukemia.

The findings raise the possibility of a novel treatment for this subtype of blood and bone marrow cancer – known as acute myeloid leukemia or AML – by attacking a harmful molecule found on the cancerous cells and also reactivating the body’s white blood cells to fight them.

The study, published in Nature, found that the molecule leukocyte immunoglobulin-like receptor B4, or LILRB4, can turn off white blood cells that normally fight AML. The molecule also helps the cancer spread to internal organs such as bone marrow, the liver, and the brain.

“AML is a terrible disease. The five-year survival rate is 27 percent in the U.S., even after treatment,” said Dr. Chengcheng “Alec” Zhang, senior author of the study and Professor of Physiology at UT Southwestern. “We identified a new target for treatment of some types of AML.”

Each year in the U.S., about 20,000 new cases of AML are diagnosed and more than 10,000 people die of the disease, according to the National Cancer Institute. The subtypes of AML involved in this study are those known as “monocytic” leukemia cells.

UT Southwestern researchers zeroed in on LILRB4 in 2013 because of early evidence that it was the culprit turning off the body’s immune response against monocytic AML. First, they uncovered the mechanism the molecule uses to do that, Dr. Zhang said, and then they began looking for an antibody that could disarm LILRB4 by blocking its signaling to turn off the white blood cells.

The following year, UT Southwestern teamed up with The University of Texas Health Science Center at Houston (UTHealth) to collaborate with researchers respected for work with antibodies, Drs. Zhiqiang An and Ningyan Zhang, who had previously worked in the biotechnology and pharmaceutical industry.

Together, the two institutions developed an antibody that can inhibit LILRB4 in mouse models injected with human leukemia cells. The UT System has exclusively licensed the related patent applications to California-based Immune-Onc Therapeutics Inc., which contributed to the research and is conducting preclinical studies.

If those studies go well, an application to the Food and Drug Administration to begin human clinical trials could come as early as next year, said Dr. Zhang, who holds the Hortense L. and Morton H. Sanger Professorship in Oncology and is a Michael L. Rosenberg Scholar in Medical Research.

(Dr. Zhang is a Scientific Advisory Board member with Immune-Onc Therapeutics. He also owns stock in and has a sponsored research agreement with the company.)

Dr. Zhang, also a member of the Harold C. Simmons Comprehensive Cancer Center, said he is optimistic about the antibody’s treatment prospects, for multiple reasons. The LILRB4 molecule is located on the surface of cells, making it more accessible to antibody drugs. In addition, it may be possible for the treatment to combine targeted therapy directed against the cancer cells with immunotherapy using the reactivated white blood cells. Furthermore, LILRB4’s limited expression in normal cells suggests targeting it would have low toxicity for the body as a whole – an important plus for cancer treatments.