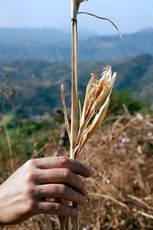 Balsas teosinte, a large wild grass that grows in the Central Balsas River Valley of Mexico. Maize domesticated from Balsas teosinte more than 8700 years ago.

Newswise — Maize was domesticated from its wild ancestor more than 8700 years according to biological evidence uncovered by researchers in the Mexico's Central Balsas River Valley. This is the earliest dated evidence -- by 1200 years -- for the presence and use of domesticated maize.

The researchers, led by Anthony Ranere of Temple University and Dolores Piperno of the Smithsonian National Museum of Natural History, reported their findings in two studies -- "The Cultural and chronological context of early Holocene maize and squash domestication in the Central Balsas River Valley, Mexcio" and "Starch grain and phytolith evidence for early ninth millennium B.P. maize from the Central Balsas River Valley, Mexico" -- being published in the PNAS Early Edition, March 24.

According to Ranere, recent studies have confirmed that maize derived from teosinte, a large wild grass that has five species growing in Mexico, Guatemala and Nicaragua. The teosinte species that is closest to maize is Balsas teosinte, which is native to Mexico's Central Balsas River Valley.

"We went to the area where the closest relative to maize grows, looked for the earliest maize and found it," said Ranere. "That wasn't surprising since molecular biologists had determined that Balsas teosinte was the ancestral species to maize. So it made sense that this was where we would find the earliest domestication of maize."

The study began with Piperno, a Temple University anthropology alumna, finding evidence in the form of pollen and charcoal in lake sediments that forests were being cut down and burned in the Central Balsas River Valley to create agricultural plots by 7000 years ago. She also found maize and squash phytoliths -- rigid microscopic bodies found in many plants -- in lakeside sediments.

Ranere, an archaeologist, joined in the study to find rock shelters or caves where people lived in that region thousands of years ago. His team carried out excavations in four of the 15 caves and rock shelters visited in the region, but only one of them yielded evidence for the early domestication of maize and squash.

Ranere excavated the site and recovered numerous grinding tools. Radiocarbon dating showed that the tools dated back at least 8700 years. Although grinding tools were found beneath the 8700 year level, the researchers were not able to obtain a radiocarbon date for the earliest deposits. Previously, the earliest evidence for the cultivation of maize came from Ranere and Piperno's earlier research in Panama where maize starch and phytoliths dated back 7600 years.

Ranere said that maize starch, which is different from teosinte starch, was found in crevices of many of the tools that were unearthed.

"We found maize starch in almost every tool that we analyzed, all the way down to the bottom of our site excavations," Ranere said. "We also found phytoliths that comes from maize or corn cobs, and since teosinte doesn't have cobs, we knew we had something that had changed from its wild form."

Ranere said that their findings also supported the premise that maize was domesticated in a lowland seasonal forest context, as opposed to being domesticated in the arid highlands as many researchers had once believed.

"For a long time, I though it strange that researchers argued about the location and age of maize domestication yet never looked in the Central Balsas River Valley, the homeland for the wild ancestor," said Ranere. "Dolores was the first one to do it.'

In addition to Ranere and Piperno, other researchers in the study included Irene Holst of the Smithsonian Tropical Research Institute, Ruth Dickau of Temple, and Jose Iriarte of the University of Exeter. The study was funded by the National Science Foundation, National Geographic Society, Wenner-Gren Foundation, Smithsonian National Museum of Natural History, Smithsonian Tropical Research Institute and the Temple University College of Liberal Arts.