Two Texas Tech faculty members say the genes found in the blood-feeders’ saliva also can be found in humans and most other animals. 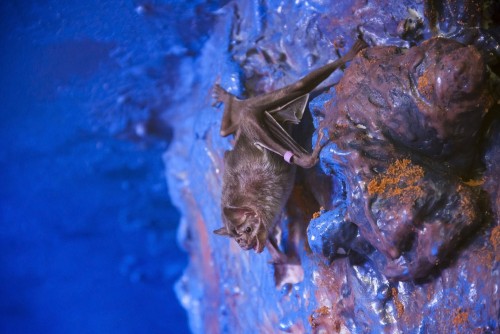 Newswise — As the closest real-world cousin of a Halloween nightmare, the vampire bat is unique among vertebrates because it feeds only on the blood of other mammals. But according to new research from two Texas Tech University faculty members in the Department of Biological Sciences, these bats may now be specially designed for it.

In their soon-to-be-published study “Secretory gene recruitments in vampire bat salivary adaptation and potential convergences with sanguivorous leeches,” Caleb D. Phillips, an assistant professor and curator of genetic resources at the Natural Science Research Laboratory, and Robert Baker, Horn professor emeritus and curator of mammals emeritus at the Natural Science Research Laboratory, said some of the venomous contents in the bats’ saliva likely evolved by recruiting ancestral genes to produce new transcript molecules rather than by creating completely new gene sequences.

“Using comparative gene expression approaches, we saw vampire bats and leeches, both blood-eating species, express some of the same gene products in their salivary glands, and the known biological function of some of these molecules is expected to be adaptive to the needs of blood-eaters, such as numbing the bite site or preventing blood clotting,” Phillips said. “Interestingly, these gene products do not appear to be secreted from the salivary glands of related insect-eating bats, but the genes that code for them are present in their genomes, just as they are in our human genomes and those of most animals.”

Vampire bats, which are native to the Americas, evolved over the last five million years when insect-eating ancestral bats developed a complex combination of physical and physiological traits that enabled blood-eating.

“We identified at least three genes that would be beneficial for blood-eating by producing molecules that interfere with host nervous response and blood coagulation,” Phillips said.

These results indicate the process of gene recruitment, which is the new expression of ancestral genes in new tissue and cellular locations, has been an important genomic mechanism in the evolution of blood-feeding.

Phillips and Baker present two mechanisms that enable this recruitment of ancestral genes to produce novel secretory transcripts in vampire bats: exon microdeletions, the removal of small sequences of the gene in the genome, and alternative splicing, variation in which parts of the gene are pieced together into the final product. Much like how skipping different keywords when re-reading a paragraph can lead to different messages, different transcript molecules can be obtained depending on which exons are used, and this can lead to different biological functions. In the case of vampire bats, these mechanisms appear to have allowed for the recruitment of molecules to be secreted from vampire bat salivary glands.

“Future studies that will include larger comparisons among bats, other blood-eating species and additional tissues are needed to clearly describe the importance of gene recruitment, alternative splicing and genome reorganization for the evolution of blood-eating,” Phillips said. “Our work provides new insights about genomic adaptations underlying blood-eating in the remarkable evolution of vampire bats.”

The work was funded by the Texas Biological Database Program, and published in the open-access scholarly journal Frontiers in Ecology and Evolution.