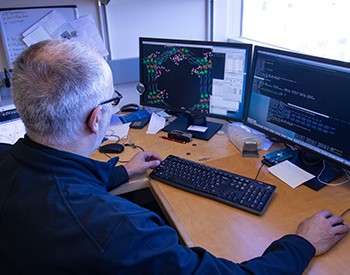 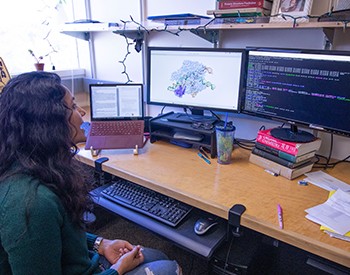 Newswise — The waters of science are muddy these days—especially at the University of California San Diego where all that separates a chemist from a physicist in some cases is office drywall. Chemists ask the questions in their experiments, and physicists supply the answers with the tools needed to do the job. Sometimes that job needs to be quicker and easier, so a computational expert is called in. Add a biological specialist to the mix and you’ve got a recipe for cutting-edge science that breaks bounds. And the beauty of the bound-breaking in Chemist Francesco Paesani’s “lab” begins with the most basic of elements—water.

“Water is a key solvent, and the substance that has been studied the most historically,” explained Paesani, professor in the UC San Diego Department of Chemistry and Biochemistry. “It is dynamic; it moves constantly and creates bonds that sometimes break apart—similar to partners on a dance floor. We’ve been successful modeling it.”

What that means is Paesani and his team of researchers—from undergraduates to postdoctoral scholars—applies computational chemistry to simulate realistic chemical processes. In ocean water, for example, those processes occur between the water molecules and a multitude of organic and biological compounds. To model the reactions, Paesani’s research group transforms the chemical realities of ocean water into a computerized model matrix of colorful molecules that dance around the screen. The simulation gives rise to observations that can be probed, measured and calculated to test how they match up with the real thing.

With support from the U.S. Department of Energy, the job of Paesani’s virtual lab is to collect data on the properties of materials like water, apply it to machine learning, optimize the material through modifications based on simulations and then synthesize an ideal material that could be used, for example, to extract water from the atmosphere.

“The hydrogen bonds of water are critical for all life,” noted Paesani. “Water is the only solvent that can make the bonds just right. If we could expose a certain material to air, we could extract water from the atmosphere, where it is always present—during the day it is in a gaseous state, at night it liquefies. If we have a material that acts like a sponge to absorb the small traces of water vapor, we can make progress toward addressing water scarcity on the planet.”

The researchers bridge the gap between material reality and computerized simulations by conducting experiments using light, for example, to probe the interactions between molecules, from small gaseous clusters to complex aqueous solutions. Resulting from these interactions is a vibrational spectrum reflective of how water molecules interact with each other and other components of the solution, which can be calculated from simulations and displayed on screen.

“Most chemistry happens at the interfaces,” said Paesani. “The outcomes of the science could potentially apply to electrochemistry and the crowded environment of a cell. We are pushing the boundaries of computational chemistry, asking the question on how to reproduce reality in a faithful way.”

According to chemistry graduate student Teri Lambros, the research he conducts with the Paesani Research Group offers the prospect of doing chemistry realistically on the computer.

To assist them with their computations, Paesani group members make use of supercomputing resources at the San Diego Supercomputer Center (SDSC) on campus. Both the National Science Foundation (NSF)-funded supercomputer known as Comet, used by researchers around the world, and the Triton Shared Computing Cluster (TSCC), designed primarily for UC San Diego researchers, are of large importance to the Paesani group and researchers like them. The scientists depend on Comet, a massively parallel supercomputing resource, and TSCC, a mid-scale research cluster, to run molecular dynamics simulations or other data-intensive calculations that would simply not be possible on traditional desktop computers.

SDSC enables Paesani’s team to run molecular dynamics simulations in parallel, speeding up their work and increasing their efficiency. Much of the group’s work, for example, requires exploring the multitude of ways the molecules in a system of interest can rearrange and reorient for a given temperature, pressure, volume, etc. This typically requires running large numbers of trajectories for long time scales. In general, the longer and larger the system they model, the more thoroughly and completely they have recreated the states its real-world counterpart would experience. Comet’s highly parallelizable environment and many-core processors are therefore well-suited to aiding their work.

“The goal is to advance science with results that theorists can build on,” said Paesani, adding what he often tells his students, “It’s not the home run, but the Hall of Fame that counts.”