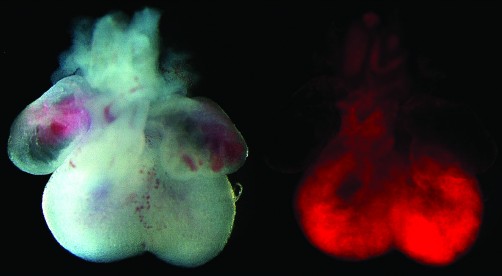 The left image is of an embryonic mouse heart, showing the four chambered structure with atria at the top and ventricles at the bottom. The right image is the fluorescent lineage tracing reporter, showing that our newly discovered progenitor cell population contributes specifically to the ventricular chambers of the heart.

{Click here for an image of the heart showing the four-chambered structure with atria at the top and ventricles at the bottom.} @MountSinaiNYC @MindichCHDI

Newswise — (New York – February 14, 2017) A population of cells in early development may give rise to the ventricular chambers of the heart, but not the atria, according to a study led by researchers from the Mindich Child Health and Development Institute at the Icahn School of Medicine at Mount Sinai and published today in Nature Communications.

Congenital heart defects are the most common type of birth defect, affecting 35,000 babies in the United States each year, according to the U.S. Department of Health and Human Services. Many of these defects originate as the heart chambers are forming. While much is known about the development of the heart, the formation of the four distinct chambers of the heart has lacked thorough understanding.

Using a model that traces cell lineage in mice, investigators studied the protein-coding gene Foxa2, primarily associated with endoderm and ectoderm development during embryogenesis. They discovered a population of progenitor cells expressing Foxa2 during early development that gave rise to cardiovascular cells of both the left and right ventricular chambers, but not the atria. Their research showed that atrial-ventricular segregation may occur long before the morphological establishment of differentiated cardiac structures.

“An in-depth understanding of the formation of the heart chambers will enable us to better comprehend the biology behind detrimental heart defects and how best to address them,” said lead investigator Nicole Dubois, PhD, Assistant Professor in the Department of Cell, Developmental and Regenerative Biology at the Icahn School of Medicine at Mount Sinai. “In addition to informing our understanding of early heart development, we hope that these findings will also lead to new protocols for the generation of ventricular cardiomyocytes in cell culture that could potentially be used in therapeutic settings.” “There is a lot we still don’t understand about this population, or the function of Foxa2 during the formation of the heart, but we think these findings provide a powerful new system to answer some of the most relevant open questions about how early heart development occurs,” said Evan Bardot, PhD student and first author of the Nature Communications study.

The National Institutes of Health (NIH/NHLBI) and the Mindich Child Health and Development Institute supported this research.

The Mount Sinai Health System is an integrated health system committed to providing distinguished care, conducting transformative research, and advancing biomedical education. Structured around seven hospital campuses and a single medical school, the Health System has an extensive ambulatory network and a range of inpatient and outpatient services—from community-based facilities to tertiary and quaternary care.

The System includes approximately 6,100 primary and specialty care physicians; 12 joint-venture ambulatory surgery centers; more than 140 ambulatory practices throughout the five boroughs of New York City, Westchester, Long Island, and Florida; and 31 affiliated community health centers. Physicians are affiliated with the renowned Icahn School of Medicine at Mount Sinai, which is ranked among the highest in the nation in National Institutes of Health funding per investigator. The Mount Sinai Hospital is ranked as one of the nation’s top 10 hospitals in Geriatrics, Cardiology/Heart Surgery, and Gastroenterology, and is in the top 25 in five other specialties in the 2014-2015 “Best Hospitals” issue of U.S. News & World Report. Mount Sinai’s Kravis Children’s Hospital also is ranked in seven out of ten pediatric specialties by U.S. News & World Report. The New York Eye and Ear Infirmary of Mount Sinai is ranked 11th nationally for Ophthalmology, while Mount Sinai Beth Israel is ranked regionally.