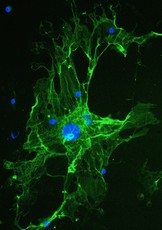 A hepatic stellate cell activated by the p75 Neurotrophin Receptor promotes repair in the liver.

Newswise — In studies in mouse models, researchers at the University of California, San Diego (UCSD) School of Medicine have found that a cellular receptor involved in triggering cell death is also a necessary component of tissue repair and regeneration immediately following liver injury. This discovery could have implications for early intervention or therapy in liver disease such as cirrhosis or hepatitis.

In a report to be published in the March 30 issue of the journal Science, Katerina Akassoglou, Ph.D. assistant professor in UCSD's Department of Pharmacology, and colleagues describe the mechanism by which cells associated with liver damage, called hepatic stellate cells (HSCs), are activated by a cell surface molecule called the p75 neurotrophin receptor (p75NTR) to promote repair in the liver.

"Many therapeutics for liver disease target HSCs in order to kill them, but our study in animal models found that their initial activity could actually be protective," said Akassoglou.

When chronic liver injury occurs, cells in the liver begin producing collagen and other proteins that lead to the formation of fibrous tissue and scarring. Akassoglou's team looked at the molecular-cellular interface to discover how tissues respond to deposition of the fibrous protein, fibrin. In studies of a mouse model with excessive fibrin deposition in the liver, the researchers found that p75NTR signaling promotes the initial activation of HSC, which stimulates the proliferation of new hepatic cells to replace those that have been damaged. The effects of p75NTR at late stages of HSC activation and liver disease remain to be determined.

"We were intrigued by the increase of p75NTR expression after liver injury and hypothesized that p75NTR might regulate the progression of liver disease," said Akassoglou. "By identifying p75NTR as the specific molecular link between HSCs and liver regeneration, p75NTR could provide a new therapeutic target for promoting cell regeneration and repair during chronic liver disease or injury."

This discovery suggests the importance of sustaining p75 and early HSC activation " for example, in the case of liver transplantation when regeneration of liver cells is critical.

Additional contributors to the paper are first author Melissa A. Passino, Ryan A. Adams and Shoana L. Sikorski of the UCSD Department of Pharmacology. The research was supported by a grant from the National Institutes of Health/National Institute of Neurological Disorders and Stroke.