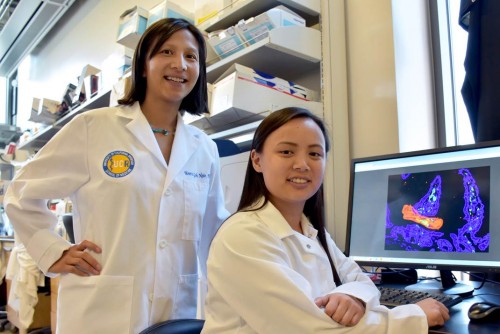 Photo shows Meera Nair (left) and Jessica Jang in the Nair laboratory at the UCR School of Medicine. 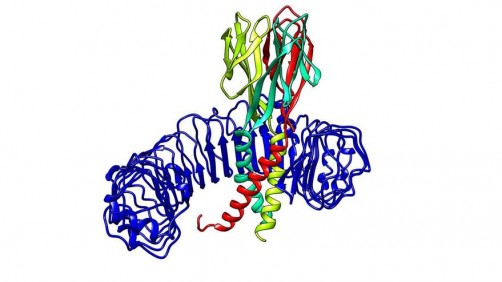 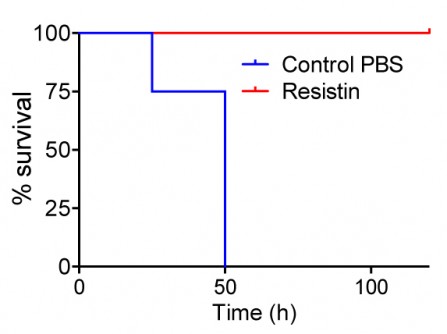 Newswise — RIVERSIDE, Calif. – A research team led by a biomedical scientist at the University of California, Riverside has discovered that the human protein resistin could be used to treat sepsis, the body’s extreme and uncontrolled immune response to an infection.

Sepsis kills about one in five affected people. Without timely treatment, this medical emergency can rapidly damage tissue and lead to organ failure. Using a transgenic mouse model expressing this hormone, the researchers found that mice expressing resistin had a 100 percent survival rate from a sepsis-like infection when compared to wild-type mice with the same infection.

“A lot of scientific literature has posited that resistin is harmful,” said Meera G. Nair, an assistant professor of biomedical sciences at UCR’s School of Medicine and lead author of the paper that appears in Proceedings of the National Academy of Sciences. “But we may have misunderstood this secreted protein in our blood. My lab was intrigued by why we make so much of a substance that is, supposedly, not good for us. Resistin, we have now found, has a benefit: it is protective in sepsis. Further, because our bodies make this therapeutic, there is no fear of it being rejected.”

Nair and her team found that human resistin decreases the number of pro-inflammatory cytokines — small secreted proteins that aid cell-to-cell communication in immune responses —  by binding to “Toll-like receptor 4” (TLR4), its receptor. This binding blocks TLR4 signaling in immune and inflammatory cells.

TLR4, a molecule found on the surface of cells, is the innate receptor of our immune system and recognizes danger from foreign pathogens. During sepsis, for example, it recognizes lipopolysaccharide (LPS), the major component in the cell wall of the sepsis-causing bacteria. Too much LPS results in an overstimulation of TLR4, and the immune system goes into overdrive. Nair and her colleagues have found that when resistin binds to TLR4 it prevents TLR4 from recognizing LPS, eventually minimizing the immune response.

“Sepsis is a consequence of bacterial infection,” Nair said. “Patients can be treated with antibiotics to kill bacteria. But even if the bacteria are killed, LPS is left behind. As a result, the immune system goes into overdrive even with no infection still around. That’s when other means become necessary to kill the bacteria and calm the immune system down. If we can stop the excessive immune response, we can stop sepsis.”

William Harnett, a professor of molecular immunology at the University of Strathclyde in the United Kingdom, explained that in spite of representing a very common medical emergency, sepsis remains difficult to treat, with newly tested strategies proving disappointing.

“Using state-of-the-art experimental procedures, Meera Nair and colleagues now suggest a new approach, an intriguing development given this human resistin was previously considered to contribute to sepsis,” said Harnett, who was not involved in the research. “The novel data they present reveal how resistin, by interacting with TLR4, can block the inflammatory responses induced by bacterial products that lead to sepsis. This is certainly an exciting finding and a noteworthy development in the drive to find new treatments for sepsis.”

Nair’s team also worked with blood cells donated by healthy people and found that resistin bound to TLR4 even in these cells. In collaboration with clinicians at the Riverside University Health System Medical Center, the team will soon test blood cells from septic patients. The School of Medicine Dean’s Research Innovation Fund will support these preliminary sepsis studies focusing on clinical samples.

Nair noted that other labs have infected mice with worms to alleviate sepsis.

“Worms can infect an estimated two-billion people worldwide,” she said. “Worms have evolved with us for millions of years. They have adapted and can reside in us long term. To live inside us, they turn down our immune system. How do they accomplish this? It’s possible that resistin is involved.”

“It’s always been puzzling why worms living in the gut don’t cause more problems with sepsis, as they cause tissue damage in the gut and the gut is full of bacteria,” said P’ng Loke, an associate professor of microbiology at New York University, who was not involved in the research. “The results from Dr. Nair’s study identify resistin as an important molecule induced by worms that could help prevent sepsis.”

Nair is also excited about the prospects for a new therapeutic sepsis treatment developed in her lab. Called Retn N-pep, this new compound was made in collaboration with Maurizio Pellecchia, a professor of biomedical sciences at UCR, director of the Center for Molecular and Translational Medicine (MOLMED), and a co-author on the research paper.

“Retn N-pep blocked TLR4,” said Nair, who is a member of MOLMED. “It is smaller and more effective than human resistin in blocking inflammation in human blood cells. Potentially, it could inhibit any inflammatory disease involving TLR4. Dr. Pellecchia is now optimizing Retn N-pep to fold better and be more effective. Fortunately, all the chips fell into place at UCR to allow for this clinical collaboration, placing the university at the forefront of translational, therapeutic research.”

Pellecchia, who holds the Daniel Hays Endowed Chair in Cancer Research at UCR, said the project is the fruit of Nair’s ingenuity and perseverance.

“I am confident that Retn N-pep, based entirely on Dr. Nair’s pivotal discoveries, can be translated into an effective and innovative treatment for sepsis,” he said.

While the research from Nair’s lab focused only on sepsis, human resistin may be useful in modulating inflammation in TLR4-mediated diseases and treating conditions that involve overactive TLR4 activation, such as autoimmune diseases and inflammatory bowel disease.

This technology has been disclosed and assigned UC case number 2016-672. The UCR Office of Technology Commercialization has filed a provisional patent on the technology.

Funding for the study was provided by the National Institutes of Health, UCR School of Medicine, UCR Academic Senate, UCR Office of Technology Commercialization, and American Association of Immunology.

The University of California, Riverside (www.ucr.edu) is a doctoral research university, a living laboratory for groundbreaking exploration of issues critical to Inland Southern California, the state and communities around the world. Reflecting California's diverse culture, UCR's enrollment is now nearly 23,000 students. The campus opened a medical school in 2013 and has reached the heart of the Coachella Valley by way of the UCR Palm Desert Center. The campus has an annual statewide economic impact of more than $1 billion. 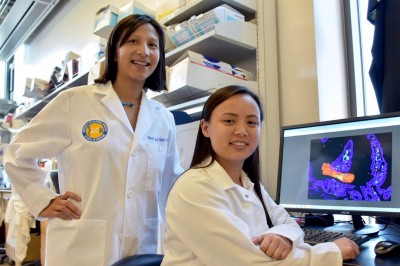 Caption: Photo shows Meera Nair (left) and Jessica Jang in the Nair laboratory at the UCR School of Medicine. 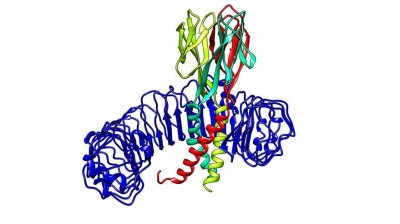 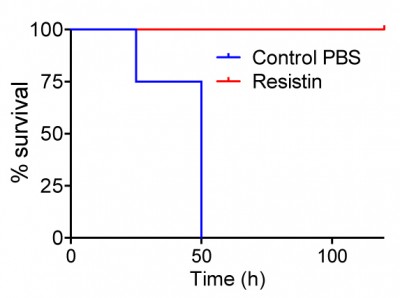