New findings could lead to treatments for age-related vascular disease 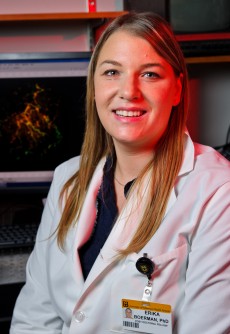 Newswise — COLUMBIA, Mo. (Sept. 8, 2015) ― With the world’s elderly population expected to double by 2050, understanding how aging affects the body is an important focus for researchers globally. Cardiovascular disease, the No. 1 cause of death worldwide, often is associated with aging arteries that restrict blood flow. Now, University of Missouri researchers have identified an age-related cause of arterial dysfunction, a finding that could lead to future treatments for some forms of vascular disease.

“Aging affects everyone and causes changes throughout our bodies,” said Erika Boerman, PhD, a post-doctoral fellow in the Department of Medical Pharmacology and Physiology at the MU School of Medicine and lead author of the study. “The purpose of our study was to understand how blood vessels are affected by this process. We found that older arteries had a significantly lower number of sensory nerves in the tissues surrounding them and they were less sensitive to an important neurotransmitter responsible for dilation.”

Boerman’s study focused on mesenteric arteries ― a type of artery that supplies blood to the small intestines ― of mice that were 4 months and 24 months old. These ages correspond to humans in their early 20s and mid-60s, respectively. Without stimulation, the diameter of the blood vessels of both younger and older mice was approximately the same. However, when stimulated to induce dilation, differences between the age groups became apparent.

“The younger arteries dilated as expected,” Boerman said. “However, when we performed the same stimulation to the arteries of older mice, the vessels did not dilate. When we examined the presence of sensory nerves, we noted a 30 percent decrease in the amount surrounding the older arteries compared to the younger arteries.”

Additionally, the researchers found that even when purposefully exposing older mesenteric arteries to defined amounts of the neurotransmitter calcitonin gene-related peptide, or CGRP, the arteries’ ability to dilate was greatly reduced.

“Poor neurotransmitter function and a reduced presence of sensory nerves surrounding older vessels lead to age-related dysfunction of mesenteric arteries,” Boerman said. “The importance of this discovery is that if we can identify why this happens to mesenteric arteries, it may be possible to prevent the same thing from happening to other blood vessels throughout the body.”

More research is needed to understand why aging affects sensory nerve distribution and neurotransmitter performance. However, identifying this new mechanism of vascular dysfunction opens the door for future studies that could eventually lead to the treatment of health issues such as stroke and cardiovascular disease.

The study, “Depressed Perivascular Sensory Innervation of Mouse Mesenteric Arteries with Advanced Age,” recently was published in The Physiological Society’s Journal of Physiology. In addition to Boerman, Steven Segal, a professor of medical pharmacology and physiology at the MU School of Medicine, contributed to the research. Funding for the study was provided by the National Institutes of Health (F32-HL118836 and R01-HL086483). The content of the article is solely the responsibility of the authors and does not necessarily represent the official views of the funding agencies.