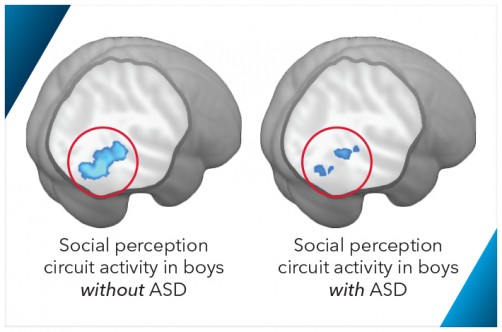 Social perception circuits of boys with and without ASD.

Newswise — WASHINGTON (April 20, 2016)—Researchers have developed a new method to map and track the function of brain circuits affected by autism spectrum disorder (ASD) in boys using brain imaging. The technique will provide clinicians and therapists with a physical measure of the progress patients are making with behavioral and/or drug treatments – a tool that has been elusive in autism treatment until this point.

For the first time, doctors would be able to quantify how that brain circuit is working in their patients and assess the effectiveness of an intervention. The research is outlined in a paper, “Evaluation of Quantified Social Perception Circuit Activity as a Neurobiological Marker of Autism Spectrum Disorder,” published Wednesday in JAMA Psychiatry. The paper focuses on the use of biomarkers, measurable indicators of a biological condition, to measure the function of the social perception circuit of the brain.

“This is significant because biomarkers give us a ‘why’ for understanding autism in boys that we haven’t had before,” said Kevin Pelphrey, a co-author of the paper, who is the Carbonell Family Professor in Autism and Neurodevelopmental Disorders and director of the Autism and Neurodevelopmental Disorders Institute at the George Washington University. “We can now use functional biomarkers to identify what treatments will be effective for individual cases and measure progress.”

Researchers analyzed a series of 164 images from each of 114 individuals and discovered the brain scans of the social perception circuits only indicated ASD in boys. This new research has the potential to improve treatment for ASD by measuring changes in the social perception brain circuit in response to different interventions. The researchers found the brain scan data can be an effective indicator of function of the circuit in younger children and older patients alike.

The research is particularly relevant for ASD patients who are difficult to diagnose and treat by providing a more definitive diagnosis and in developing a treatment program when it is not clear if behavioral, drug or a combination of the treatments will be most effective.

"The behavioral symptoms of ASD are so complex and varied it is difficult to determine whether a new treatment is effective, especially within a realistic time frame," said Malin Björnsdotter, assistant professor at the University of Gothenburg and lead author of the paper. "Brain function markers may provide the specific and objective measures required to bridge this gap."

A Path to Widespread use of Brain Scans?In addition to helping to identify the most effective ASD treatment for an individual, this research provides evidence that brain imaging is an important intervention tool. Currently, functional MRI, the type of brain scan used in this study, is not a standard part of ASD treatment, as there is not enough evidence linking the scan to effective treatments. The Autism and Neurodevelopmental Disorders Institute at GW aims to make significant contributions toward the establishment of evidence-based therapies for ASD.

“This kind of imaging can help us answer the question, ‘On day one of treatment, will this child benefit from a 16-week behavioral intervention?’” Dr. Pelphrey said. “Answering that question will help parents save time and money on diagnosis and treatments.”

Following the study, Dr. Pelphrey and his colleagues will test their findings at the next level: studying a larger pool of people with autism and other neurological disorders in collaboration with Children’s National Medical Center to see if the scan can successfully distinguish ASD from other disorders and track treatment progress.

The authors emphasized that this research is still in the earliest days, pointing out that doctors’ offices and most hospitals do not have the specialized imaging equipment necessary to carry out the brain scans used by the team involved in this study.

"To really help patients we need to develop inexpensive, easy-to-use techniques that can be applied in any group, including infants and individuals with severe behavioral problems," said Dr. Björnsdotter. "This study is a first step toward that goal."

While this method currently only works for boys with autism, the researchers are leading a large-scale, nationwide study of girls with autism to identify equivalent techniques that will work for them. The group expects to have the initial results from that study later this year. Multimedia Resources• Images of brain scans from the study available upon request.• Click here for a video of another GW researcher studying ASD -GW-