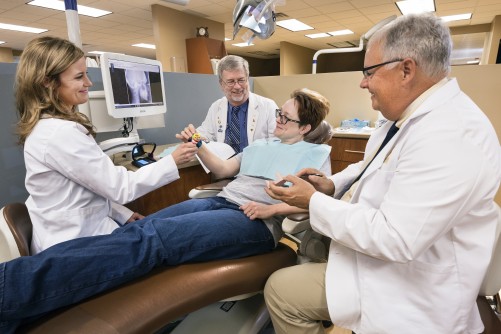 Breana Dieringer, a WVU School of Dentistry student, Chris Martin, an orthodontia professor, and Daniel McNeil, a clinical professor of dental practice and rural health, meet with a patient at WVU Dental Care. Their research into orthodontia treatment indicates that only half of Appalachian orthodontia patients complete their treatment.

Newswise — MORGANTOWN, W.Va.—Orthodontic care, such as braces, bite plates and retainers, typically costs between $3,000 and $8,000. But research out of the West Virginia University School of Dentistry suggests that only half of Appalachian orthodontia patients can complete their treatment.

WVU researchers Chris Martin, professor of orthodontia, Daniel McNeil, clinical psychologist and professor of dental practice and rural health, and third-year student of dentistry, Breana Dieringer, wanted to find out why. The researchers hope that by more accurately predicting which patients may have difficulty sticking with treatment, dentists and orthodontists can intervene.

They scrutinized five years of data from a general dentistry office in rural West Virginia and looked for patterns in who did or did not complete their treatment.

Of the 219 patients whose treatment plans and follow-ups were reviewed, just 49.8% completed their course of treatment. The most reliable predictor of treatment completion? Method of payment.

Nearly three-fourths of patients who paid for their orthodontia out of pocket finished their treatment, whereas only one-third of patients using private insurance, Medicaid or the Children’s Health Insurance Program completed treatment.

Other variables, such as age, gender, distance traveled, the type of bite misalignment and length of treatment, were investigated. None correlated to completion of treatment.

The findings were published in the journal “Frontiers in Public Health.”

Martin, who led the study, suspects culture may play a role in the disparity.

“There are certain attributes that people have in rural Appalachia—and I’m one of them,” he says. “God, country, family, loyalty, dedication, self-reliance and perseverance.”

Many of these traits are positive, Martin notes, but they also may encourage people to depend only on themselves and their families, discouraging them from seeking and completing the treatment their dentists and orthodontists recommend.

Patients who rely on Medicaid and CHIP may face the additional barrier of not being able to take time off from work, afford childcare or have access to reliable transportation.

“It is not uncommon to have an in-law, sibling or grandparent drive the patient to the office,” says Martin.

On average, patients in the study drove 38.8 miles—one way—to reach their provider’s office.

“Oftentimes people with Medicaid have to travel longer distances to get dental care and orthodontic care,” says McNeil. “Think about how difficult it is, particularly when you combine that with, say, the winter weather if you’re trying to travel a long distance in February.”

Poor oral hygiene, missed appointments and frequently broken appliances are all red flags, the researchers say. Perhaps forms of payment are, too.

“An improper bite can interfere with chewing, speaking and wearing down of teeth,” says Dieringer. “West Virginia has so many rural areas that need access to care, and it's important to understand the reasoning behind why dental care is not often a priority or a possibility for some families living in these areas.”