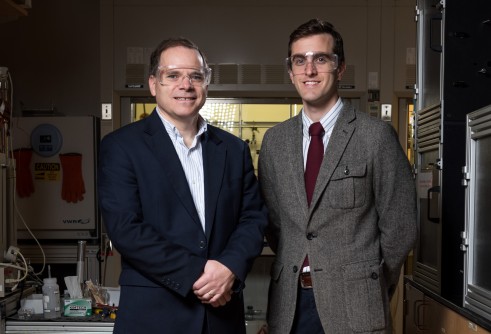 Thermally-based industrial chemical separation processes such as distillation now account for 10 to 15 percent of the world’s annual energy use. Researchers at the Georgia Institution of Technology are suggesting seven energy-intensive separation processes they believe should be the top targets for research into low-energy purification technologies. Shown are (l-r) David Sholl and Ryan Lively.

Newswise — Thermally-based industrial chemical separation processes such as distillation now account for 10 to 15 percent of the world’s annual energy use. Slaking the global thirst for energy could therefore get a substantial boost from improved technologies for producing fuels, plastics, food and other products with reduced inputs of energy.

In a comment article published April 26 in the journal Nature, two researchers from the Georgia Institute of Technology suggest seven energy-intensive separation processes they believe should be the top targets for research into low-energy purification technologies. Beyond cutting energy use, improved techniques for separating chemicals from mixtures would also reduce pollution, cut carbon dioxide emissions – and open up new ways to obtain critical resources the world needs.

Technologies applicable to those separation processes are at varying stages of development, the authors note. These alternative processes are now under-developed or expensive to scale up, and making them feasible for large-scale use could require a significant investment in research and development.

“We wanted to highlight how much of the world’s energy is used for chemical separations and point to some areas where large advances could potentially be made by expanding research in these areas,” said David Sholl, one of the article’s authors and chair of Georgia Tech’s School of Chemical & Biomolecular Engineering. “These processes are largely invisible to most people, but there are large potential rewards – to both energy and the environment – for developing improved separation processes in these areas.”

In the United States, substituting non-thermal approaches for purifying chemicals could reduce energy costs by $4 billion per year in the petroleum, chemical and paper manufacturing sectors alone. There’s also a potential for reducing carbon dioxide emissions by 100 million tons per year.

“Chemical separations account for about half of all U.S. industrial energy use,” noted Ryan Lively, an assistant professor in Georgia Tech’s School of Chemical & Biomolecular Engineering and the article’s second author. “Developing alternatives that don’t use heat could dramatically improve the efficiency of 80 percent of the separation processes that we now use.”

Dubbed the “seven chemical separations to change the world,” the list is not intended to be exhaustive, but includes:

• Hydrocarbons from crude oil. Hydrocarbons from crude oil are the main ingredients for making fuels, plastics and polymers – keys to the world’s consumer economy. Each day, the article notes, refineries around the world process around 90 million barrels of crude oil, mostly using atmospheric distillation processes that consume about 230 gigawatts of energy per year, the equivalent of the total 2014 energy consumption of the United Kingdom. Distillation involves heating the oil and then capturing different compounds as they evaporate at different boiling points. Finding alternatives is difficult because oil is complex chemically and must be maintained at high temperatures to keep the thick crude flowing.

• Uranium from sea water. Nuclear power could provide additional electricity without boosting carbon emissions, but the world’s uranium fuel reserves are limited. However, more than four billion tons of the element exist in ocean water. Separating uranium from ocean water is complicated by the presence of metals such as vanadium and cobalt that are captured along with uranium in existing technologies. Processes to obtain uranium from sea water have been demonstrated on small scales, but those would have to be scaled up before they can make a substantial contribution to the expansion of nuclear power.

• Alkenes from alkanes. Production of certain plastics requires alkenes – hydrocarbons such as ethane and propene, whose total annual production exceeds 200 million tons. The separation of ethene from ethane, for instance, typically requires high-pressure cryogenic distillation at low temperatures. Hybrid separation techniques that use a combination of membranes and distillation could reduce energy use by a factor of two or three, but large volumes of membrane materials – up to one million square meters at a single chemical plant – could be required for scale-up.

• Rare earth metals from ores. Rare earth elements are used in magnets, catalysts and high-efficiency lighting. Though these materials are not really rare, obtaining them is difficult because they exist in trace quantities that must be separated from ores using complex mechanical and chemical processes.

• Benzene derivatives from each other. Benzene and its derivatives are essential to production of many polymers, plastics, fibers, solvents and fuel additives. These molecules are now separated using distillation columns with combined annual energy usage of about 50 gigawatts. Advances in membranes or sorbents could significantly reduce this energy investment.

• Trace contaminants from water. Desalination is already critical to meeting the need for fresh water in some parts of the world, but the process is both energy and capital intensive, regardless of whether membrane or distillation processes are used. Development of membranes that are both more productive and resistant to fouling could drive down the costs.

Sholl and Lively conclude the paper by suggesting four steps that could be taken by academic researchers and policymakers to help expand the use of non-thermal separation techniques:

1. In research, consider realistic chemical mixtures and reflect real-world conditions, 2. Evaluate the economics and sustainability of any separation technique, 3. Consider the scale at which technology would have to be deployed for industry, and 4. Further expose chemical engineers and chemists in training to separation techniques that do not require distillation.