Researchers look for answers as to why western bumblebees are declining 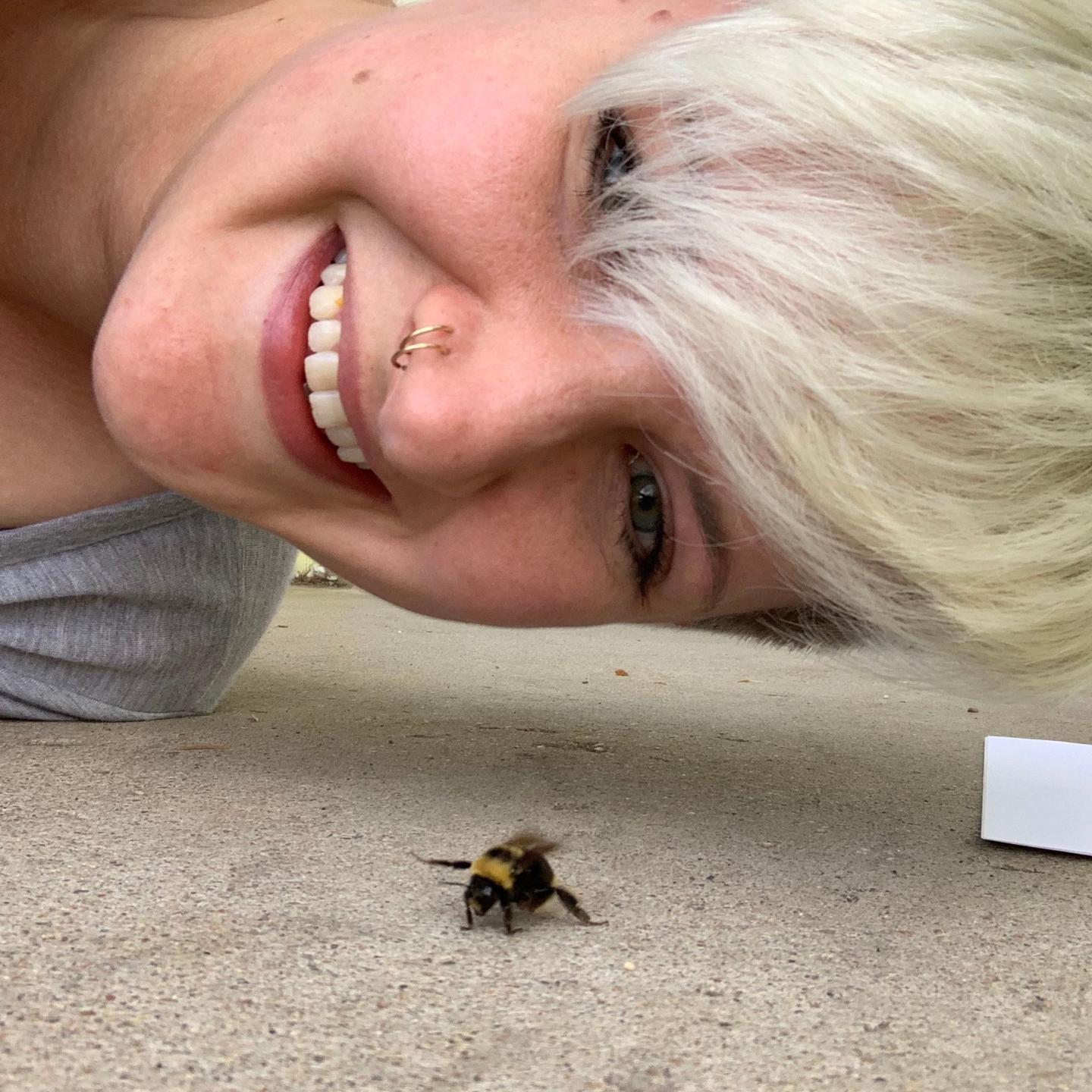 Christy Bell, a Ph.D. student in the University of Wyoming Department of Zoology and Physiology, observes a Western bumblebee. Bell and Lusha Tronstad, lead invertebrate zoologist with the Wyoming Natural Diversity Database, are co-authors of a paper about Western bumblebees. 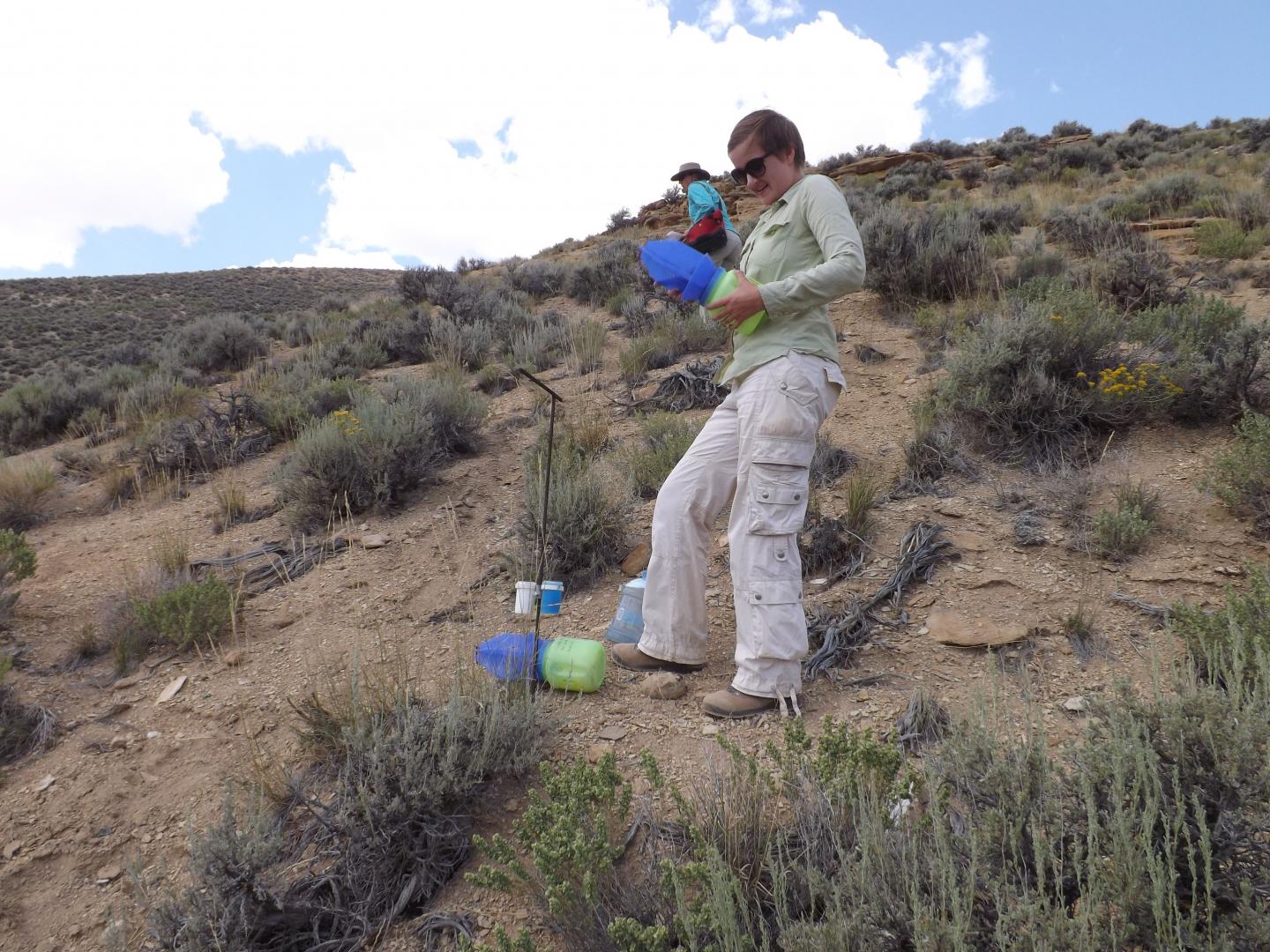 Newswise — A University of Wyoming researcher and her Ph.D. student have spent the last three years studying the decline of the Western bumblebee. The two have been working with a group of bumblebee experts to fill in gaps of missing information from previous data collected in the western United States. Their goal is to provide information on the Western bumblebee to the U.S. Fish and Wildlife Service while it considers listing this species under the U.S. Endangered Species Act.

"The decline of the Western bumblebee is likely not limited to one culprit but, instead, due to several factors that interact such as pesticides, pathogens, climate change and habitat loss," says Lusha Tronstad, lead invertebrate zoologist with the Wyoming Natural Diversity Database (WYNDD). "Western bumblebees were once the most abundant bumblebees on the West Coast of the U.S., but they are much less frequently observed there now. Pathogens (or parasites) are thought to be a major reason for their decline."

Tronstad and Christy Bell, her Ph.D. student in the Department of Zoology and Physiology, from Laramie, are co-authors of a paper, titled "Western Bumble Bee: Declines in the United States and Range-Wide Information Gaps," that was published online June 26 in Ecosphere, a journal that publishes papers from all subdisciplines of ecological science, as well as interdisciplinary studies relating to ecology.

This paper is the result of the Western Bumble Bee Working Group, which is a group of experts on this species who came together to assemble the state of knowledge on this species in the United States and Canada, Tronstad says. The paper shows both what is known and knowledge gaps, specifically in the lack of samples and lack of knowledge about the species. Some prime examples of where spatial gaps in limited sampling exist include most of Alaska, northwestern Canada and the southwestern United States.

"Some areas in the U.S. have less bumblebee sampling in the past and present," Tronstad explains. "This could be for a variety of reasons such as lack of funding for such inventories, lack of bee expertise in that state, etc."

"The data we assembled will be used by the U.S. Fish and Wildlife Service to inform its decision on whether or not to protect the Western bumblebee under the U.S. Endangered Species Act," Tronstad says. "At WYNDD, we collect data, and that data is used by managers. Our mission is to provide the most up-to-date data on which management decisions can be based."

Tronstad says there are several things that homeowners or landowners can do to help this species of bumblebee survive and thrive. These include:

Tronstad says Bell's research will continue this summer, as Bell will investigate pathogens in the Rocky Mountains of Wyoming that affect Western bumblebees there. Max Packebush, a UW sophomore majoring in microbiology and molecular biology, from Littleton, Colo.; and Matt Green, a 2018 UW graduate from Camdenton, Mo., will assist Bell in her research. NASA and the Wyoming Research Scholars Program will fund Packebush to conduct his work. The U.S. Geological Survey and the U.S. Fish and Wildlife Service funded the research for this paper.

Caption: Christy Bell, a Ph.D. student in the University of Wyoming Department of Zoology and Physiology, observes a Western bumblebee. Bell and Lusha Tronstad, lead invertebrate zoologist with the Wyoming Natural Diversity Database, are co-authors of a paper about Western bumblebees.