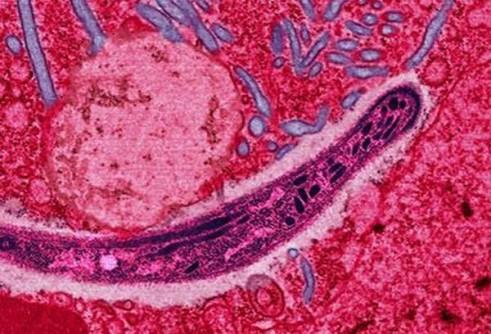 Newswise — Researchers at University of California San Diego School of Medicine, with colleagues across the country and around the world, have used whole genome analyses and chemogenetics to identify new drug targets and resistance genes in 262 parasite cell lines of Plasmodium falciparum — protozoan pathogens that cause malaria — that are resistant to 37 diverse antimalarial compounds.

The study, published in the January 12 issue of Science, confirmed previously known genetic modifications that substantially contribute to the parasites’ drug resistance, but also revealed new targets that deepen understanding of the parasites’ underlying biology.

“This exploration of the P. falciparum resistome — the collection of antibiotic resistance genes — and its drug-able genome will help guide new drug discovery efforts and advance our understanding of how the malaria parasite evolves to fight back,” said senior author Elizabeth Winzeler, PhD, professor of pharmacology and drug discovery in the Department of Pediatrics at UC San Diego School of Medicine.

P. falciparum is a unicellular protozoan transmitted to humans through the bite of infected Anopheles mosquitos. It is responsible for approximately half of all malaria cases. Malaria’s massively disproportionate impact on human health — the World Health Organization estimates there were 216 million cases worldwide and 445,000 deaths in 2016 — is due in part to the parasites’ particular adeptness at changing genomes to evade and resist drug treatment and the human immune system.

“A single human infection can result in a person containing upwards of a trillion asexual blood stage parasites,” said Winzeler. “Even with a relatively slow random mutation rate, these numbers confer extraordinary adaptability. In just a few cycles of replication, the P. falciparum genome can acquire a random genetic change that may render at least one parasite resistant to the activity of a drug or human-encoded antibody.”

Such rapid evolution poses significant challenges to controlling the disease, said researchers, but it can also be exploited in vitro to document precisely how the parasite evolves in the presence of known antimalarials to create drug resistance. It can also be used to reveal new drug targets.

Rather than focus upon the interaction of parasites to single compounds or investigate single suspect genes in P. falciparum, Winzeler and colleagues used whole genome sequencing and a diverse set of antimalarial compounds. The resulting dataset revealed a diversity of mutations. Resistant parasites often contained a mutation in a presumptive target gene and additional mutations in other, unrelated genes.

“Our findings showed and underscored the challenging complexity of evolved drug resistance in P. falciparum,” said Winzeler, “but they also identified new drug targets or resistance genes for every compound for which resistant parasites were generated. It revealed the complicated chemogenetic landscape of P. falciparum, but also provided a potential guide for designing new small molecule inhibitors to fight this pathogen.”