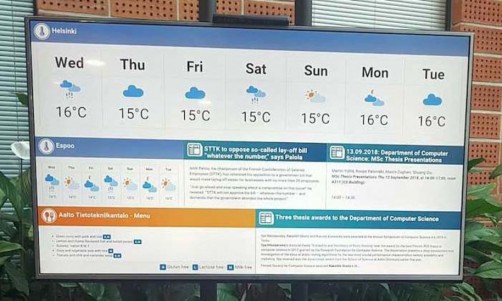 The researchers developed the model in a university context, with displays involving upcoming events, local news, and the like.

Newswise — We are constantly surrounded by screens that offer us information on the weather, current events or the latest offers from the corner shop. Yet most displays are updated manually, if at all. Researchers at Aalto University and the Finnish Center for Artificial Intelligence FCAI have developed a new, simpler way to choose and arrange public display content so that it really catches people’s attention.

‘In the past, eye-tracking devices have been used to see how people behave in front of the screen. That tells you about users’ attention, but not so much about their actual interest. We are now quantifying user interest, which hasn’t been done before,’ says Maria Montoya Freire, a postdoctoral researcher at Aalto University and the first author of the study presented at the Ubicomp conference last week.

The new method works on digital displays that have multiple content items. If certain items — like a forecasted thundershower or detour information — catch interest, the display automatically adapts to prioritise the content and how it appears. This has promise for a notable improvement to current practices in which most displays are manually updated.

‘The screen’s layout is recalculated so that interesting topics are more likely to get noticed and more information appears. For example, if weather news or bus schedules are more important than restaurant menus, our method can pick that up, and after some time they will get more prominence when the layout is re-optimised. And all of this happens automatically,’ explains Antti Oulasvirta, Professor at Aalto University and the coordinator of FCAI’s research program on Interactive AI.

Instead of eye-trackers, the new method only requires information about how much viewers spend time in front of different contents. It is based on inverse modelling, an approach that hasn’t been used until now in research on pervasive displays.

‘Most often in this field problem-solving is done by using forward modelling, where the starting point is a model, and human-like data is generated from that. Here, we’ve done the opposite: we use data to infer model parameters, which is called inverse modelling. The advantage is that it is much more accurate for characterising user behaviour,’ Montoya says.

The researchers first used synthetic data, that is, artificially produced data that shares certain similarities with original data sets, as the basis for building the model. They then gathered real-world user data by showing people changing displays with different content items simultaneously on screen. The team measured participants’ viewing time and, afterwards, participants were asked to rate their interest in the content shown.

So far, the researchers have developed and used the model in a university context, with display content involving upcoming events, local news, and the like. To extend its use to other contexts, only viewing time data from the new setting would be needed.

‘What’s novel about the method is that we don’t need eye-tracking or click data to model what people are interested in — it’s enough that the screen can measure how long people stay in front of it. We don’t need to bother viewers at all,’  Oulasvirta says.

The study builds on foraging theory, which was originally developed in biology for predicting animals’ hunting and foraging behaviour. Information foraging theory aims to characterise user behaviour when searching information or have to decide between sources.

The paper is published in Proceedings of the ACM on Interactive, Mobile, Wearable and Ubiquitous Technologies.

Journal Link: Proceedings of the ACM on Interactive, Mobile, Wearable and Ubiquitous Technologies

Proceedings of the ACM on Interactive, Mobile, Wearable and Ubiquitous Technologies