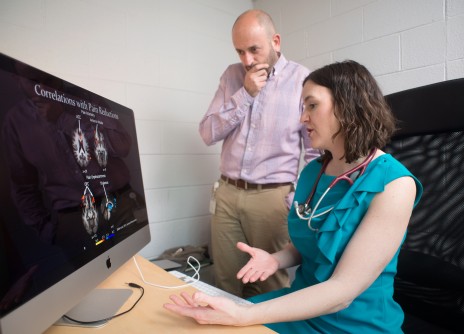 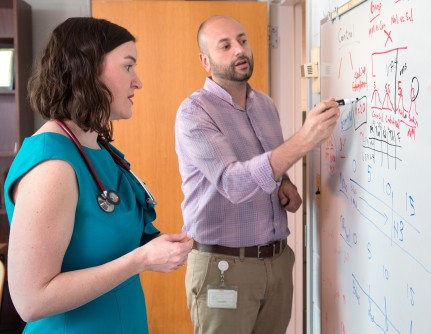 Newswise — WINSTON-SALEM, N.C. – April 8, 2015 – When Rebecca Erwin was a varsity rower at the University of North Carolina, the coach had the team’s members take a yoga and meditation class.

It had an impact.

“My teammates and I noticed that yoga and meditation improved our flexibility and focus, but also made us feel better, not just when we were rowing but in our everyday lives,” she recalled. “I wondered if yoga and meditation really have scientific benefits, especially if they have specific effects on the brain, and if so, how that works.”

Since becoming Rebecca Erwin Wells, M.D., she has done more than wonder about the effects of mind-body interventions, she has studied them.

“We’re coming to recognize that meditation changes people’s brains,” said Wells, an assistant professor of neurology at Wake Forest Baptist Medical Center. “And we’re just beginning to gain understanding of what those changes mean and how they might benefit the meditator.”

In separate clinical studies, Wells has looked into the effectiveness of a meditation and yoga program called mindfulness-based stress reduction (MBSR) as a therapy for mild cognitive impairment – problems with memory or other faculties without yet having dementia – and for migraine headaches.

In the first study, the participants were adults between 55 and 90 with mild cognitive impairment. Those who practiced MBSR for eight weeks had significantly improved functional connectivity in the brain’s network that is active during introspective thought such as retrieving memories, along with trends of less atrophy in the hippocampus (the area of the brain responsible for emotions, learning and memory) compared with the participants who received conventional care. These findings indicate that meditation may positively affect the areas of the brain most impacted by Alzheimer’s and thus may be capable of slowing the progress of the disease.

Wells’ second study found that adults with migraines who practiced MBSR for eight weeks had shorter and less debilitating migraines than those in the control group who received standard medical care. The members of the MBSR group also had trends of less frequent and less severe attacks, and reported having a greater sense of self-control over their migraines.

“Both of these were pilot studies with small subject groups and additional research is needed, but I’m still very excited by the findings,” said Wells, who began both studies while completing fellowships at Harvard Medical School. “This type of meditation is a safe and relatively simple intervention, and if it can delay cognitive decline and help relieve migraines, it could contribute to improved quality of life for many of these individuals.”

In his research Zeidan has demonstrated that as little as three 20-minute training sessions in mindfulness meditation can reduce pain and everyday anxiety in healthy individuals with no previous meditation experience. And through the use of a special type of imaging that captures longer-duration brain processes more effectively than a standard MRI scan, he has identified the specific brain mechanisms involved.

In Zeidan’s pain study, participants graded the pain caused by a device that heated a small area of their skin to 120 degrees. They rated the pain they felt while they meditated as 40 percent less intense and 57 percent less unpleasant than when they simply rested with their eyes closed. At the same time, the brain imaging showed decreased neural activity in the area of the brain involved in feeling the location and intensity of pain and increased activity in brain regions associated with attention and the ability to regulate emotions.

In the anxiety-related research, the subjects reported decreases in everyday anxiety of as much as 39 percent after practicing meditation. The scans of their brains while they meditated, meanwhile, showed increased activity in areas of the cortex associated with regulating thinking, emotions and worrying.

“In these studies we’ve been able to get a better sense of the brain regions associated with reducing pain and anxiety during meditation,” Zeidan said. “Basically, by having people meditate while their brains are being scanned we’ve been able to objectively verify what people like Buddhist monks have been reporting about meditation for thousands of years.”

Zeidan and Wells are currently working together on two new research trials. One, led by Zeidan, will attempt to determine more precisely how mindfulness meditation reduces pain and improves health. The other, led by Wells, will further investigate her pilot study’s findings about meditation and migraines with a larger number of participants. “Our research shows that meditation produces robust effects in behavior and in the brain and may provide an effective way for people to substantially reduce their pain,” Zeidan said. “What we have to do now is continue to find out exactly how it works and what it involves.” 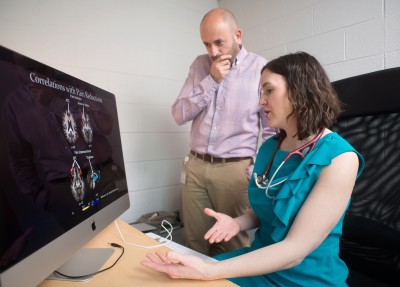 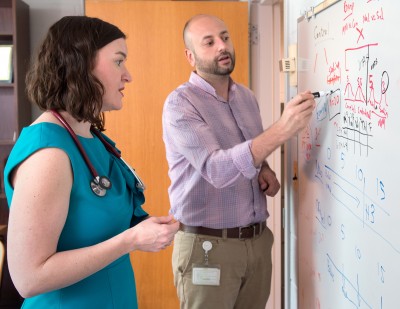