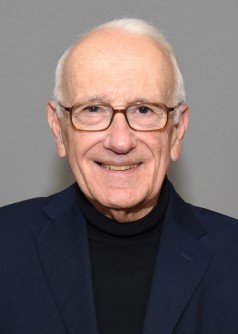 Newswise — INDIANAPOLIS – New research by scientists at the MRC Laboratory of Molecular Biology in the United Kingdom and Indiana University School of Medicine gives the most detailed view yet of tau protein structures found in Alzheimer’s disease.

The team of the MRC scientists—led by Michel Goedert, MD, PhD, and Sjors Scheres, PhD—along with IU Distinguished Professor Bernardino Ghetti, MD, and Assistant Research Professor Holly Garringer, PhD, of the IU School of Medicine Department of Pathology and Laboratory Medicine, are the first to present high-resolution structures of tau filaments from the brain of a patient with a confirmed diagnosis of Alzheimer's disease.

Dr. Ghetti said their findings, published online July 5 in Nature, represent one of the major discoveries of the past 25 years in the field of Alzheimer’s disease research.

“This is a tremendous step forward,” Dr. Ghetti said. “It’s clear that tau is extremely important to the progression of Alzheimer’s disease and certain forms of dementia. In terms of designing therapeutic agents, the possibilities are now enormous.”

Tau proteins are a stabilizing element in healthy brains, but when they become defective, the proteins can form bundles of filaments—or tangles—known as the primary markers of Alzheimer’s and other neurodegenerative diseases. But tau filaments are invisible at the light microscope, Dr. Ghetti said, and without high-resolution images showing their atomic structure, it has been difficult to decipher their role in the development of these diseases.

That’s why the research team used an imaging technique called cryo-electron microscopy, which studies samples at very low temperatures, to see atomic-level detail in the structures of these proteins. Dr. Ghetti and Dr. Garringer studied multiple brain areas and DNA of the Alzheimer’s disease patient to facilitate the analysis of tau proteins by cryo-electron microscopy.

Dr. Ghetti said the new images and analysis could help scientists better understand the molecular mechanisms that cause Alzheimer’s disease and identify new strategies for the prevention, diagnosis and treatment of this and other neurodegenerative diseases.

Dr. Goedert is internationally known for his contribution to the biology of tau and other proteins involved in neurodegeneration.

Dr. Scheres is one of the most advanced experts in the study of the structure of protein machinery.

This research was funded by the U.K. Medical Research Council, the European Union, the United States National Institutes of Health and IU School of Medicine.