13-Jul-2017 12:05 PM EDT, by University of Minnesota College of Science and Engineering
favorite_border 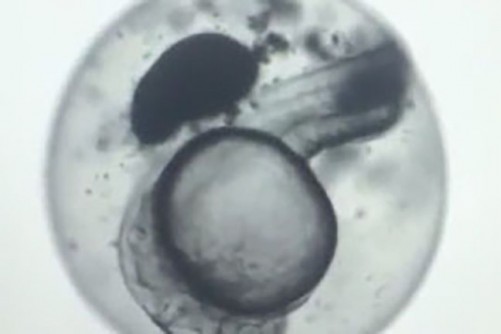 The research uses new gold nanotechnology and lasers to warm the embryo–the stumbling block in previous studies. The results have profound implications for human health, wildlife conservation, and aquaculture.

Newswise — MINNEAPOLIS / ST. PAUL (07/13/2017) — For more than 60 years, researchers have tried to successfully cryopreserve (or freeze) the embryo of zebrafish, a species that is an important medical model for human health. In a new study, researchers at the University of Minnesota and the Smithsonian Conservation Biology Institute (SCBI) provide the first-ever reproducible evidence for the successful cryopreservation of zebrafish embryos.

The study uses new gold nanotechnology and lasers to warm the embryo—the stumbling block in previous studies. The results have profound implications for human health, wildlife conservation, and aquaculture.

The research is published today in ACS Nano, a leading scientific journal published by the American Chemical Society.

“There’s no doubt that the use of this technology, in this way, marks a paradigm shift for cryopreservation and the conservation of many wildlife species,” said Mary Hagedorn, an SCBI research scientist and paper co-author who has been working on cryopreserving zebrafish embryos since 1992.

“To get anything to work at such cold temperatures, you usually have to get creative. Here we take a unique approach by combining biology with an exciting engineering technology to do what has been impossible previously: to successfully freeze and thaw a fish embryo so that the embryo begins to develop, rather than falls apart,” Hagedorn added.

By freezing sperm, eggs and embryos, conservationists can safeguard at-risk species and their genetic diversity, making it possible to bolster the genetic pool and therefore health of wild populations years—or even centuries—later. Although scientists have successfully cryopreserved the embryos of many mammal species and the sperm of many species of fish, freezing fish embryos proved infinitely more complicated.

Successful cryopreservation of an embryo requires cooling the embryo to a cryogenically stable state, then warming it at a rate faster than it was cooled, and using an antifreeze (or cryoprotectant) to stop the growth of ice crystals, which are like pins in a balloon that pop the membrane and cause the embryo to fall apart. Fish embryos, however, are very large, making it difficult to thaw them quickly and avoid ice crystal development. In addition, because aquatic animals need to survive harsh environments, their embryonic membranes are mostly impenetrable, blocking the cryoprotectants out.

Enter laser gold nanotechnology, a rapidly growing technological field being developed for cryopreservation applications by University of Minnesota Mechanical Engineering Professor John Bischof that was critical for the success of the study and has a wide variety of biomedical applications.

“Lasers have the exciting ability to act like a “light switch” that can turn biological activity on and off within gold nanoparticle laden biomaterials,” said Bischof, senior author of the study. “In this case, by careful engineering and deployment of gold nanoparticles within a cryogenically stored and biological inactive embryo, we can use a laser pulse to quickly warm the embryo back to ambient temperatures and switch biological activity, and therefore life, back on.”

Gold nanorods are tiny cylinders of gold that convert absorbed light (from a laser, for example) into heat. The study’s authors injected both the cryoprotectant and nanogold particles into the embryos. The gold particles transferred heat uniformly throughout the embryo when hit with a laser, warming the embryo from -196 degrees C to 20 degrees C in just one thousandth of a second. The amazingly fast warming rate, in combination with the cryoprotectant, prevented the formation of lethal ice crystals.

Embryos that underwent this process went on to develop at least to the 24-hour stage where they developed a heart, gills, tail musculature and moved—proving their post-thaw viability.

The study’s authors next aim to fine-tune the process to ensure that they can increase the survival rate of the embryos. They will also investigate the use of automation to bolster how many embryos they can successfully thaw at once.

Because the embryos of other aquatic animals—fish, amphibians and coral—are very similar to those of zebrafish, this technology is directly applicable to the cryopreservation of many species’ embryos. The technology may also be customized to cryopreserve reptile and bird embryos and enhance the process of cryopreserving mammalian embryos, including giant pandas and large cats. In addition, the technology can help aquaculture farms become more efficient and cost effective, putting less pressure on wild populations.

Human health researchers use zebrafish—which have a genome similar to that of humans—as important disease models to study melanoma, heart disease and blood disorders, among other health issues. Cryopreserved zebrafish embryos will prevent the scientists from losing entire research lines and will give them the flexibility to bring the lines back as needed.