As fall and spring temperatures rise, animals will increasingly have to deal with rapid "snap freezes."

9-Apr-2015 10:05 AM EDT, by University of Florida Institute of Food and Agricultural Sciences
favorite_border 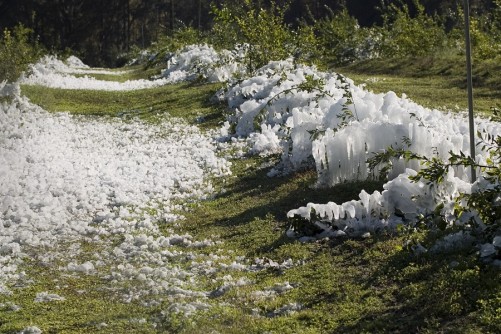 As fall and spring temperatures rise, animals will increasingly have to deal with rapid changes from warm conditions to dangerous cold snaps.

Newswise — GAINESVILLE, Fla. --- As worldwide temperatures rise and the earth sees extreme weather conditions in both summer and winter, a team of researchers with the University of Florida and Kansas State University have found that that there is potential for insects - and possibly other animals - to acclimate and rapidly evolve in the face of this current climate change.

“Organisms can deal with these stressful transitions from warm to cold by either acclimating - think about dogs putting on their winter coats - or by populations genetically evolving to deal with new stresses, a phenomenon known as rapid climate adaptation,” said Alison Gerken, a post-doctoral associate with UF’s Department of Molecular Genetics and Microbiology and the lead author of a new study, published this month in the journal Proceedings of the National Academy of Sciences.

While much of the emphasis regarding climate change is on overall warming, increased frequency of extreme weather events is also a critical concern. As fall and spring temperatures rise, animals will increasingly have to deal with rapid changes from warm conditions to dangerously cold temperatures as weather fronts sweep through. These “snap freeze” events threaten a variety of plants from agricultural crops to landscaping that are damaged and animals like insects, frogs, and even sea turtles that can suffer from cold.

“The ability to respond to longer-term seasonal changes does not impede the ability to respond to rapid changes associated with short-term extreme cold events,” said Daniel Hahn, associate professor of insect physiology with UF’s Institute of Food and Agricultural Sciences’ Department of Entomology and Nematology. “We have identified a series of about 100 candidate genes that could explain the ability of animals to rapidly respond to fluctuating temperatures.” “Identifying which of these candidate genes actually causes variation in responses to cold snaps will give us the potential to understand whether evolution to climate change can occur in both wild and domesticated animals, allowing us to better predict which species or breeds will be “winners” and “losers” and to better mitigate the effects of anthropogenic climate change on a wide range of organisms from beneficial pollinators to invasive pests,” said Theodore Morgan an associate professor of evolutionary genetics in the Division of Biology at Kansas State University and senior author of the study.

Gerken, Hahn, and Morgan say identifying the genes involved in acclimation to temperature and the genetic relationship between long-term and short-term acclimation provides us with new tools to predict the impacts of an increased frequency of extreme events as a by-product of anthropogenic climate change on animal and plant populations.

Other researchers include Olivia Eller of Kansas State University.