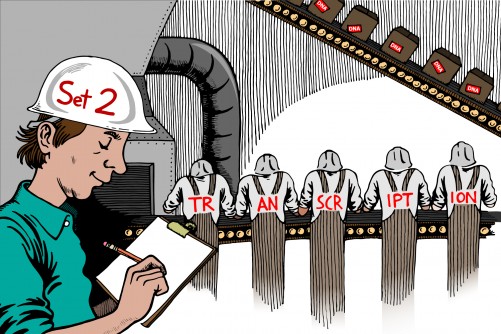 Newswise — CHAPEL HILL, NC – UNC School of Medicine researchers have cracked a long-standing mystery about an important enzyme found in virtually all organisms other than bacteria. The basic science finding may have implications for understanding cancer development and how to halt it.

Researchers have known that the enzyme Set2 is important for transcribing genes – the process of making strands of RNA from the DNA. Transcription is critical for making proteins and other functional molecules. But Set2’s precise role in transcription hasn’t been clear. Now, UNC scientists discovered that the enzyme is particularly important for keeping transcription working properly when cells are under stress. Without Set2, cells that become stressed through the lack of nutrients begin mis-transcribing genes in a way that prevents cells from adapting properly to the stress.

“We think this solves a mystery about the purpose of Set2, and we now understand much better how gene transcription is prevented from happening at the wrong place and time,” said study senior author Brian Strahl, PhD, professor of biochemistry and biophysics and member of the UNC Lineberger Comprehensive Cancer Center.

Set2 enzymes in yeast and other lower organisms have close relatives in all animal species and plants. Its human cousin SETD2 is often found mutated in cancerous cells.

“These fundamental findings may help explain how SETD2 mutations could lead to inappropriate transcription within genes, which might then promote cancer initiation or progression,” Strahl said. His team’s research on SETD2 is ongoing.

The research, published in Cell Reports, involved collaboration between Strahl’s laboratory and that of Ian J. Davis, MD, PhD, associate professor of pediatrics and genetics at the UNC School of Medicine and member of the UNC Lineberger Comprehensive Cancer Center.

The discovery comes 15 years after the first studies of Set2 by Strahl and others, who found that the enzyme works by attaching molecules known as methyl groups to a support protein – or histone – around which DNA is spooled.

This methyl-attaching process is called methylation. Research has shown in recent years that the particular histone methylation performed by Set2 serves as a quality control check on gene transcription.

Transcription of a gene should start at a precise spot at the beginning of a gene and then continue until the end in order to fully transcribe the RNA. But in the absence of histone methylation laid down by Set2, transcription begins at the wrong places in the middle of a gene instead of at the beginning. If that is allowed to happen, the production of “cryptic” RNA transcripts can then interfere with the normal expression of a gene. The mis-expression of our genetic material can result in diseases such as cancer.

Strahl’s team thought Set2 might have something to do with these cryptic transcripts arising during stress. Previously, it was shown that Set2’s histone-methylating activity has the effect of attracting another enzyme to clear away chemical tags in the middle of a gene that, otherwise, can lead to inappropriate new transcription from within that gene.

“But under typical laboratory conditions, the deletion of Set2 and the subsequent increase in cryptic transcripts didn’t seem to harm cells very much,” Strahl said.

Strahl’s team then thought about cells under stress, which is what cells are like in disease states. His team conducted experiments to observe what happens in cells that don’t have Set2 when vital nutrients are removed. In this stressed state, cells normally activate a complex set of gene expression programs to help cope with the reduced nutrient resources.

The scientists examined yeast cells that were deprived of nutrients, or were exposed to chemicals that reliably trigger the low-nutrient response. In these cells, not having Set2 proved to have major consequences.

“We found that this inappropriate transcription at the wrong place in genes exploded to high levels in stressed cells, and often interfered with the normal genes,” Strahl said. “As a result, the normal changes in genes that help cells survive under low-nutrient conditions did not happen correctly, and the cells became extremely sick.”

To Strahl and colleagues, the finding suggests that Set2 evolved to guard against harmful abnormal transcription in times of stress, when cells seem particularly vulnerable to this type of error. Why would cells be so vulnerable to cryptic transcription during the nutrient stress response? Strahl isn’t sure. But his team suspects that when there’s a sudden and widespread rearrangement of the molecular machinery of gene transcription, genes across the genome are left relatively open to inappropriate transcription.

“We found that a lot of the genes that show this crazy jump in cryptic transcription were not even related to the nutrient stress response,” Strahl said. “It’s as if there are genes throughout the genome that are just predisposed to this error, especially at this time when transcription is shifting dramatically.”

Strahl and Davis and their colleagues plan further research to determine why cryptic transcription rises so dramatically during nutrient stress. They also intend to find out whether Set2 is important for safeguarding transcription during other types of cellular stress.

In addition, the scientists are now studying Set2’s human counterpart, SETD2, which for unknown reasons is often mutated in tumor cells, especially in kidney cancers.