The VP40 protein, encoded by one of Ebola’s seven genes, has a region that is crucial for binding to the human lipid, phosphatidylserine. FDA approved drugs that disrupt this interaction inhibit Ebola infection in cell culture. 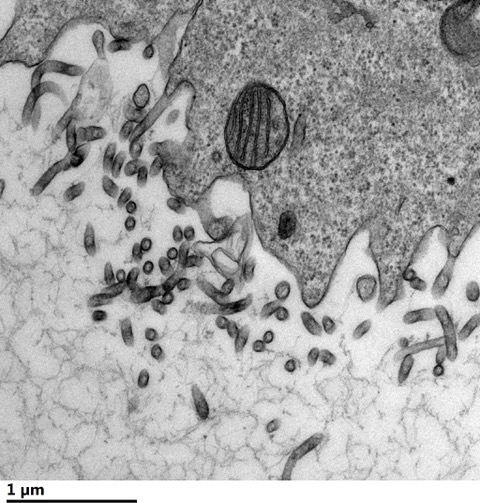 Using transmission electron microscopy, virus-like particles are seen near the membrane of a human cell expressing the Ebola VP40 protein.

Newswise — SAN DIEGO, CA – Robert Stahelin studies some of the world’s deadliest viruses. Filoviruses, including Ebola virus and Marburg virus, cause viral hemorrhagic fever with high fatality rates. Stahelin, professor at Purdue University, examines how these viruses take advantage of human host cells. His latest research, which he will present on Wednesday, February 19 at the 64th Annual Meeting of the Biophysical Society in San Diego, California, show how Ebola interacts with a human lipid and that FDA approved drugs that alter lipids block Ebola infection in cells.

Ebola virus causes a rare, often deadly, highly contagious, disease characterized by fever, vomiting, diarrhea, and internal bleeding. “I became interested in how these viruses are working in the body in a way that causes such harsh death,” Stahelin says. Filoviruses have lipid envelopes, they take those lipids from human cells during the infection. “I was intrigued that the virus could take human lipids and use it as its protective coat.”

For safety reasons Stahelin doesn’t work with Ebola virus itself, instead, he works with combinations of its seven genes so the virus can’t fully replicate. His latest focus has been on Ebola’s VP40 protein, encoded by one of the seven genes. “VP40 forms the virus’s matrix layer, a layer of protein beneath the lipid envelope. So it’s responsible for hijacking and taking the host lipid membrane to make the long viral envelope,” Stahelin explained.

Stahelin found that a part of the VP40 protein, which is made inside the host cell during infection, is important for binding to one human lipid in particular, known as phosphatidylserine or simply “PS.” Disrupting that part of VP40 reduced interactions with PS, and diminished its ability to form the viral envelope.

To see if targeting human PS might help against Ebola virus infection, Stahelin found two FDA-approved drugs that alter cellular lipid distribution—one approved for blood pressure and the other for schizophrenia treatment. Testing these drugs with live Ebola virus, in collaboration with a high-biosafety lab, shows that these drugs “were pretty good at blocking virus replication and spread in the cell culture model for the actual virus,” Stahelin said.

Though an effective Ebola vaccine was approved in December 2019, Stahelin said it is challenging to disseminate vaccines in Africa, where most Ebola outbreaks occur. And in the rare instances that an Ebola patient travels abroad before showing symptoms, it would helpful to have a prophylactic treatment for anyone exposed to the patient.  “These drugs alone or in combination might be effective at blocking the virus in humans. You would probably take them after symptoms, or if people are exposed and unvaccinated,” Stahelin said.