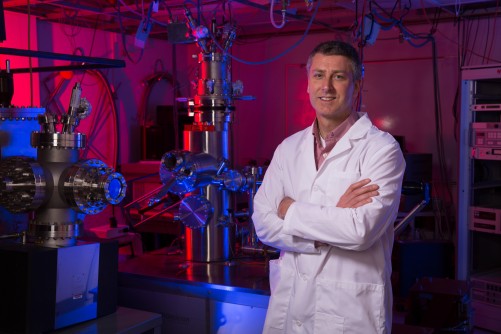 Newswise — FAYETTEVILLE, Ark. – An international team of scientists, led by physicists at the University of Arkansas, has tracked the dynamic movement of ripples in freestanding graphene at the atomic level.

This discovery advances the fundamental understanding of one of the strongest, lightest and most conductive materials, said Paul Thibado, University of Arkansas professor of physics.“Physicists have known that the ripples must be there and some experiments did find them,” he said. “But they could only measure the ripples as static in time. The theory requires that they fluctuate, more like looking at an ocean with waves. The thermal energy needs to vibrate. Up until our experiment no one had successfully measured this dynamic property of the ripples.”

The team published its findings on Monday, April 28, in Nature Communications, an online journal published by the journal Nature, in a paper titled “Unusual ultra-low frequency fluctuations in freestanding graphene.”

Freestanding graphene could emerge as a replacement for silicon and other materials in microprocessors and next-generation energy devices, but much remains unknown about its mechanical and thermal properties.

Graphene, discovered in 2004, is a one-atom-thick sheet of graphite. Electrons moving through graphite have mass and encounter resistance, but electrons moving through graphene are massless and therefore encounter much less resistance. This makes graphene an excellent candidate material for future energy needs, as well as for use in quantum computers, to enable enormous calculations with little energy use.

The study was led by Peng Xu, a postdoctoral research associate in the department of physics in the J. William Fulbright College of Arts and Sciences at the University of Arkansas.

Xu and Thibado used scanning tunneling microscopy, which produces images of individual atoms on a surface, to measure ultra-low frequency fluctuations in a one-square-angstrom region of freestanding graphene. An angstrom is a unit of length equivalent to one hundred millionth of a centimeter.

These fluctuations, known as intrinsic ripples, have been exceedingly difficult to study because their vertical movement usually creates blurry images, Thibado said. The University of Arkansas researchers successfully produced clear images, enabling them to present a model from elasticity theory to explain the very-low frequency oscillations. In physics, elasticity is the tendency of solid materials to return to their original shape after being deformed.

In the last decade, theoretical physicists predicted a bending mode in two-dimensional material graphene that couples to a stretching mode of the graphene. Without that bending and coupling, freestanding graphene wouldn’t exist, Thibado said.