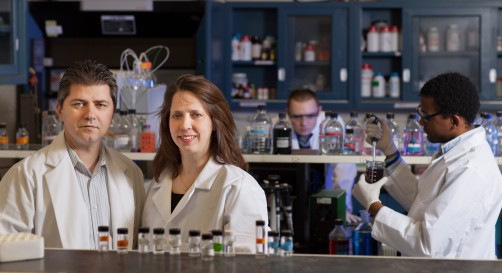 Clarkson University Assistant Professor of Chemistry and Biomolecular Science Costel C. Darie, left, and Alisa G. Woods, a researcher at both Clarkson University and the SUNY Plattsburgh Center for Neurobehavioral Health, are researching how saliva tests can be used to one day diagnose autism. The researchers have published the first study showing that children with autism spectrum disorder have differences in protein levels in their saliva when compared to typically developing children.

Newswise — A spit test may one day be able to diagnose autism according to researchers at Clarkson University and the State University of New York at Plattsburgh.

Scientists at the universities have published the first study showing that children with autism spectrum disorder have differences in protein levels in their saliva when compared to typically developing children. The study appeared in the Jan. 27 issue of the journal Autism Research.

Autism spectrum disorder currently affects one in 68 children in the United States, and the number of people diagnosed with autism continues to rise. Diagnosis is currently made based on behavioral observations, and no biological test for autism exists. A biological test could aid in earlier diagnosis, helping to direct people with autism to interventions.

"We found nine proteins that were significantly elevated in the saliva of the people with autism and three that were lower or even absent," said Alisa G. Woods, a researcher at both Clarkson University and the SUNY Plattsburgh Center for Neurobehavioral Health who is one of the researchers leading the study. "This is the first study to identify these changes in saliva, which is a relatively easy biofluid to obtain for clinical use or research."

The proteins identified primarily have functions in immune system responses or are elevated in people with gastrointestinal problems. The scientists also reported that several of the identified proteins interact with one another.

"We are the first in the world who proposed a protein complex as a potential biomarker signature, which gives us information not only about the proteins, their relative quantities and their modifications, but also about their interactions with other proteins," said Clarkson Assistant Professor of Chemistry and Biomolecular Science Costel C. Darie, a co-lead author and proteomics expert.

The work is promising for the eventual development of an autism diagnostic test, but more subjects need to be studied to confirm the markers are consistently different in people with autism.

"We have found some interesting proteins that are different from children with autism compared with controls, and I think the next stage would be to increase the pool of samples to confirm those findings," Ngounou said.

The group plans to further study these protein differences in larger groups of children with autism and also in specific subtypes of autism.

The article can be read online at https://www.researchgate.net/publication/269396345_A_Pilot_Proteomic_Analysis_of_Salivary_Biomarkers_in_Autism_Spectrum_Disorder .