Resistance to Antibiotics Is Ancient 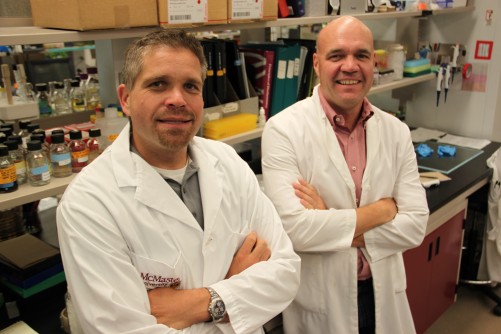 Newswise — Hamilton, ON (August 31, 2011) – Scientists were surprised at how fast bacteria developed resistance to the miracle antibiotic drugs when they were developed less than a century ago. Now scientists at McMaster University have found that resistance has been around for at least 30,000 years.

“Antibiotic resistance is seen as a current problem and the fact that antibiotics are becoming less effective because of resistance spreading in hospitals is a known fact,” said Wright. “The big question is where does all of this resistance come from?”

After years of studying bacterial DNA extracted from soil frozen in 30,000-year-old permafrost from the Yukon Territories, the researchers were able to develop methods to isolate DNA within McMaster’s Ancient DNA Centre. Using state-of-the-art molecular biological techniques, methods were developed to tease out small stretches of ancient DNA.

Researchers discovered antibiotic resistant genes existed beside genes that encoded DNA for ancient life, such as mammoths, horse and bison as well as plants only found in that locality during the last interglacial period in the Pleistocene era, at least 30,000 years ago. They focused on a specific area of antibiotic resistance to the drug vancomycin, a significant clinical problem that emerged in 1980s and continues to be associated with outbreaks of hospital-acquired infections worldwide.

“We identified that these genes were present in the permafrost at depths consistent with the age of the other DNAs, such as the mammoth. Brian Golding of McMaster’s Department of Biology showed that these were not contemporary, but formed part of the same family tree. We then recreated the gene product in the lab, purified its protein and showed that it had the same activity and structure then as it does now.”

This is only the second time an ancient protein has been ‘revived’ in a laboratory setting.

Wright said the breakthrough will have important impact on the understanding of antibiotic resistance: “Antibiotics are part of the natural ecology of the planet so when we think that we have developed some drug that won’t be susceptible to resistance or some new thing to use in medicine, we are completely kidding ourselves. These things are part of our natural world and therefore we need to be incredibly careful in how we use them. Microorganisms have figured out a way of how to get around them well before we even figured out how to use them.”

Poinar says this discovery has opened doors for ancient antibiotic resistance research. “We can go back a million years in the permafrost, which is our next goal.”

Funding for this project came from the Canada Research Chairs program, the Canadian Institutes of Health Research and the Natural Sciences and Engineering Research Council.

A picture of Gerry Wright and Hendrik Poinar is available for downloading at:http://fhs.mcmaster.ca/media/media_20110823.html