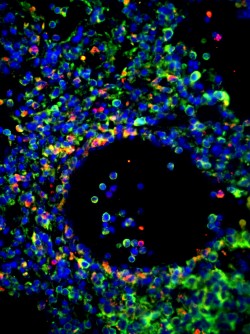 Newswise — McGill researchers, led by Dr. Maya Saleh of the Department of Medicine, have identified an enzyme, cIAP2 that helps the lungs protect themselves from the flu by giving them the ability to resist tissue damage. “It’s a discovery that offers exciting new avenues for controlling influenza, since until now attempts to target the virus itself have proven challenging, especially in the face of emerging new strains of the virus,” says Saleh, who is also a researcher at the Research Institute of the McGill University Health Centre (RI-MUHC). “The results from our study now suggest that one effective way of countering influenza infections may instead be offered by enhancing the body’s resistance to the virus.”

Like many other battles, fighting the flu is a combination of both control and defense.

On the one hand, on the control end of the process, our immune system comes into play to prevent the virus from replicating inside our cells, and attacking with increasing strength. At the same time, on the defensive side, our bodies need to actively resist the destruction and harmful cell death that is caused by the virus.

By investigating the role played by cIAP2 in mice with the H1N1 influenza A virus, what Saleh and her team discovered was that the enzyme is necessary to control the nature of cell death during influenza infection. They found that cIAP2, which functions by modifying and activating survival factors in the cell, steers the body away from an inflammatory and auto-destructive process known as necrotic death. The enzyme is, in effect, a gatekeeper of cell death.

In its absence, the same factors that depend on cIAP2 to keep the cell alive, reveal a destructive side and induce a harmful form of cell death. cIAP2 therefore not only protects the infected cells from dying in such a manner, but also protects uninfected neighbouring cells in the same tissue. By doing so, this enzyme increases the resistance of the lung to influenza infection and associated pathology.

The researchers believe that the identification of this pathway of resistance to flu opens a number of avenues for future drug development. Ian Rodrigue-Gervais is a post-doctoral fellow in Prof. Saleh’s lab and one of the authors on the paper. According to him, what is truly exciting about this discovery is that it suggests that it may be possible to suppress features of flu-inflicted tissue injury. “What we saw in this study is that if the enzyme cIAP2 is present, the host can better tolerate the infection and then reduce the illness.”

This research was funded by the Canadian Institutes for Health Research the Burroughs Wellcome Fund, the Fonds de recherche en santé du Québec (FRSQ), the Canadian Association of Gastroenterology (CAG)/Abbott, the Strauss Foundation, the Kidney Cancer Association and the National Institutes of Health.