Predators, urbanization and high water among challenges faced by shorebirds

5-Jul-2017 9:00 AM EDT, by SUNY College of Environmental Science and Forestry
favorite_border 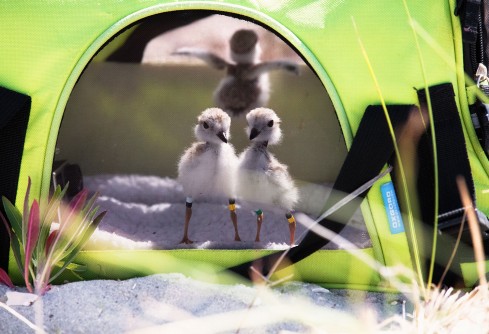 Plovers, shown here in a pet carrier, were recaptured to take measurements including weight, wing length, bill length and tarsus (leg) length. The chicks were recaptured every five to seven days to monitor their growth rates. 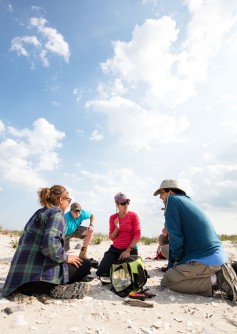 Jonathan Cohen (right) and Michelle Stantial (center) of ESF are among the researchers working to protect piping plovers. This photo was taken at Barnegat Lighthouse State Park in Barnegat Light, New Jersey, in 2016.

Newswise — High water on Lake Ontario, urbanization of the New Jersey shore and a growing predator population are among the challenges facing one of America’s iconic shorebirds and the conservationists determined to restore the bird’s population.

Piping plovers are found along the Atlantic Coast and in the Great Lakes and Midwest regions. Unique to North America, the birds nest on open, sandy beaches, making them vulnerable to predators and the dangers of being in close proximity to humans who use the beaches for recreation.

“There aren’t many shorebirds that nest out in the beaches south of the Arctic,” said Dr. Jonathan Cohen, assistant professor at the College of Environmental Science and Forestry (ESF) in Syracuse, N.Y. “They don’t control mosquitos or hold the cure for cancer in their bones. They are not hunted by humans. But they’re valuable as a unique part of the American beach. They’re unique to North America.”

Piping plovers were placed on the endangered species list in 1986 when only 700 pairs remained on the Atlantic Coast, said Cohen, who teaches in ESF’s Department of Environmental and Forest Biology. The goal for conservationists such as Cohen is to establish 2,000 pairs of piping plovers. Currently there are about 1,941 pairs, but Cohen cautions, “there’s still work to be done.”

Piping plover conservation is important because the birds nest on beaches where they interact with people, Cohen said. “They’re affected by people all the time.” Piping plovers build nests where people go for recreation, build houses and drive to go fishing. “Just about every conceivable form of coastal human activity that affects sandy beaches on the Atlantic Coasts interacts with the piping plovers and causes problems for them in terms of disturbing them when they’re trying to nest,” Cohen said. Compounding the problem is increasing predator populations that prey on the birds and their eggs.

For researchers, it’s easy to become attached to the species with young that look like they stepped out of a Pixar movie and life challenges that mirror human’s, Cohen said.

“You get to observe their behavior all the time when you’re checking their nest every day. Each bird seems to have a different personality and then the chicks hatch and they’re tiny, little, cute fuzzballs. You watch them grow and you see the things that are threats. They lose their young … and they have to start over again when they lose their nest,” Cohen said.

“They deal — like all of us do — with a lot of struggles every day, and they handle all the difficulties of living on the edge of the sea.”

Cohen and ESF graduate student Michelle Stantial are working to lessen one of those difficulties as they study the threat from predators.

Soon after piping plovers were put on the endangered list, exclosure cages — a welded-wire kind of fence about 10 feet in diameter with a soft-cover roof — were used to prevent predators from getting to the eggs. The cages allow the birds to walk in and out but keep out predators such as foxes, skunks and other birds. They were “very successful in getting more nests to hatch,” Cohen said.

Unfortunately, some predators learned the cages signaled a potential nest and would wait to attack the adults as they came out of the cage.

”Over the last 25 years people noticed this can become a real problem. Questions were asked whether it was worth it to use these exclosure cages,” said Cohen, who joined a group studying the pros and cons of using the cages.

The group developed a web-based tool that allows conservationists to enter the data on nest survival and loss of nests to abandonment (when an adult leaves the nest unattended, possibly because the adult died). Once researchers input their data, the Decision Support Tool provides information to help make a decision for a particular beach.

“Sometimes it’s hard to know. Some people panic when they lose nests and want to pull them all, but then they’re exposing the nests to predators,” said Cohen. The next phase is assisting other researchers and conservationists as they learn the system.

Cohen was the recent recipient of a $21,751 grant from the New York State Environmental Protection Fund to help restore the piping plover to Lake Ontario.

Piping plovers disappeared from Lake Ontario in 1984, and came back in 2015, staying on the east end in small numbers. “They didn’t succeed in nesting in 2016 but hopefully they’ll try again this year.”

The Lake Ontario return may be the result of efforts on the western Great Lakes. Since 1986, the numbers of pairs – mostly on Lake Michigan – have increased. “Now that they are having better reproductive success, the population is expanding,” said Cohen. “So I think in 2015 we benefited from the efforts out to the west. “

The plover conservation community in New York is looking at ways to protect and restore habitat to get its population to solidify its foothold and grow, he said. However, high water levels from heavy spring rains may hamper this year’s nesting. “It has prevented plovers from nesting there so far this year,” Cohen said. One bird was seen at Sandy Island Beach State Park in mid-May but it didn’t stay. As of the beginning of June, one other bird was seen foraging in the area. “We hope if the water comes down some more we will get some late nesting.  But if that was going to happen, it would have to be in the next couple of weeks,” said Cohen.

Stantial, a graduate student working on her Ph.D., is studying piping plovers in New Jersey. While the Atlantic Coast piping plovers, in general, have been doing relatively well in the last 20 years, New Jersey is “a little different,” she said.

Since the species was placed on the endangered species list, observers have seen no increases in abundance in New Jersey. “We’re trying to figure out why and what we can do to help increase the number of nesting pairs and increase productivity in New Jersey specifically,” she said.

“I think a lot of it has to do with the lack of habitat. If you think about the New Jersey coastline, there are a lot of barrier islands but a lot of it’s been built up by people,” she said.

Holgate and Barnegat Light are two study sites located on Long Beach Island, New Jersey. Three pairs were noted at Barnegat Light in 2016 and 24 pairs at Holgate. “Holgate is sort of the crown jewel of central New Jersey,” Stantial said. “It’s got a natural system and there’s a lot of overwash (where beach sediments move across a dune area).”

Holgate, which is home to part of the Edwin B. Forsythe National Wildlife Refuge, is a two-and-a-half mile portion of the beach and marshland that is closed from March 1 to Sept. 1. This gives animals, including the piping plovers, a large window to carry out nesting and other activities undisturbed. “They have a whole season human-free,” she said.

Field observations will continue this summer, followed by data analysis and recommendations for specific management that will maximize ideal piping plover breeding habitat and minimize the effects of predation and human disturbance, according to Stantial. A piping plover data collection app is also being developed where people can collect the same type of data all along Atlantic Coast to go into one database.

Piping plovers are highly adapted to the dynamic ecosystem of the overwashes, she said. “They like those kinds of spots.”

Those spots are often created when hurricanes hit the coast; however, if a hurricane hits too early in the season, it can be detrimental to the bird’s reproductive season.

“If a hurricane strikes while they have nests on the ground it would cause a widespread loss of their reproductive effort that year,” said Cohen, “but the hurricanes tend to reshape the coast in a way that’s good for piping plovers. They like open sand, and the vegetation gets knocked back by storms. “

The birds forage in mudflats that are created when storms deposit sand in tidal areas. “So they really evolved to take advantage of habitat created by storms,” Cohen said.

However, rising sea levels and beach erosion could prove too much for piping plover nesting grounds. In an effort to predict where the piping plovers habitat will be over time, models have been run by Virginia Tech and the U.S. Geological Survey to predict the effect that sea level rise and climate change will have on the coast.

“There’s probably places where new habitat will arise, but a lot of places where it may be gone after the sea level gets too high for barrier islands to persist,” said Cohen.