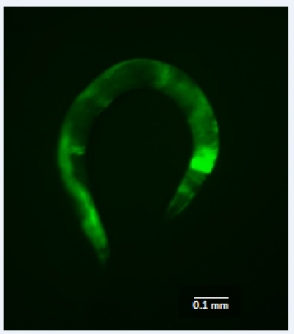 In this mutant worm, about 1/20 of an inch long, green fluorescence marks areas of biological stress from malfunctioning mitochondria

Newswise — Philadelphia, April 15, 2015 – Rooted in malfunctions in the tiny power plants that energize our cells, mitochondrial disorders are notoriously complex and variable, with few effective treatments. Now, novel findings in microscopic worms may hold great promise for children and adults with mitochondrial disorders. By using existing human drugs to improve metabolism and restore shortened lifespans in these laboratory animals, scientists have set the stage for human clinical trials of possible innovative therapies for mitochondrial disease.

Mitochondria are present in up to several hundred copies in nearly every cell, but when they don’t work properly, they impair many systems in the body by short-circuiting normal energy flow. While primary mitochondrial disorders are individually rare, hundreds of them exist, collectively affecting at least one in 5,000 individuals. Abnormal mitochondrial functions also play important roles in common conditions such as type 2 diabetes, epilepsy, Alzheimer’s disease, and even human aging.

“This work carries strong promise for identifying effective therapies for mitochondrial diseases,” said study leader Marni J. Falk, M.D., director and attending physician in the Mitochondrial-Genetic Disease Clinic at The Children’s Hospital of Philadelphia (CHOP). “The drugs we used in this study improve cellular signaling in ways that could directly benefit patients. As all but one of the drugs are currently prescribed for other diseases, they’re already available to now test in clinical trials in patients with mitochondrial disease.”

Falk and colleagues published their study online March 3 in the journal Mitochondrion.

The current research focuses on the respiratory chain, a set of five enzyme complexes that together are a crucial site of energy production inside mitochondria. In respiratory chain (RC) defects, common culprits in many mitochondrial disorders, cells fail to properly produce energy. The most common site of RC dysfunction is complex I, a group of proteins that normally generates a key metabolic product, nicotinamide adenine dinucleotide (NAD+).

NAD+ normally regulates hundreds of other chemical reactions within the cell. When genetic mutations disrupt complex I proteins and the metabolic conversion of NADH to NAD+, patients may suffer often-severe energy shortages in the heart, brain, eyes, muscles and many other parts of the body.

The researchers tested a series of drugs currently used to treat patients with diabetes or lipid disorders. One drug, nicotinic acid, is a form of niacin (vitamin B3) that has been used for decades to treat patients who have high triglycerides in their blood.

The C. elegans worms had mutations that directly impaired their complex I function and shortened their lifespans. Nicotinic acid restored the worms’ lifespans to that of normal animals. It also restored the levels of NADH, enabling it to play its crucial role of initiating the transport of electrons in the RC that is necessary to produce cellular energy, as well as regulating many other cellular processes.

The team showed that other available human drugs also improved key metabolite levels in C. elegans. “In contrast to research that aims to repair defective mitochondria, we are bypassing the damaged mitochondria and focusing instead on how cells respond to mitochondrial problems,” said Falk. “We’re restoring the ratio of critical metabolic precursors and products that control signaling pathways, thereby improving overall cellular health in respiratory chain diseases.”

Mitochondrial diseases, she added, are highly complex, but her team’s series of nematode studies have revealed fundamental conserved processes that are disrupted in mitochondrial disease. The study team carefully deciphered many of the biological mechanisms at work, marked by changes in oxidant levels, genome expression patterns and other major physiological effects. “Although some specific mechanistic details may differ, we’re looking at how the effects of different drugs may converge to promote an organism’s health and survival,” she said.

Falk and colleagues are now planning a pilot clinical trial in children with complex I deficiencies to determine whether the effects seen in the animals will translate to meaningful clinical benefits in patients. Ultimately, she expects the complexity of mitochondrial biology will dictate that effective treatments will require combination therapies specific to restoring signaling pathways that are commonly disrupted in major subtypes of mitochondrial disease. “We’re enthusiastic that we have reached a major threshold on the path toward bringing important new therapies to a very challenging group of diseases,” she added.

Funds from the National Institutes of Health (grants HD065858, HD026979, DK094723, and GM097409), the Philadelphia Foundation and the American Heart Association supported this research.