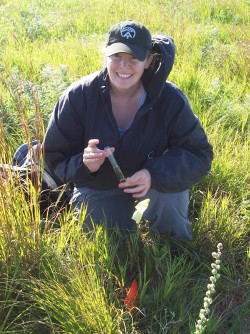 Newswise — When it comes to restoring grasslands, ecologists may have another way to evaluate their progress—ants.

The more diverse the ant population, the closer a restored section of grassland is to its original state, according to Laura Winkler, who recently completed her master’s degree in plant science, specializing in entomology, at South Dakota State University. When it comes to native grasslands, ants are “ecosystem engineers.” Ecological role of antsAnts play many ecological roles, Winkler explained. “They aerate the soil, cycle nutrients and play a role in plant defense and seed dispersal. Ants move more soil than earthworms, plus they are food for lots of reptiles and birds.”

Some ant species support colonies of plant-feeding insects, such as aphids or plant hoppers, even protecting them from predators. “It’s like having dairy cattle,” Winkler said. Through this technique, the ants consume the sugar-rich honey dew the aphids secrete, much as humans use cow’s milk. When the ants are in need of protein, they simply eat the aphids. Ants also distribute organic matter by moving dead insects into the colonies and their dead nest mates away from the colonies, Winkler added. Comparing restored, undisturbed grasslandsWinkler compared tracts of restored grasslands to undisturbed ones at three sites in eastern South Dakota--Sioux Prairie in Minnehaha County, Oak Lake Field Station in Brookings County, and Spirit Mound in Clay County. The U.S. Fish and Wildlife Service manages the restored areas, while the undisturbed area at Sioux Prairie is managed by the Nature Conservancy, Oak Lake by SDSU and Spirit Mound by the S.D. Game, Fish and Parks Department. Originally from Des Moines, Iowa, she began working with ants as an undergraduate at Iowa State University focusing on how burning and grazing affect species diversity. Her SDSU graduate research assistantship on ant biodiversity and natural history was funded through the Meierhenry Fellowship. Her research adviser was entomologist Paul J. Johnson, professor of plant science.

Variation with ageThe U.S. Fish and Wildlife Service sites that had once been crop or pasture land were restored anywhere from one to four years ago, according to Winkler. This involved taking the areas down to the bare ground and then seeding native grasses. Winkler used data from multiple sites taken over a one-year period. As expected, the younger sites had fewer ant species, with the numbers and diversity increasing over time. The restoration areas at age 1 had seven different species, while at age 2, the number had increased to nine and by age 3 to 10 species, Winkler reported. She expected the fourth year restorations to be even closer to the 17 species present in the undisturbed remnants, but what she saw was a slight decrease to eight species. “The drought last year and then a wet spring also affects that vegetation, what’s going to survive and how many of the ants are out foraging,” Winkler pointed out. She suspects that management techniques may also have played a role. “Some sites may have been burned more frequently,” she noted, to control weeds. “We’ve got a sneak peek of what can happen,” Winkler said, but more long-term research is needed. Based on other research, she anticipates that the restored areas should peak in terms of species diversity within seven to eight years. Increased specializationWinkler also looked at how these ant species function. The younger restorations areas tend to have ants that are generalists who can go anywhere, but the older restorations tend to have more specialists, such as soil-dwelling ants, who are more particular about where they live, Winkler explained. The more dominant specialists push out some of the generalists.

“You’ll have ants everywhere,” she pointed out, but the greater the diversity, the more niches are being filled, and the more successful the restoration effort.