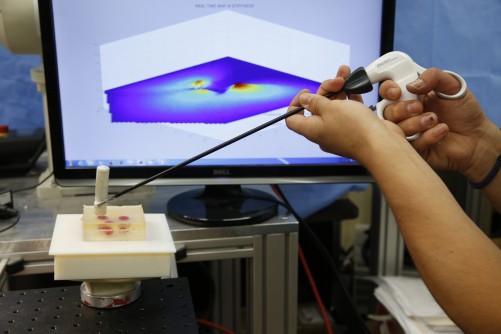 To demonstrate its capability, a palpation capsule held in the grip of a laparoscope is tapped at different locations on the surface of silicon gel which has several red marbles embedded to simulate hidden tumors. By so doing it creates a map of tissue stiffness shown on the computer display that reveals the location of the marbles.

[NOTE: A multimedia version of this story is available at http://news.vanderbilt.edu/2013/10/surgeons-sense-of-touch/]

Newswise — NASHVILLE, Tenn. – A small, wireless capsule has been developed that can restore the sense of touch that surgeons are losing as they shift increasingly from open to minimally invasive surgery.

During open surgery, doctors rely on their sense of touch to identify the edges of hidden tumors and to locate hidden blood vessels and other anatomical structures: a procedure they call palpation. But this practice is not possible in minimally invasive surgery where surgeons work with small, specialized tools and miniature cameras that fit through small incisions in a patient’s skin.

In order to provide the benefits of palpation to minimally invasive surgery, a team of engineers and doctors at Vanderbilt University headed by Pietro Valdastri, assistant professor of mechanical engineering and medicine, has designed a special-purpose wireless capsule equipped with a pressure sensor that fits through the small ports that surgeons use for what is also called “keyhole” surgery. The system is described in an article in press at the journal IEEE Transactions on Biomedical Engineering.

Once in the body, the surgeon can grip the capsule with the jaws or wire loop on the end of the laparoscope he or she is using for the surgery and press the end of capsule against the target tissue. As the surgeon taps the capsule in different places, it sends information about its position and the force being applied to a computer that uses the data to produce a false-color map of the tissue stiffness. This map can reveal the location of tumors, arteries and other important structures that the cameras can’t see because they are covered by a layer of healthy tissue.

“This capsule provides physicians with haptic feedback – in other words, it restores our sense of touch,” said Keith Obstein, an assistant professor of medicine at Vanderbilt University Medical Center who is collaborating on the capsule’s development. Although the prototype is limited to providing this information on a computer screen, “once you have the data you can use it in a number of different ways,” he said. One possibility that he suggests is using the capsule data with a commercially available “haptic glove” that would allow the surgeon to feel pressure that the capsule is exerting and how the tissue is responding almost as if they are touching it directly.

“Because palpation is so important to surgeons, there have been several previous attempts to build instruments that can provide it,” said Valdastri. “Our approach is much simpler because it isn’t attached to a rigid shaft like previous tools and so does not force the surgeon to make an additional incision in the patient to use it.”

Although laparoscopy – the technical term for minimally invasive surgery – has been around for more than a century, its use has grown substantially in the last 20 years since medical researchers have demonstrated that it is not only safer but also less expensive than open surgery for a number of different types of operations. Currently, more than two million of minimally invasive procedures are performed annually in the United States.

“The hope behind something like this capsule is that the surgeon will be able to place it inside the body through an existing incision and leave it in a position where it can be easily grasped and used to map out the stiffness or density of the tissue when needed, much like he or she would palpate it with by hand in open surgery,” said collaborator S. Duke Herrell, associate professor of urologic surgery at Vanderbilt University School of Medicine.

The palpation capsule designed at Valdastri’s Science and Technology of Robotics in Medicine (STORM) Lab is extremely simple. It is 0.6 inches wide and 2.4 inches long. It contains a pressure sensor, an accelerometer, a wireless transmitter, a magnetic field sensor and a small battery.

The pressure sensor records how hard the end of the capsule is being pushed against its target. The accelerometer records its movements. The capsule is used with a fixed external magnet and its position is tracked precisely by measuring the strength and direction of the magnetic field it experiences. The wireless transmitter sends all this information to an external antenna connected to a computer that uses the data to draw the map of tissue stiffness.

In desktop testing with tissue simulated with silicone gel, the researchers report that the capsule can measure the local stiffness of the tissue with a relative error less than 5 percent. In large animal tests, they have achieved a relative error of 8 percent. The researchers goal is to achieve a level of resolution comparable to or greater than that of human touch.

Technical work on the capsule has been done in the STORM Lab by graduate students Marco Beccani and Christian Di Natali. Additional testing and biomechanical analysis of results have been performed in collaboration with graduate student Levin Sliker, Assistant Professor Mark Rentschler at the University of Colorado, Boulder, and Jonathan Schoen, associate professor of surgery at University of Colorado School of Medicine.

Valdastri hopes to get approval to test the device in clinical trials in the next five years.