Indiscriminate use of acid-suppressive therapy may unnecessarily raise risk of serious infections, according to article in Critical Care Nurse 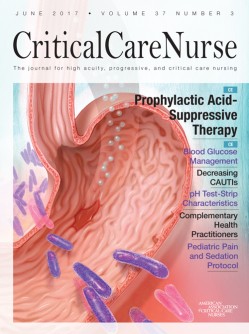 Indiscriminate use of acid-suppressive therapy may unnecessarily raise risk of serious infections in hospitalized patients, according to article in Critical Care Nurse

Newswise — Routine use of acid-suppressive therapy for all hospitalized patients, even all critically ill patients, is inappropriate and should be limited to patients who meet specific criteria, according to an article in Critical Care Nurse (CCN).

Patients who are critically ill are at increased risk of gastrointestinal (GI) ulceration and bleeding, which has led to standing orders to give stress ulcer prophylaxis (SUP) in an effort to preempt the condition. The therapy has become commonly prescribed for patients in intensive care units (ICUs), and the practice has migrated beyond the ICU to noncritically ill patients as well.

However, giving acid-suppressive therapy indiscriminately to hospitalized patients to reduce GI bleeding may also place these patients at a higher risk of pneumonia, Clostridium difficile infection and other infections.

“Prophylactic Acid-Suppressive Therapy in Hospitalized Adults: Indication, Benefits, and Infectious Complications,” published in the journal’s June 2017 issue, examines the role of SUP in select patients and contrasts that with important infectious consequences of its indiscriminate use.

The authors conducted a thorough review of published research related to the risk of infections with the use of acid-suppressive therapy to support their recommendations for restraint.

They conclude that the minimal benefit of acid-suppressive therapy in critically ill patients who are at low risk of GI bleeding and patients not in ICUs is most likely far outweighed by the risk of infection.

The article provides risk-scoring flowcharts for patients who are critically ill, as well as patients who are not, to guide clinicians through indications for initiating acid-suppressive therapy and discontinuing medications.

In the authors’ institutions, critical care providers screen patients daily for risk factors related to GI bleeding and discuss SUP during multidisciplinary care rounds. The risk-scoring tool is integrated into an electronic medical record’s decision-support technology, which may assist in appropriate prescribing. They also opted to remove SUP from standard order sets and restrict its use in non-ICU settings, which may help curb widespread overuse.

One of the most common indications for SUP is mechanical ventilation for longer than 48 hours, and other major risk factors include traumatic brain injury, spinal cord injury and respiratory failure. Sepsis syndrome, history of alcohol abuse, surgery lasting longer than four hours, renal failure and other conditions are considered minor risk factors, since evidence of an independent association with GI bleeding is not as strong.

Once risk factors are no longer present or when the patient transfers out of the ICU, SUP should be reevaluated and discontinued in most patients.

As the American Association of Critical-Care Nurses bimonthly clinical practice journal for high-acuity, progressive and critical care nurses, CCN is a trusted source of information related to the bedside care of critically and acutely ill patients.

About Critical Care Nurse: Critical Care Nurse (CCN), a bimonthly clinical practice journal published by the American Association of Critical-Care Nurses, provides current, relevant and useful information about the bedside care of critically and acutely ill patients. The award-winning journal also offers columns on traditional and emerging issues across the spectrum of critical care, keeping critical care nurses informed on topics that affect their practice in high-acuity, progressive and critical care settings. CCN enjoys a circulation of more than 107,000 and can be accessed at http://ccn.aacnjournals.org/.