The traits we inherit from our family define us in countless ways. Sometimes what we inherit remains hidden, like BRCA gene mutations which can increase your risk for developing certain type of cancers. Learn more at Basser.org. 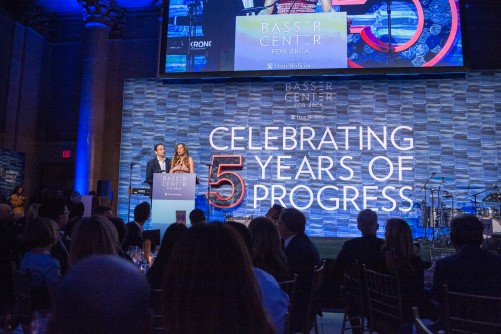 Mindy & Jon Gray address a sold out crowd of over 1,100 people at the Basser Center’s second biennial Basser Jean Bash

“Tonight, we’re asking you to take the courage to look at your genes,” said Mindy Gray. “Check your history; uncover your risk and ask others to do the same.”

Newswise — Last week, Mindy and Jon Gray addressed a sold out crowd of over 1,100 people at the Basser Center’s second biennial Basser Jean Bash. In 2012, the couple established the Basser Center for BRCA, the world’s first the world’s first center devoted to the study of BRCA-related cancers. Men and women with inherited gene mutations in either BRCA1 or BRCA2 are at a heightened risk for developing certain cancers, including breast, ovarian, prostate, and pancreatic cancer. These gene mutations can be passed on to children.

In addition to celebrating five years of remarkable progress in the understanding, prevention, and treatment of BRCA-related cancers, the Bash featured the launch of the #invisiblegenes hereditary cancer awareness campaign which encourages genetic testing and counseling so that carriers can take preventative measures.

The traits we inherit from our family define and connect us in countless ways. Sometimes these traits are obvious, like curly hair or dimples. But sometimes what we inherit remains hidden, like BRCA gene mutations.

With the help of celebrities like actress Cobie Smulders, star of television comedy series How I Met Your Mother and in the Marvel Cinematic Universe, the Basser Center for BRCA launched a video and social media campaign—with the hashtag #invisiblegenes—in the hopes that it will highlight illnesses that can be prevented or treated with early detection.

The social media campaign currently has over 260,000 views and is just the latest of the Basser Center’s efforts to raise awareness about genetic cancer risk. The Center has also partnered with more than 1,500 Jewish congregations across the country distribute posters and fact sheets with details on the cancer-risk BRCA1 and BRCA2 gene mutations – which disproportionately impact the Jewish community. And in recent years, the Center has expanded its efforts to reach individuals and families around the world, providing education and information via webinars, live seminars, and sharable messages on social media channels to help every person with or at risk for a BRCA mutation make informed choices. Under the umbrella of the Abramson Cancer Center, the Basser Center also offers remote cancer genetic services for at-risk patients. Using real-time videoconferencing in community practices, Penn’s genetic counselors are able to screen and counsel patients remotely that would otherwise not be able to utilize these services at their current location.

In the five years since the Center’s establishment, BRCA mutations and hereditary cancers have been in the public eye more than ever before. And, since 2012, the Basser Center has awarded transformative grants to 26 investigators and researchers at Penn and 12 at institutions around the world, including projects working to prevent the molecular changes in cells that lead to cancer, extend educational resources to at-risk populations, and understand racial disparities in BRCA mutations and associated cancers.

Advancements during the Basser Center’s first five years have led to the FDA approval of treatments for BRCA-associated ovarian cancer, illuminated the mechanisms that drive ovarian cancer’s resistance to chemotherapy, and spread these findings into attacking pancreatic cancer.The Basser Center’s support for  a clinical trial testing a vaccine to prevent cancer recurrence among patients with BRCA-associated cancer are moving the needle even further, with plans to test an approach that would save untold lives: harnessing the vaccine as a preventive cancer therapy for people who are at-risk of developing these diseases.